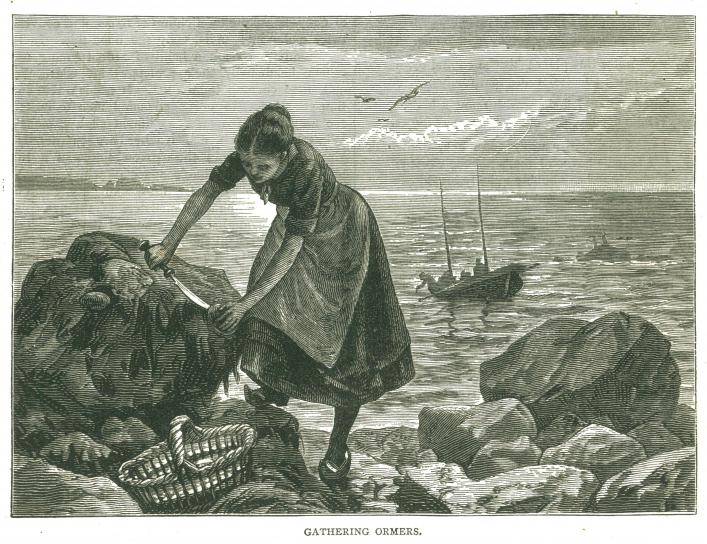 The ormer is a succulent shell-fish of the limpet species, which is plentifully found in Guernsey, Sark, and two or three other islands of the Channel group, but scarcely anywhere else in English possessions. Being a deep-water fish, it can only be gathered, or 'harvested,' as the local phrase is, at the lowest tides of the year. As the waves recede below the usual line, the coast becomes alive with a throng of busy workers of all ages and both sexes—the little towns, like that in Keats's poem, being for the nonce literally 'emptied of their folk.' The ormer is found fastened to the rocks; and its oval univalve shell, which averages five inches in length, being brown in colour and embedded in sea-weed, easily escapes the observation of unpractised eyes. Nature has given to many living things a marvellous power of self-protection; and the ormer can attach itself to the rock with a firmness that almost defies the gleaner's sickle. It must, therefore, be taken more or less by surprise; and the skill of the gatherers is shown by the dexterity with which they introduce the point of a long knife and turn the fish over before it has time to exhaust the air between itself and the rock, and thus obtain, by the laws of atmospheric pressure, an adhesive power of about 230 pounds. As an article of food, the ormer is generally pronounced to be both wholesome and savoury. Two hundred years ago a gentleman of Sark, in a letter to a London kinsman, described it as 'a shell-fish much bigger than an oyster, and infinitely more pleasant to the gusto, so that an epicure would think his palate in Paradise if he might but always gourmandise on such delicious ambrosia.' A less appreciative partaker of it today would probably say that, fried or stewed, it makes an excellent dish, rather resembling a veal cutlet, with perhaps an added suspicion of brine. Before cooking, it requires to be beaten, or it will turn out violently tough; and it is generally served up with bacon. Being a univalve, with one side exposed to the air, the ormer will not keep; otherwise, in these days of oyster famines, it would certainly have formed, all over England, a welcome addition to our supper-tables.

An interesting relic recently added to the growing collection of curios to be seen in the bar of the Captain's Hotel, St Martin's, Guernsey, is an ormer beater. This massive hammer, shaped like a large gavel, was formerly used for beating those shellfish to ensure tenderness, and possesses an unique feature in a flexible knife concealed in the handle and used for extracting the ormer from its shell. Probably the last of its kind, this implement was presented to the proprietor, Mr Freddie Luto, by an old fisherman in whose family it had been a heirloom for many generations. [Basil C De Guérin, from Cuttings Book M.]

Ormers are a rich fish, and they have to be cooked properly. First you have to take them out of the shell. Don’t throw the shell away because it is very nice mother of pearl. Lay the ormers on a board and beat them well. This must be done with a wooden mallet so that they are not beaten to pieces. Put half a dozen ormers in a frying pan, let them simmer in their own juice for five minutes. Then add two tablespoons of lard, salt and pepper to taste. Turn them—they must be a nice brown on both sides. Then stir in a dessertspoon of plain flour with a breakfastcup of water, mix well and smoothly, and let them simmer for ten minutes.

[From a transcript of a BBC radio interview with Sarkees.]