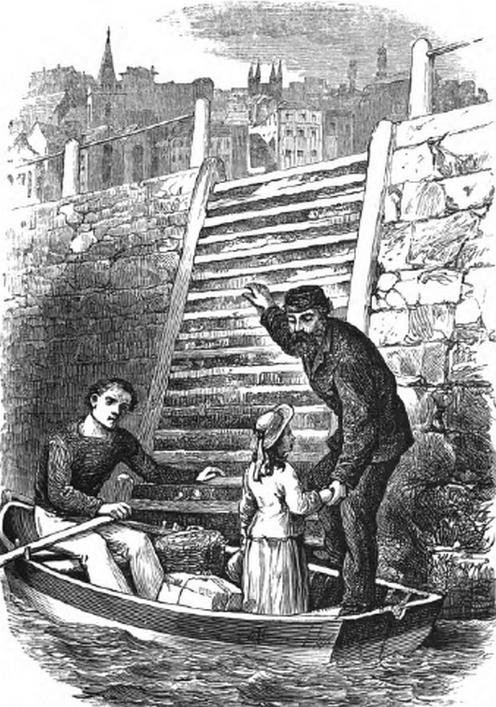 By D De La Rue, from the Guernsey Free Churchman, December, 1926, pp. 82-3. 'A few months ago the Editor was conversing with one of the octogenarians of our town and island, on the White Rock. The conversation revolved around the many changes that had taken place in the Harbour and its surroundings.' The illustration is taken from a local novel in the Library's collection, Mrs Carey Brock's moral but entertaining tale, Clear shining after rain, published in 1871.

The old order; When the tide stopped work; A once-thriving industry; Houses built on the rock; The value of quarry rubbish.

The foundation stone of the present harbour was laid on the 14th day of August, 1853 on what was then the beach. This stone can easily be recognised from the slipway near the slaughter-house, at low water, from the fact that it is the only finely-dressed stone in the wall. The beach at that time extended from the present Havelet to the inner pier, and the high tides came right up to the houses and lapped the shore all about the neighbourhood of Coupée Lane, the only remaining house (as it was then) being the tavern at this point.

The building of the walls commenced near Havelet and proceeded northward, and seaward towards Castle Cornet. The material for the fine road running from the bathing places was obtained by demolishing the cliff which sloped down to the rocks between Havelet and Clarence battery, so that we now have the upper and lower roadway and the States Gardens that have been recently improved.

When the tide stopped work

The old harbour, as it is now called, was very different from what it is now. Then it had an upper promenade of white flagged stone, and was a favourite promenade for retired mariners. The shipping berth was below and was covered at high water, so that loading and unloading were made impossible. When Queen Victoria visited our island in 1846, the landing and the departure took place at this lower berth, a picture of which may be seen in the vestibule of the Guille-Allès Library. This inconvenient arrangement remained for many years after the Queen's visit.

The Coal Quay was once very much narrower than it is now, and when the widening took place Cow Lane was closed. Through this lane imported cattle were driven, The remains of this lane may be seen from Church Square, looking towards the Quay.

At the north end of the Coal Quay, where the Crown Hotel now stands (the hotel then went by the name of Renier's Hotel). there was a slip-way down to the beach, and where the States Offices now stand, the writer has seen a schooner driven ashore during a severe gale. The present road, known as the White Rock, covers a pathway to the shore, and at very low tide the passengers were landed on a 'white' rock, in the neighbourhood of our present No 1 berth, which gave its name to the new landing.

The harbour, or pool, was then the roadstead where vessels sought shelter, and steamers proceeding to and from Jersey passed between the Castle and the island.

The Esplanade has not altered much. At the bottom of what is now called St Julian's Avenue stood Mr M de Putron's shipyard. But there was no avenue in those days; the road from the shore ran up the Truchot and the Vauxlaurens. This shipyard was one of five, four of which were situated between the White Rock and the Hougue à la Perre battery. It is interesting to note that in those days, on account of the level nature of the shipyard, the only method of launching was by means of wooden rollers, the ship being held back by huge blocks attached by strong tackle. The coming of iron ships and the use of steam as a means of locomotion gradually made the ship-building industry an economic impossibility in our island. The last ship to be built here was called the Gleaner.

Houses built on the rock

At the Salerie there were four houses built so close to the sea that their foundations rested on the rocks of the shore, and there were houses on the sea-shore up to Paris Street. The name of Salter Street still remains though the houses on the seaward side have been demolished.

Near Mr Robilliard's house the road narrowed to the Piette and was scarce wider than the present footpath, and the yard belonging to Messrs Dredge and Co. was Mr C de la Mare's shipyard, where the schooner Gleaner mentioned above, was built. Opposite Mr Winterflood's place of business there were four houses up to the slipway.

The Longstore is so called from the fact that there used to be a large store there in which the field-pieces belonging to the Guernsey Artillery were housed, and within living memory, the fort at Hougue à la Perre was used for gun-practice, the artillery being under the command of the late Colonel Giffard, the father of our late respected Bailiff, Sir H Giffard. It is interesting to note that the recent widening of the road at the Longstore is the third within our own memory.

The guns used by the artillery were 32-pounder, muzzle loaders. Black gunpowder was used. The range was about 500 to 600 yards, and their targets were the rocks.

The value of quarry rubbish

The above-mentioned fort was dismantled, the Martello tower demolished and the land levelled in preparation for the 'change-over' from steam to electric power by the Railway Co.

The tipping of quarry rubbish has had the effect of widening the road and making possible a pleasant promenade along the shore of Belle Grève Bay in the direction of Bulwer Avenue, as the new road through the furze-brake at Richmond Corner, is called. The whole of the land on which the petrol stores are built is 'made land' and covers what was once the beach. The remains of the original wall can still be seen, near the tram rails.