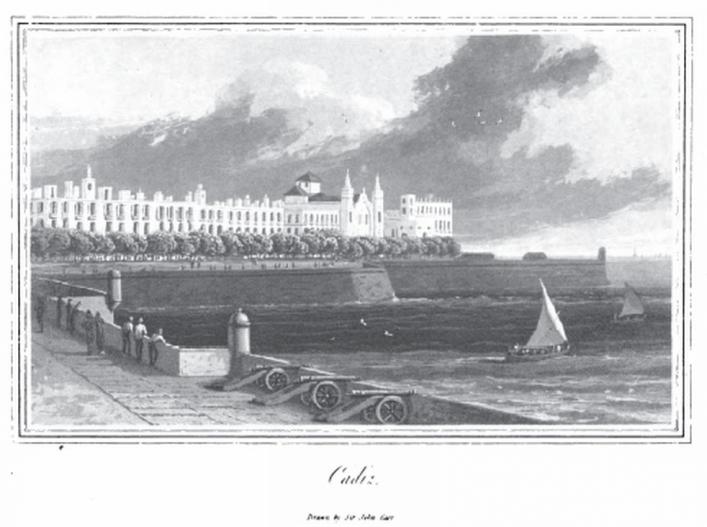 Cadiz August 27 Circulate this with souvenirs.

Ten days ago we anchored here after a most pleasant navigation of 17 days in the Asia Spanish 64. The officers and passengers (30 or 40 in number, of which about 20, including Tupper,1 his nephew, and myself, messed with the Captain) did everything in their power to make the voyage pleasant. I do not know where we have got our English ideas of the dull gravity of Spaniards; nothing can be more diametrically opposite to the truth. Our small table I believe made so much noise, and afforded much more fun in one day than Trinity Combination in a whole year. One Sunday afternoon especially, when a queer little improvisatore in bad Spanish made himself and us half drunk with wine worthy of his doggerel Muse, we licked up such a row and played such mad pranks as I shall not attempt to describe for your northern imagination. I wish by the bye these same Dons could box the compass as well as the bottle; on the night before the bout I have been speaking of, August 10 at midnight, they were within an ace of running right upon the Berlingues, a ridge of rocks on the Portuguese coast, which they mistook for a sail, being 10 or 20 leagues out in their reckoning. Before I quit the subject, must not forget to do justice to our commons, which beat the Vice-master’s Sunday dinners all to pieces. Always 3, generally 4, courses, all fresh meat, poultry, and sometimes fish, and regularly by way of finale, a roast joint, and excellent cold puddings or rather custards, for which, and other purposes, we had two milch cows on board, besides other livestock in calves, sheep, pigs, and poultry, without end.

Now for Cadiz. It is without exception, or scarcely comparison, the prettiest, neatest, and cleanest place I ever saw. The houses are high and the streets narrow; but in this climate this is necessary. Few of the streets have causeways; but rows of flagstones, broad enough for one person to walk upon, are set in the paving, which seems firm and close, but is very rough. The houses are stone or plaster. Most of them washed white all over, and the rest of a very pleasant brown. Almost every one has 2 or 3 balconies, and iron gratings to the windows. All these are green. Such is the extreme prettiness of the whole, that it looks like a filigree or plaster of Paris model rather than a real town. The women must be most charming creatures for close acquaintance; fine black eyes flashing fire through the open front of the mantilla, every word perfect music, every gesture graceful; and an attitude and a gait that would make a she-devil lovely. To these add the seduction of a conversation, animated and free, and yet well covered, and then just try to guess the force of all this unified fascination. By the bye, I passed Sunday evening at a dance given by a female professor of the art of pleasing, in honour of her birthday. Waltz, bolero, fandango, zapateado in fine style in all as decent as possible, but not the less moving on that account. But I must leave soon for politics.

Part first of the new constitution is just come out. From what I can understand it beats ours by a noble spirit of liberty and dignity in referring everything at once to the sovereignty of the Nation, and by having no House of Lords. The Council of State also is chosen from persons nominated by the Cortes. But you will have all this published.

There are great dissensions in the Government with which the people is by no means satisfied: and since the battle of Barrosa, there has been a great deal of coolness between the Spaniards and us. Pena does not seem so much to blame as was thought. It seems that Graham, having put himself under Pena’s command, and received orders to wait in a wood, moved out of the wood to give battle, without orders, and without first acquainting Pena, whose plans were consequently frustrated, and who in fact could not have come up in ¾ hour, the time in which according to Graham, the affair was decided. As I cannot read Pena’s account I write on hearsay; but I believe I am correct. From the multitude of public papers, and from the spirit of the advertisements everywhere stuck up, I augur well of the public mind. One thing struck me: the question formally discussed in print whether the Holy Office was useful or prejudicial is another thing. I hear the Cortes are going to call a council of Bishops, as the Pope is now in the power of Bonaparte and therefore his decrees are Bonaparte’s decrees.

The Minister of war lately proposed 29 reforms re Guerillas, which went to cut up the whole system. The 29 were unanimously rejected by the Cortes, with an expression of surprise at such propositions, which they considered as emanating from the French Govt. The Government had systematically discountenanced the Guerillas, as it was natural for the military who have most of the power, to be jealous of men whose successes set in a stronger light the inefficiency of the regulars. The Cortes, and public, however, are strongly for the Guerillas; and after this severe lesson for the war minister (who most unaccountably keeps his place) it is fully expected that the Government will change its conduct. Generals Soult and Friere had a small brush the other day between Murcia and Valencia; the Spaniards kept their ground. As for Valencia, it is quite safe; being under command of the invincible Captain General, Nuestra Senora de los Desemparados [Our Lady of the Forsaken, patron saint of Valencia], who was duly elected the other day. Fact, I assure you I had forgotten the climate, which has not incommoded me except the first day. It is exactly what you would like. On Thursday or Friday we are off for Gibraltar and Valencia with all our stores, under convoy. Our vessels will make a little fleet of themselves.

For a transcription of more of the Priaulx's collection of these letters, given to Osmond Priaulx for the Library by Pryme's son in 1883, see C. R. Fay, Peter Paul Dobrée of Guernsey and Cambridge, Quarterly Review of the Guernsey Society, XII (3), Autumn 1956.

¹ For the activities of the Peter Carey Tupper in Spain during the Napoleonic Wars, particularly the humanitarian intervention he made with the Spanish junta in Valencia in 1808 to prevent further massacre of French civilian prisoners, for which he received the title of Baron Socorro [Socorro meaning 'aid'] from the Spanish government, see Chapter XIII of Sir John Carr's Descriptive travels in the southern and eastern parts of Spain and the Balearic isles, in the year 1809, London: 1811. The illustration of Cadiz at the head of this article is taken from this book. Peter Paul Dobrée has a monument in Trinity College, Cambridge. His friend George Pryme wrote him an affectionate obituary included in his autobiography.