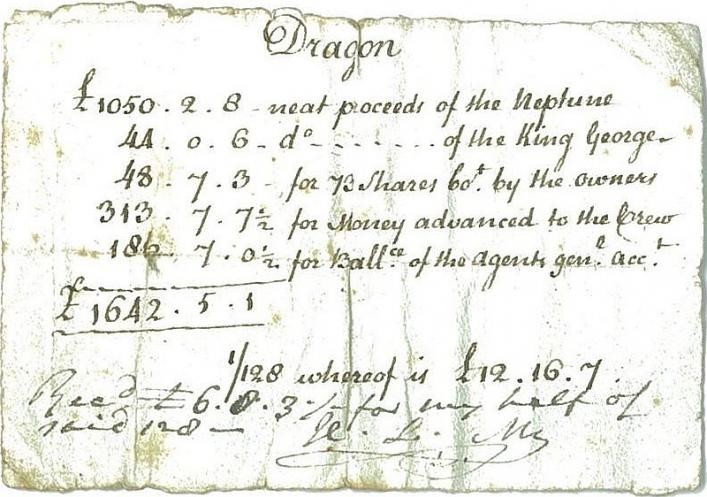 Privateering action in the 18th century.

For more on this see 'Some notes on 18th century local shipping', from Report and transactions of the Société Guernesiaise, XVI (3), 1957, pp. 268 ff., based on the Library's Manuscript records of Isaac Dobree, notary public, relating to shipping, 1745-1790; and 'Guernsey Letters of Marque.' An interesting introductory pamphlet, Letters of Marque, declarations against America 1777-1783, 1980, by Walter Michinton, presents an analysis of the Channel Island privateers during that period. In 1777, the Privateering Act awarded captors of an enemy vessel the whole prize; the Crown no longer took a share. Guernsey and Jersey were the fourth and fifth most important ports for privateering respectively, London being pre-eminent. Bristol sent out 215 ships during this period, and Guernsey and Jersey 214, being a 9.4% share; their average tonnage was 106, and they stayed out on a cruise for around 5 months on average.

June 10. A Prize laden with Wine, bound to Bordeaux, taken by the Greyhound Privateer, Capt. Pitton, and carried into Guernsey. 15 June. A 200 Ton Vessel for Guernsey, from Lisbon, taken off the Lizard by a French privateer; who took out all her hands but 4, and put 13 Frenchmen on board, who, in carrying their Prize to Ushant, drove on the islands of Lundy, where the Englishmen, seeing several fishing Boats made a Signal, upon which they immediately boarded the Vessel, and brought her safe into Ilfordcombe. 3 July. A ship with 155 Butts of Wine, from the Canaries for Dunkirk, taken by a Guernsey Privateer, but re-taken by a Bourdeaux Privateer, and carried into a Port iin Galicia. 4 Aug. The Patience, Brieul, from Newfoundland, with Fish for France, taken by the Greyhound Privateer, Capt. Pitton, and the Guernsey ditto, Captain Lambert, and carried into Guernsey.

A French snow from Cape Breton, laden with Fish, taken by a Jersey privateer and carried into Guernsey. (p. 648). It was reported, that by the storm on the 20th, two French men-o'-war were split on the rocks of Guernsey, and two got in there, one without its Head, and the other had lost its Masts.

June. A Martinico ship, 200 Tons, 14 Guns, and 44 men, taken by the Adventure privateer of Guernsey. A French brigantine, from Bordeaux to Quebec, richly laden, taken by the Success and Squirrel privateers of Guernsey; two more prizes sent in to Jersey by the Success; 11 prizes taken at one time by a Guernsey privateer, which he was obliged to ransom. Three small French coasters, taken by the Mary galley of Guernsey. The Society, Major, from Guernsey for Madeira and Barbadoes, carried into Brest. The Susanna, of 150 Tons, from Martinico, with Sugar, Coffee, and Cotton, brought into Falmouth, by the Adventure privateer of Guernsey.

The Gentleman's and London Magazine, 1756.

From Miscellaneous Correspondence of the 18th Century.

April 1757: the Alderney Privateer is taken, and carried into France.

June 1757: the Middleton privateer has retaken a ship, and carreid her into Guernsey.

July 1757: the Amazon privateer of Guernsey, is carried into Morlaix.

September 1757: the Six Frères, and the Muette, and one other, from Bordeaux to Martinico, by the Fame privateer of Guernsey and the Twibot privateer of Liverpool.

October 1757: the Escorbouele, a Frigate of 16 Guns, sent out as a Spy, by the Isis, and carried into Guernsey.

January 1758: the Reprizal, a French privateer of four Nine Pounders, by the How privateer of Guernsey, and retaken a Vessel from Dundee for South Carolina.

March 1758: the George, Blissen, from Guernsey to Southampton, is taken by a French privateer.

May 1758: the Free Mason privateer, of Guernsey, by a French frigate, and carried into St Martins, in the Bay.

June 1758: the Endeavour, Mathews, of Guernsey, by a Lug-sail privateer. The Mary, Wally, from Virginia to London, by the Machault privateer of Guernsey, and ransomed for £5000 [about £500,000 nowadays].

July 1758: the Joseph, from Bordeaux, laden with wine, brandy &c., by the Surprize privateer of Guernsey. The Nostra Seignora Del Pillar, Pedro Ponts, by a Guernsey privateer. Two French Prizes, loaded with Ammunition, sent into Guernsey by the Revenge privateer.

The Kirke privateer of Guernsey, taken by the Samson privater of Bayonne.

September 1758: two Dutch Ships with Sugar &c., and sent into Guernsey by a Guernsey privateer.

November 1758: New York, Nov. 6th. A large French Prize Ship is arrived here, called the Molly, is bound for Quebec from the Cape, loaded with Fish, Oil, Planks, &c. She was taken off the Cape the 19th September last, by the Royal Hester Privateer of this Port. She formerly belonged to the English, and was a Privateer called the Nancy, out of Guernsey, mounting 18 nine-pounders, and proved very succesful out of that Place, having taken, it is said, near an Hundred French Vessels, before she was taken by the French; two of whose Frigates carried her into Morlaix, from thence she was sent to Canada, and now had but two guns mounted. Four English prisoners were taken on board her, designed to be exchanged at St Domingo.

A Dutch ship, M. Kauw Master, is taken by a Guernsey Privateer, and carried into that Island.

Owen's Weekly Chronicle, May 1759: The importance of the Guernsey and Jersey privateers to this nation is such, that within these two months, three small ones, of two guns each, and from 15 to 20 men, have carried into these islands 12 prizes, to the value of £10,000, all of which prizes were French coasters, laden for the navy at Brest, and bound there with different kinds of stores and provisions, which considerably retard their armaments; and as there are now 15 privateers from those islands cruising in the Bay, it is to be hoped they will have the same success, as they are all rigged like the French Chasse-Marées, which are the only vessels now employed in the French coasting trade.

The Elizabeth, Richards, from Guernsey to Lisbon, is retaken by a Guernsey privateer and carried into Scilly.

The Prosperous, Grut, from Guernsey to Rotterdam, was taken the 12th ult. near Middleburgh, by two French privateers, and carried into Dunkirk.

The Drake, from St Domingo, is taken by the Bellona privateer, and carried into Guernsey.