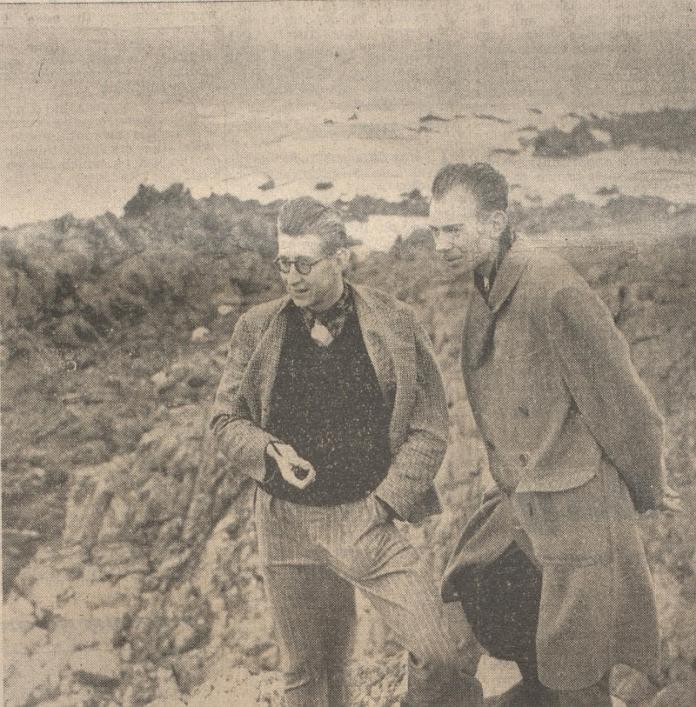 'Aircraft wreckage used for fire to keep out cold.' From the Star.

One of Lihou island's new owners went to to look over his small possession yesterday—and was marooned until late last night.

He was giving the island a final assessment before deciding on its future: at the end of the day's adventure he told me: 'I want to develop the place.'

The man is Mr Henry F Hudson, wartime bomber pilot and until recently on the secretariat of the United Nations Organisation in America. He and a friend burned the wreckage of a German aircraft to keep themselves warm while waiting for the tide to go down again.

Mr Hudson set off for Lihou Island early yesterday, accompanied by Mr Geoffrey Martin, an ex-army friend. They spent the day looking over the 38-acre property, and were so interested that they became marooned when the tide rose and covered Lihou Causeway.

'We had asked our taxi driver to arrange with a fisherman to take us off if we should become cut off,' Mr Hudson said. 'But apparently it was too rough for a small boat.'

'Darkness came, and we were left without food; all we had was a packet of cigarettes and a lighter. As it began to get cold we burned the wreckage of a crashed German aircraft and erected a shelter with sheets of old corrugated iron which we found nearby. We kept warm until about 10 p.m. when the tide had gone down sufficiently to allow us to walk back to Guernsey.'

'It was very dark, but I guess our navigation was bang on.'

'What do I think of Lihou? I think it is a beautiful place. I want to develop the island—I have the facilities to go ahead with my plans, but first I am going back to England to discuss them with my partner. I have had offers to sell the place, but would rather develop it.'