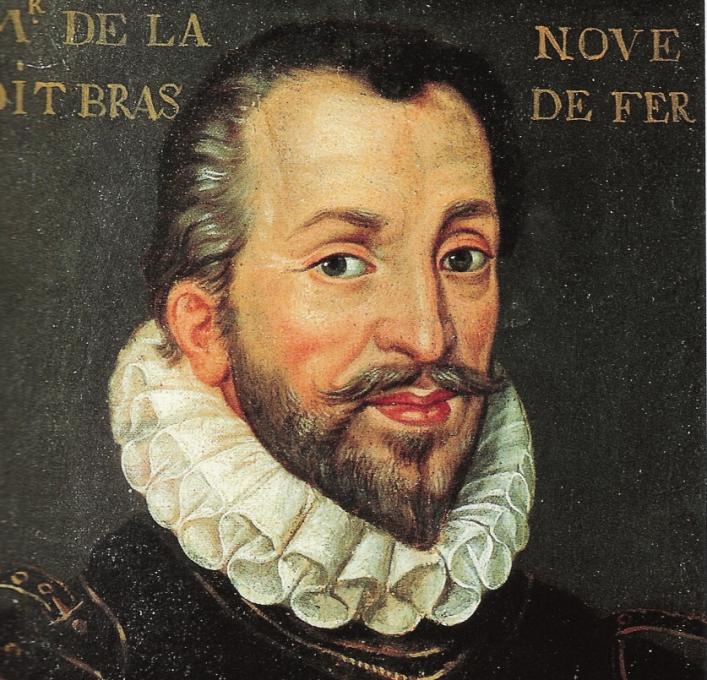 François de la Nouë (1531-1591) was a Huguenot hero. He was a nobleman who bore the nickname Bras-de-Fer, Iron-arm, because he had replaced his right arm, lost in battle, with a mechanical iron one. As second in command to Gaspard de Coligny and favoured by Henry IV, his biography would have been a recommended read in the steadfastly Protestant households of French-speaking Guernsey, which is probably how Thomas Lenfestey came by his copy.

La Nouë's sister, Marguerite-Claudine-Anne, married a wealthy nobleman from Anjou, with land and property in Brittany at Pordic and elsewhere. He was Jacques Le Porc1 de la Porte de Vezins, son of Jean Le Porc of Nantes. Jacques' great-grandmother had been a La Nouë, and her family had interests in Nantes. Unfortunately Jacques detested his wife. They had three children, a son René, born in 1560, and two daughters, Isabeau and Judith, but Marguerite de la Nouë was so unhappy she left her husband. Five years after her death in 1573 Jacques married another relative, a widow named Louise de Maillé de Lathan, with whom he was said to have had a long-standing affair. They produced two children, a son and a daughter. There was no love lost between Bras-de-Fer and his brother-in-law.

The various versions of the story differ as to what happened at this point, but Amirault's is the earliest, and he sets part of the action in Guernsey:

'As is proverbially the custom of step-mothers, the new lady of Vezins desired to rid herself of the children of the former marriage. Not content with the plans so commonly adapted by step-mothers of that day—who often had no other reason for so doing than the desire to gain absolute power over a government, the authority of which they fear will be disputed by the children in question, they either married them off at an early age, sent them away from home to travel in far off lands, or disposed of them by other such means—she carried her ideas still further wishing her own children, should there be any issue of the marriage, to be sole heirs of this rich, flourishing, and illustrious house. She adopted extreme measures and caused these three little children to be conveyed to Pordic, in lower Brittany, where they were temporarily lodged in a house, situated on the shore, which belonged to their father the lord of Vezins.

An opportunity occurring, they were placed in the hands of an English pilot, who had agreed to destroy them, at her instigation. He, touched with compassion, did not take their lives, but believing them to be too young to have any recollection of their former life and origin, landed them on the English coast, giving out that they were illegitimate, and imparting no information as to their parentage.

To lessen the chance of their identification, they were taken to the island of Guernsey, where, meanly clad, they were represented as children of no account, and as such were entrusted to a poor family who, for a small sum of money, took charge of them.

From time to time the step-mother gave out that first one, and then another, of these children had died at the father’s house in Pordic, where, to deepen the impression, mock funerals took place. The girls, however, did not altogether lose the recollection of their origin, but they having grown older and hearing the lord of La Nouë spoken of, it brought to their remembrance that he was their uncle and that they had thus heard him called in their house. They wrote and made themselves known to him, on which he, believing in their identity, did all that lay in his power to procure their return to France, even going do far as to obtain the influence of his friends at the French Court, who were able to obtain evidence placing their identity beyond doubt. The father, who is suppose to have connived at the plot carried out by the step-mother and her accomplice, at first refused to recognise these children as his, but at last he, yielding to his better nature, acknowledged them, and expressed himself willing that they should be brought up by their aunt, the lady of La Nouë, who was a most excellent and virtuous woman. She was, however, prevented from so doing, by various unexpected causes, and before an opportunity occurred of effecting their removal, the girls had both died.

The son, who had been removed from Guernsey and taken to London, while still very young, and who had had no communication with his sisters, almost lost the recollection of his birth and parentage. He was apprenticed to a shoemaker. As he grew older he could not dispossess himself of the idea that he had originally come from France and was the scion of a noble house. Having heard of the care which was taken of the two girls by La Nouë, he imagined that he might be their brother. Finding out that La Nouë was then in Flanders, he crossed over to introduce himself to him.'

La Nouë remained unconvinced of the validity of René's claim, but could do little to investigate as he was then held as a political prisoner for seven years. René, forced to deal with his stepmother alone, found his way to the Protestant centre of Geneva, where, coincidentally, his uncle, who after his release happened to travel to the same city, decided he needed new boots and visited his nephew's shop to order them.

La Nouë did not perceive that he had his professed nephew before him, for seven years had made a considerable difference in the appearance and stature of the young man, who now in a deliberate manner proceeded to fit on the boots, making La Nouë move about and altogether conducted himself with an assurance and bearing incompatible with the associations of his trade.

This caused La Nouë to regard him attentively, when he seemed to perceive in him certain peculiarities of manners, which he had oft noticed in the people of Brittany, and more especially in his brother-in-law, the lord of Vezins. So strong was this impression that he asked him who he was and from whence he came. The young man replied in a modest manner, that he did not know very clearly, but that he was the one who had the honour of seeing him, while in Flanders, and there told him that he was his nephew, the son of the lord of Vezins. The conviction that he was what he imagined him to be, suddenly came home to La Nouë.

Though there was very little external resemblance, there were such facts, as the move from Guernsey to London, his education there, the knowledge he had of the part of England, where the children were first taken, which the young man now thoroughly explained, and which he had not done at the first interview, perfectly satisfied La Nouë that this was veritably the heir of the illustrious house of Vezins. He felt that he could not leave him there without doing him an injustice.'

La Nouë had recovered his sister Marguerite's fortune from her widower and was now in possession of it, but despite knowing that he would have to give it up to René, high-minded Protestant hero that he was, he did everything he could to help him regain his birthright. René's father, of course, refused to acknowledge him. Upon Jacques' death in 1587 his son Jean by his second marriage inherited his father's titles and wealth.

La Nouë began a court case to establish René's true identity but died before he could bring it to an end; his son Odet took it up on on his behalf. René's half-brother Jean tried to persuade Odet de la Nouë to abandon the case,

even going so far as to tempt his wife, who was at Paris at the time, promising her as much as 20,000 crowns, with land worth a rental of 6,000 livres. His lady was strongly tempted by this offer and begged him to consider the matter carefully, for supposing this young man to be an imposter, they would be doing a great injustice in depriving themselves of so much property which was legitimately acquired, to those arguments he sarcastically replied, And did you, my love, doubt that he is what he professed to be? Do you not see that he resembles his father and had the same peculiarity?

Nothing discouraged this young lord de la Nouë, who finally succeeded in restoring his cousin to his rightful property which is enjoyed by his descendants to this day.

René de la Porte de Vezins finally became possessed of his birthright on 5 August 1600, following fifteen years of very expensive court proceedings. The previous year he had married Anne de Maillé de la Tour-Landry; his own seat of Vezins had for the last thirty years been commandeered as a Huguenot refuge, so they settled at the Château de La Tour-Landry. René was now Baron of Vezins and Pordic, Lord of Archapt, Villeneuve, Le Plessis and Casson, and Noue-Briord, which title later became elevated to Marquis. He died in 1616, when his widow was granted the title of Countess; she and their eldest son François bought back and restored the Château of Vezins. René's sisters Judith and Isabeau did not remain in Guernsey, if they were ever here, as eventually both married in France. Francois de la Nouë's son Odet was a renowned Huguenot captain himself. Ten years younger than his cousin René de Vezins, he died soon after, in 1618. Odet was also a poet and one of his works is in the Library: 'The profit of imprisonment. A paradox, written in French by Odet de la Noue, Lord of Teligni, being prisoner in the Castle of Tourney,' in Du Bartas, his Divine weekes and Works, translated and written by Josiah Sylvester, printed in 1641. For more on this family, including Jacques Le Porc de la Porte de Vezins' notorious brother, Claude, see Baudry, J., 'Saint-Mars-la-Jaille at ses anciens seigneurs,' in Revue de Bretagne, 25 (1909), pp. 313 ff., a copy of which is in the Library.

1 There was coincidentally a Le Porc family resident in Jersey at this time, and the name occurs in old Guernsey documents. A Judith Le Porc, who would potentially be the right age to be René's sister, was admitted to communion in the Walloon Church of Southampton in April 1587 (Registre de L'Eglise Wallonne de Southampton ... 1890, Library Collection, p. 20); she is, however, only one of several people of that name to feature in the registers, while the Judith of the story is supposed to have married the oddly-named Huger de la Mancellière in Normandy.