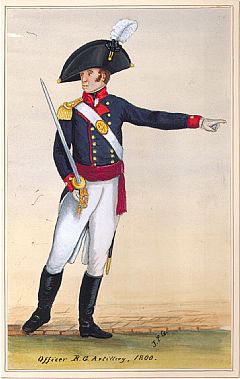 John Percy Groves was the first Librarian of the Priaulx Library. He started his army career with the 67th South Hampshire Regiment of Foot, and ended it in 1873 with a year in the 27th Inniskillings, at which point he sold his commission and retired to Guernsey. He was the nephew of Osmond de Beauvoir Priaulx1 and had already begun his writing career when he received his appointment as Librarian. He and his family had a large apartment in Candie House, newly enlarged to house the many thousands of books that Osmond Priaulx had gifted to the Library, but Groves was nevertheless criticised for appropriating some of the rooms intended for the public—perhaps on account of his seven children. His wife is pictured below in front of the Library. 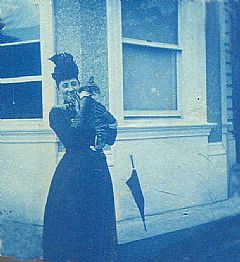 How good a Librarian he was we do not know; in his short biography of J. Percy Groves,2 Dr. H. Tomlinson reveals that the minutes of the meetings of the Trustees show him to have been often absent from the island. At this period he was collating his important set of regimental histories which he may well have had to research on the mainland. As well as these well-known works, Captain J. Percy Groves, as he was then known, produced several adventure stories and colourful depictions of life in the services, often with a historical setting, and in all he seems to have had a successful career as an author. Many of his works, including the regimental histories, are in the Library. The famous 'Boy’s Own' author E. A. Henty used his short stories in his magazines and even called one of his characters after him.

From a local point of view, however, his most important contribution was his two-volume work, The Royal Guernsey Militia, A Brief Sketch of Its Services, &c., From 800 to 1893. It was published in Guernsey in 1895, at which point he was styled Lieutenant-Colonel (of the Royal Guernsey Artillery). He had access to the books and ledgers of the Militia that are now held at the Priaulx Library, and personal experience of its history. Often said to be one of the oldest military organizations in the world, his knowledge and grasp of its earliest years from the ninth century onwards are (understandably) somewhat vague and credulous, but he is able to quote ordinances relating to its governance from 1549; the male inhabitants of the island are commanded to obey their captains, and

the captains of the several companies are strictly enjoined to see that 'the haquebuttes, ars et trousses are in good and serviceable order, that the boulvars are constructed, and that the munitions are always ready, as they shall answer.'

The militia, with the exception of the musicians, never received payment until the beginning of the twentieth century. Attendance was, however, compulsory; the fear of a French invasion always present to varying degrees. Unless a militiaman gained exemption (and friends of officers and officers themselves seem to have had quite a few, to the resentment of everyone else³) he was obliged to come out for review, practice, or watch duty. If he was unable to do so he had to send someone else in his stead. 'Strangers,' or non-locals, were not usually allowed to serve although they were in practice paid to take others’ place; for watch duty during the night in times of political stress in particular, a female member of the family had to stand in for a incapacitated male or pay what was a great deal of money for someone else to do so.3 Louisa Lane Clarke tells in her book on Alderney4 how the French were put off attacking the island by the sight of a mass of red coats in the watch post, which turned out to have been worn by women.

J. Percy Groves explains how the difficult relationship between the militia and the British garrison developed over many years. There were times of great stress in their dealings with each other, in the 16th and 17th centuries, when the tiny garrison was at first commanded by a Captain from England who fulfilled the duties that later devolved to the Governor; and in the early 19th, when, as the garrison was expanded, tension rose. He tells us that in 1607 the islanders forced an inquiry by the Royal Commissioners into the extortionate behaviour of the acting Lieutenant-Governor, Peter Carey, who levied a great deal of money from the islanders purportedly to pay for weapons for the militia that never materialised. The islanders did not get their money back, and this was not the only complaint of its type in the history of the militia. The first Colonel of the Militia was Charles Andros (1662-1718).5 In 1719 the militia took over guard duties at Castle Cornet. Officers had to provide their own uniform and arms, poorer soldiers were supplied them.

An Ordinance of the Chief Pleas in 1730 is the first to mention the militia as having been divided into regiments. These were based on locality of residence, and the rank of regimental Colonel was established along with that of Lieutenant-Colonel. From 1799 the British authorities supplied officers from the Garrison to act as 'Field Inspector' (abolished 1818) and later 'Adjutants,' the antics of whom occasionally led to resentment, and actually to mutiny in 1899.

During the French Revolution and Napoleonic Wars the militia were regarded by the British Government as first line of defence against the expected French invasion and were constantly exercising and called out for guard and watch duties6. Many found this a great hardship as they were thus unable to work for their livelihoods. There was also trouble with the garrison regiments who were stationed in the island. The situation was exacerbated by the fact that no non-British regiment was allowed to reside on the British mainland and consequently ended up in Guernsey or one of the other islands; Russians, Dutch, and 'Black Brunswickers,' as well as the royalist French companies (which were notoriously chaotic, with none of the refugee nobles wanting to serve under another). The foreign soldiers were for some time billeted on the locals until extra barracks were built, and a great deal of time and effort was spent by the authorities trying to keep control of violent and rebellious elements amongst them. In 1845 Militiamen were exempted from active duty, in time of peace, at the age of 45.

Groves’ second chapter is dedicated to the history of the Royal Guernsey Artillery from the year of its foundation, 1755. He deals with the Cavalry Corps in his third chapter, and discusses the general and regimental staff in the fourth. The fifth chapter is particularly interesting, the infantry militia being most often involved in controversy and change. 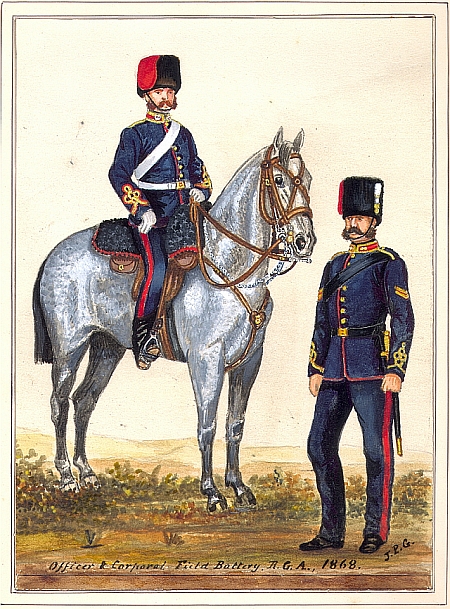 J. Percy Groves was particularly knowledgeable about the uniforms of the militia, which changed often, and the second volume of his work is dedicated to illustrations of some of the historical costume of the various regiments. The infantry regiments were colloquially known by the colour of the facings on their jackets; Green (North), Black (West), or Blue (South). The North was disbanded after the mutiny of 1899. The Town regiment wore buff facings but had no nickname.

The second volume exists in only one copy, as it consists of the watercolours bound in the identical cover to Vol. 1., and is as yet unpublished. Groves' illustrations were used as the basis of a very popular set of postage stamps issued by the Guernsey Post Office in 1974. The Militia Museum in Castle Cornet has an extensive collection of these uniforms. [DAB]

¹ According to census records, J Percy Groves was born in Bath in 1850, second son of John Richard Groves (1803-1859) of the Rifle Brigade and Essex militia, who was the Governor of Millbank Prison until he was appointed the first Queen's Equerry in 1856. W A Lindsay, The Royal Household 1837-1897, tells us that John Richard was the son of John Thomas Groves, R.A., of Chelsea Park, and Jane Chapman, daughter of Colonel (afterwards Lieut. Gen.) Richard Chapman, R.A. The Guernsey connection comes from his mother, Elizabeth 'Lizzie' Louisa Priaulx, who was daughter of Anthony Priaulx, and sister of Osmond de Beauvoir Priaulx. Anthony Priaulx was married to Martha Gore, daughter of Anthony Gore of Donegal, and neice of Ralph Gore, 7th Bart., at Dagenham in 1837. For more on the relationship between the Irish Gores and Guernsey families, which began when Richard Gore, son of the 4th Bart., married Martha Fiott, see De Havilland, T. F., Genealogical Sketches etc., Guernsey, Barbet, n.d., pp. 11-12.

In 1873 J. Percy was married to Harriet Augusta Raines, the only daughter of Col. Joseph Robert Raines, and sister of the highly decorated Gen. Sir Julius Augustus Raines, K.C.B., Colonel of the Buffs. She was born in Stroud, in Kent; the Groves family also had strong links to that county. At least two of their sons went on to assume the name Groves Raines. J. Percy Groves resigned as Librarian in 1910 and died in 1918. He had married again. As well as Groves' books about military and regimental history, he wrote c. 1980/1 for the Graphic about "Military Types".

³ See for example letters of complaint in French to Sir Thomas Saumarez, Brigade Major in charge of the militia, 1799, Priaulx Library collection.

4 Clarke, Louisa Lane, The island of Alderney: its early history, antiquities, present state, scenery, customs, and trade: being a companion and guide for the traveller, Guernsey, Brouard, 1851.

6 Durand, Ralph, General Militia Orders during the latter part of the French Revolutionary Wars and the Napoleonic Campaigns, Transactions of the Société Guernesiaise, 1935. See also the Gazette de L'Isle de Guernesey for the period, passim.

Amongst many other items of militia interest in the Library:

An outline of the history of the Royal Guernsey Militia, by Basil C. de Guérin.

The Channel Islands militia: its present constitution considered, with criticisms on the government plan of reform; and a counter-proposition for its re-organisation, by a Guernsey militia officer, Guernsey, 1989,Facsimile of original edition, published in Guernsey by Thomas M. Bichard, 1874.

Amendments of the Regulations for the Channel Islands Militia 1890, London: HMSO, 1891.

Regulations (provisional) for the Royal Guernsey and Royal Alderney Militia: to which are appended the militia laws relating to the islands of Guernsey and Alderney, London : H.M.S.O., [n.d.]

Dress regulation for the officers of the army (including the militia), 1900, War Office, 1st Ed. reprinted London, Arms and Armour Press, 1980.