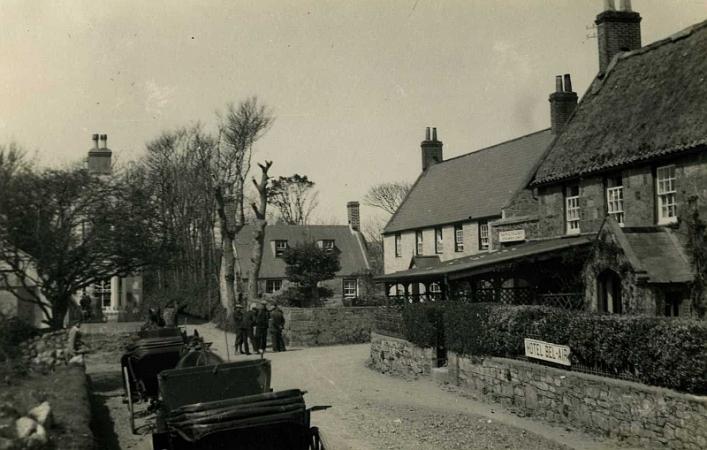 This description of a holiday in Sark was written by a well known Methodist minister, Reverend Nehemiah Curnock, for the Methodist Recorder, of which he was the editor. It was reprinted in the Star in December, 1890. Curnock was taking photographs with a 'Kodak instantaneous' camera; he was in the forefront of technology, for Eastman had only patented it in September, 1889. The box camera took a 100-exposure film; the whole camera could be returned to the company for the photographs to be developed, or equipment could be bought to develop the pictures at home without a darkroom. The photograph is from the Library Colletion and shows La Collinette in 1936.

The Church bell rings. It must be nearing six o’clock, when the French service will be held. How sweetly the bell sounds! It has an echoing resonance such as you seldom hear in any single bell. ..... Once the metal gave forth sounds of murderous import. More than three centuries ago, Queen Elizabeth gave two brass culverins to Helier de Carteret, the first Seigneur of Sark, along with a charter which secured to him and his heirs feudal rights of lordship. Whether the guns were ever used for the death and destruction of the Seigneur’s enemies, I do not know. But in recent times the vicar, being a man of peace, craved permission to cast one of them in to a bell, and now it calls the fisher-folk and farmers to prayer.

Mr Cachemaille,1 the last vicar, for years never left the island. He had a horror of the sea. Once the Seigneur, for whom Cachemaille had a great regard, insisted on steering the boat which was to convey him to Guernsey. The vicar, having seen his friend embark, crossed to one of the heights from which he could watch the boat as it passed. The boat was caught in a swirling tidal race and overset. The Seigneur was drowned, and Mr Cachemaille, who saw the accident from afar, could never be persuaded to trust himself to the treacherous waters again.2 His son, alas, many years later, was drowned at sea. A marble slab in the Church preserves the young man’s name, and another by its side bears the record of his father’s island fame.

The parson was a good man, greatly respected in his parish, and known elsewhere for the tracts he wrote—tracts on the millennium, of which he loved to dream. One of his cherished beliefs was that when the millennium came, it would be possible to reach the new Jerusalem by land. 'The sea'—the cruel, treacherous, angry sea—would 'be no more.' ..... This afternoon Mr Cranswick and I crossed the little wooded dell below the Dixcart and went to the church where Mr Hume conducted an English service—the only English service of the day. Mr Hume is a visitor. He comes every year and acts as English curate. The service was quite simple, and the sermon refreshingly earnest.

Mr Hume and Mr Mellon have written a model sixpenny guide.3 By its help you can find your way without difficulty to every point of interest in the island. There is not a lane, or field path, or gate, or stile, or bay, or cave which these amateur guides have omitted, and all the information is absolutely accurate.

This morning we went to the Wesleyan Chapel at La Ville and heard Mr Collas, one of the Guernsey local preachers, conduct a service in French. For fifty years Mr Collas has been coming to the island. He is nearly eighty years of age. The singing was sweetly plaintive, and the sermon, so far we could follow it, was a lovely little homily on Psalm lxxxiv. As we walked with the old man to La Collinette [see picture above], where he lodged, he suggested that we should go to the English service at church in the afternoon, which he himself attended—in old Methodist style. Arrangements should be made for a Wesleyan service in the morning. It need not clash with the service at church, which is much too good to meddle with.

Serk at times is famous for birds. In the spring the larks—which the people do not kill—fill the air with their songs. Blackbirds also abound. My Irish friend saw a pair of jays in the Dixcart grounds. One afternoon on the outlying rocks of Little Serk I saw gulls, cormorants, oyster-catchers with their red beaks, sealarks, and a curlew—all together.4 ......

The most curious rock-pool I have ever seen Peter showed me near the labyrinth of islets where we found the birds. You can get at it quite easily by land, if you do not mind crossing the Coupée and climbing down. But the better way is to go in a small boat at low tide. You round a corner in Clouet Bay, clamber over the weed-covered rocks and suddenly you come on a large, roughly circular pool, known on the island as 'Venus’ Bath.' It is filled afresh at each high tide. As there is no clay or mud or chalk anywhere near, but only rock and weed and pure surf, the water is always clear. The depth is fifteen feet. The sides of the bath are lined with the loveliest corallines, weeds, sponges, and zoophytes. The colours of the metamorphic rocks are simply gorgeous. To the left of the larger pool is a tiny pool nearly circular. This also is deep and exquisitely fringed. It is fittingly called 'Cupid’s Bath.' ....

When you come to the La Creux Harbour, you wonder how the steamer is to get in; and when that preliminary difficulty is settled, you wonder, as Her Majesty’s First Lord of the Admiralty is said to have done, how you are to get out, save through the narrow waterway by which you entered. For the harbour, like the island, is rock-locked. And it enjoys uniqueness in another respect. There is no house or hut, or shed even, anywhere near it. There are boats, lobster-pots, fish-baskets, and one or two or three primitive carriages and carts. And there is a crane, a sort of magnified mechanical toy by which your chattels are hoisted from a steamer to the quay.

You land, and having some doubt as to the island’s capacity to house so important a personage, you feverishly ask the nearest way to the hotel, not knowing that there is only one possible way (unless you wish to scale a young mountain), and forthwith find yourself in front of a rock-tunnel, through which you escape into a hillside road which brings you to La Collinette, where, if you seek for it diligently, there is a shop—one of two which the island boasts—at which you may buy a few commodities, but not many.

Hard by is a schoolroom in which the girls are taught. The little maidens, on Sundays, dressed in dainty frocks and sashes, would make the fortune of a Kate Greenaway. Their colour harmonies are a study. You cannot imagine that such sweet simplicity and exquisite taste can cover even the possibility of naughtiness. Yet some ironical wag in the Island Council has selected the playground of the girls’ school as the most appropriate site for the Serk gaol, unless, a still more violent absurdity, the prison yard was chosen as the most suitable spot on which to plant the girls’ —not the boys’, observe, but the girls’ —school.

Peter rowed me one day around the island. Sailing would have been too risky, for the wind came in wild puffs, and the rocks and races were not to be trifled with. Besides, I wanted to see the caves and queer nooks, which could only be done in a small boat. We took several instantaneous photographs, which, considering the rollicking of the boat, came out quite well. But no photograph can give more than a feeble idea of the rock scenery of Sark, especially when seen from the sea.

The voyage across the wide bay from Les Boutiques to the Gouliot Strait between Great Serk on the left and Brecqhou on the right was exciting. The little boat rocked and rolled 'like a porpoise in a gale.' But Peter said it was quite safe, so I held on and weathered the passage.

We passed the Coupée on both sides, and afterwards I walked over it. A narrow, winding, high uplifted roadway, it unites Great and Little Serk, but it does not avail to unite the people of the two islands. Even in their French patois they are distinct.

1 The Reverend J L V Cachemaille was born in Bauhnes, near Orbe in the Vaud. Until his late 20s he worked as a pastor in his native Switzerland, but while employed to preach to the French congregation in the New-Street chapel, he was invited to join the Church of England and was ordained incumbent of Sark in 1834, at Peter Le Pelley's request. His obituary in the Guernsey Magazine of March 1877, says 'his French rendered him particularly valuable at a time when the Church pulpits were so difficult to fill owing to the universality of the French language among us and the paucity of French-speaking clergymen.'

2 'Mr Cachemaille had the misfortune to witness [in 1839 the drowning of] his personal friend, the Seigneur, Mr P Le Pelley. This accident affected him in such a manner that he did not again leave the island.' From the Guernsey Magazine. His account of his first visit to Sark 'forty years ago,' in June 1824, his surprise at receiving the offer of a position there, and his great regard for Peter Le Pelley, can be found in 'The author's first visit to Sark' in his Descriptive Sketch of the Island of Sark, 1875. His second son Ernest Grut Victor, master of the Ariel, was lost at sea in 1872. Many thanks to David Kreckeler for pointing out two articles about the Cachemaille family, in The Star of 8 May 1952, and the Guernsey Press of the same date and of 27 May, 1971. Before 1839 Cachemaille did indeed visit Guernsey. Some of his rhetoric can be read in the Star of December 21, 1833, where he rails against popery during a meeting on behalf of the 'British Society for Promoting the Religious Principles of the Reformation'.

3 Malan, Noel H. and Hume, Frank J., Sark, Practical guide and map of the island. We have copies of the 3rd and 4th editions in the Library. The books were printed by T. B. Banks in Guernsey, but are undated.

4 The next section of the article is concerned with the flora and fauna of Sark, and has not been reproduced here, but can be read in the Library.