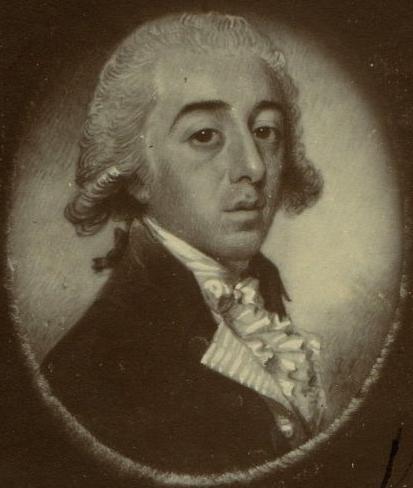 Notes by Miss Mary Elizabeth Guille on some Brock portraits. Written November 29 1902, when she was aged 81. William Brock, Henry Brock, and Harriet Brock were children of William Brock (1725-1768) and Judith de Beauvoir. The leading portrait is of William Brock; it is signed P J, for Philip Jean, and dated 1786.

[Edith Carey's note: These notes were by Mary E Guille, granddaughter of Mr and Mrs William Brock, her mother having been their daughter Judith De Beauvoir Brock, and her father the very Revd William Guille, Dean of Guernsey.1] 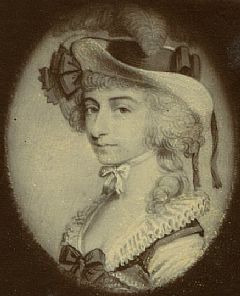 No. 3 miniature represents Mary Mourant, d. of Peter Mourant of Candie, and wife of Henry Frederick Brock. They built Paradise in the Grange in 1811, but her husband died there the following year; in the same year he planted the 'Turkey Oak' now (1902) spreading its branches over the railings in the Grange.2

It is to be noticed that the 2 brothers, William and Henry Brock married 2 sisters, Anne³ and Mary Mourant of Candie. The other daughter [Martha] married Mr Peter Dobrée of the Plaiderie and Beauregard and was the mother of Mr Peter Bonamy Dobrée, died in 1807. His only son, also Peter [Mourant Jnr.], married Sophia,4 daughter of John Carey Esq. [Edith Carey's note: My father always told me that she never wanted to marry him, but she wanted to marry some officer who was quartered here, I think his name was Teesdale, but he was then poor and Mourant was rich, so her brother made her take the latter. She was most charming and greatly beloved.] He [Peter Jnr.] died childless in 1828, and his widow died Sept 18th, 1862. The house, now, 1902, altered to suit the requirements of Candie Library is the same that was built by Mr Peter Mourant Senr, when the Candie Estate, besides its present extent, also consisted of the Candie Cemetery, the ground on which the Arsenal is built, and the row of houses on the upper part of Candie road, dos-à-dos to it, and the strip of ground opposite the Arsenal, the site of the Victoria Tower, which was given for this purpose by his grandchildren.

The landed property of William Brock in Guernsey was—Granite House at the Carrefour at the top of High Street; Brockhurst, Grange Road.5 He also inherited half of De Beauvoir Estate—green fields6 extending from the enclosure entered by the Ivy Gates to the road leading from the Rohais Road to the Croutes and bounded on the other side of the valley by the lane at the back of the Hermitage. The site of St Stephen's Church and Vicarage was given by his surviving children and grandchildren, and, since 1860, the fields have been intersected by roads and built over.

These miniatures7 were painted by Philippe Jean, who was born in Jersey, and brought up for the navy, but after 1782 practised miniature painting. He exhibited at the Royal Academy from 1787-1802 when he died at Hampstead on Sept 12th aged 47. He was miniature painter to George III.

1 These notes were copied by Edith Carey in her Scrapbook, Vol. I., in the Library collection. Mrs William Guille, that is, Judith de Beauvoir Brock, who died aged 93 on 26 June, 1888, has an obituary in The Guernsey Magazine, August, 1888, p. 70. She was sister of the Revs. Mourant Brock and Octavius Brock, and Dr William Brock, of Brockhurst.

The next remarkable dwelling is called 'Paradise', the property of Mrs Brock, widow of the late Matthew Brock, magistrate of the Royal Court; there is a neat green plat before the door, surrounded by a shrubbery; this place is admired by many in preference to any other, from its convenient distance from the road, and its cool sequestered appearance. [Cochrane, J T, Guide to the Island of Guernsey: Guernsey, Cochrane, 1826, p. 85.]

Mr and Mrs William Brock are to dine with us at our house for the first time tomorrow. I have never seen that Lady and can just tell you that she is a pretty woman, but much prettier upon a first than a second view .... [From a letter of 22 August 1793 from Martha Le Mesurier, wife of Dr. Richard Saumarez, to her sister-in-law, Martha Le Marchant, wife of James Saumarez. Transactions of the Société Guernesiaise, 1932, XI (3) p. 322.]

The house on the Grange-Road, a little above and facing Doyle Road, was built by Mr. William Brock, for his summer residence only, his winter one being in High-Street, about half a mile distant. [Ferdinand Brock Tupper, 'Guernsey in 1775 and 1837', Guernsey Magazine Vol. XVI, 1837.]

is extremely kind, very just, exceeding particular about his own rights but not less so about ours, he has taken a great deal of trouble and he hopes to be able to let the Grange for one hundred and twenty pounds a year for a term of six years. This is little, considering it was formerly worth £400, indeed last year Mamma only received £22. I do not know what the rents amount to, my uncle has not the enjoyment of them during his life as his child was still-born.'[H. Dobrée to Nancy Routh, May 29, 1818.]

7 For more miniatures, see The Mystery of the Ostrich-Feather Hat.