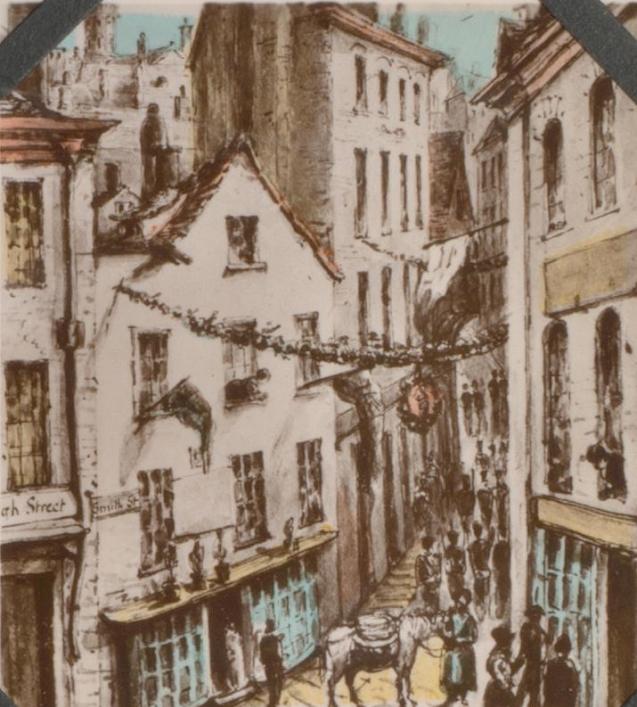 Clubs were once a great Institution in Guernsey. There was that famous old Independent at the Carrefour where Guernsey quidnuncs most did congregate in bygone days. What memories cluster round the Carrefour, a place from which, alas! the glory has departed. Who if the rising generation ever thinks about it now? Yet Carrefour House, whose solid granite front squarely faces down High Street, was once the dwelling of the Reverend Joshua Le Marchant, Rector of St Peter Port; and his Reverence, a very important personage in those days, might be seen every Sunday swelling down High Street in full bottomed wig and gown carrying his three-cornered hat in his hand on his way to the Church. I have a charming description of the Carrefour in 1770, written by his daughter, the late Mrs Thomas Andros, ‘in imitation of the style of Ossian.’ The sketch was sent to Miss Gore, in 1817, pour faire rire le Brillant [a ladies' club], concerning which I shall have something to write on a future occasion.

The sun travelled in the west behind Manoir Le Marchant and its rays darting through La Porte, and reaching Le Russé, pointed to the inhabitants of the Carrefour the hour of five.1

The Lord of Blancheland beholds with pleasure the glorious luminary which shone on his late triumphal march at the head of the Town Regiment, and was now turning his salt pans into gold.2

The seat of the Idlers is filled; some talk of this new Chief Irving, his family and his ménage; others criticise the last oration of the somniferous B-l, while the younger part watch the passing Belles, and descant on their beauties and defects.3 The head of the house of Bonami is purchasing from the Naiads of Glatney the Painclos that with Gache and the price of the Apple will compose his supper. Andro is repairing the fatal instrument which will the next day prove the destruction of thousands of innocent shrimps. Near him stands the hope of the house of Le Marchant, dividing his bread and butter with Trit and Venus.4

Fallaize knitting, and Nanny King with four infant Le Pelleys about her, sit on the grey stone of the Pastor’s door. The wit of De La Haye causes the laughter of the maidens to be heard, careless of the hpoarse reproof of Jane Gobe and the mild rebuke of L’honnete pudeur de Miss Nanny.

The fair rotundity of Prince Charles fills the narrow entrance of his house, and from the window of the shop La Princesse and her ancient sisters look scornfully on the bedgown d’Indienne of a maiden who carries smoking pies, and with prophetic rage, they denounce ruin on proud and luxurious Guernsey!

At her window sits the Dean’s son’s wife with a face round as the shield of Oscar.

The Lord of Sark leaning upon his stick listens with a sardonic smile to the hoary sire of the Tuppers, who is recounting to his astonished hearers the feats of his younger days. How when defending Le Chateau de Marêts from a asham attack, a bold assailant attempted to scale the wall, and receibved from his mighty hand  a blow which felled him ot the ground and knocked out four of  his teeth. The comb falls from the hand of B L and Marthe Marche grows pale at the recital.

The daughter of Sarnia returns to the Carrefour after many days. The sun pointed the hour on the Russé to a new race. The place knowns her no more.5

Such is the graphic, and now historic, picture of the Carrefour over a century ago. Fifty years had already effected wonderful changes in Guernsey when Mrs Andros, then 57 years old, penned a description of her girlish reminisences of the old place. Who does not remember the inimitable ‘Chins, chens livres sterlin,’ written by Mr William Le Cocq in 1815, which begins thus?

For years the old Independent Club flourished in Carrefour House, and here the old boys—were there any young members?—used to stand at the windows and take stock of the passers-by in High-Street. It was a severely respectable old Club, where such extravagances as refreshments, brandy and soda, billiards, and so forth, were never heard of. If the members wanted to play billiards, which was then considered a rather dissipated form of amusement, they had to sneak into a mysterious den down some steps leading into the harbour, and I have heard tell how sometimes the balls were sent flying through the windows down to the quay ever so many feet below. What an awkward place that quay was, so narrow that carts could hardly squeeze past each other, and vessels’ bowsprits occasionally poked themselves through the shop windows. The independent subsequently migrated ot a room over Mr Bishop’s shop, and the members then had the option of looking at the sea through the back windows or of gazing up the Arcade through the front. I wonder oif this Club still exists. It had dwindled down to nothing when I last heard of it, eclipsed totally by its young and vigorous rival, the Grange Club. I have never been able to regard the latter in the light of an Institution. The chief attraction it has for me is the novelty I experience in walking in and hailing generals, colonels, majors, and captains galore by the Christian names I have known them by ever since we were all whopped together at school. Tony, Charlie, Tom, Jack, Harry, Jem, Fred─how pat and familiar they all sound, and how, greeting the old familiar faces of our contemporaries, is it not brought home to us that if the good old folks are nearly all gone now, we are ourselves positively developing into fogies, whom the pert boys, who now strut their youthful hours on the stage, will perhaps prate about hereafter as I am doing now.

1 The reflection of the sun through La Porte reaches Le Russé which runs in the centre of the street, at five in the afternoon.

2 Mr George Le Febvre, he was Colonel of the Town Regiment.

3 A wooden Bench which stood near the house now occupied by Greenslade where the Idlers resorted. The 'somniferous B-l' refers to the Reverend Bell.

4 Mr Bonami’s house has been rebuilt and is now Marshall’s Hotel.

5 My father’s house was that now belonging to Messrs Le Mesurier and Le Maître. My brother and myself sold it in 1798. In 1822 when I stood near it, not one of the inhabitants I formerly knew remained in the neighbourhood.