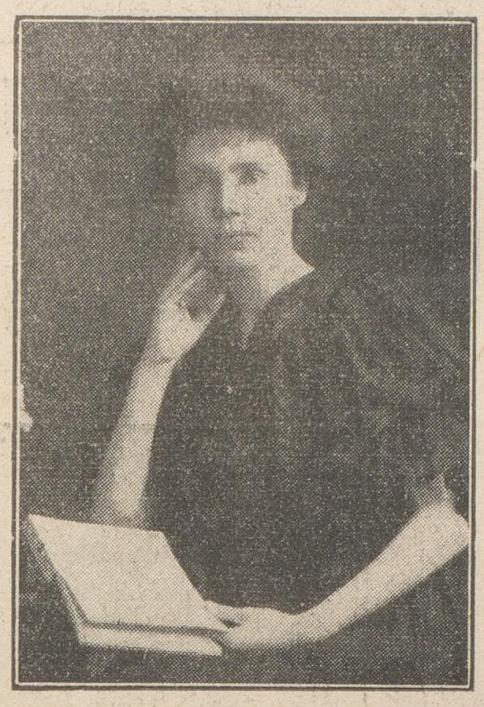 Miss Thurstan was educated at the Ladies’ College. She speaks four languages well, and can converse in another four. Included in this list is Arabic, which is especially important in the Spanish campaign, where so many Moors are engaged. During the Great War, she was Matron of the first English Ambulance sent to Brussels. While there she rendered such services to the wounded after the Battle of Mons, that she ultimately received the Star of Mons decoration. She was taken prisoner by the Germans and passed on to Denmark. From there she served in the Russian Army, first in charge of the temporary hospital, and later as head of an Ambulance training in the fighting line [with Prince and Princess Volkonsky.]. Here she was wounded, and received the Royal Cross of St George of Russia: nearly equivalent to our own VC. Later she served in Salonica, and then on the Western Front. Here she was again wounded, and received the Military Medal. Later still she was in command of a huge hospital at La Panne, in Belgium, and received medals from the Belgian Government. Then she was transferred to the Air Force, and finally, after the War, became Commandant of the Arab Refugee Camps in Egypt. It was there she learnt her Arabic.

Of Miss Thurstan’s adventures in Spain the Bath Chronicle comments that with the Universities Ambulance she was sent ahead to make preliminary preparations for the rest. Without difficulty she obtained permission from the authorities at Valencia to proceed to Almeria. To get there, however, was regarded as almost impossible. The train left at a quarter to ten at night so packed with soldiers that Miss Thurstan had to sit on her suitcase in the corridor until 4 a.m., when she managed to get a seat. Then she had to change to another line. Fortunately a restaurant was open─a rare thing. As she sat at her meal, she gave a lump of sugar to a child a crumb of bread to a fog, and a cigarette to a soldier. Probably these trifling kindnesses saved her life, for presently an Anarchist comrade insisted on her going into town with him to show her papers. In the confusion of the moment she lapsed from Spanish into Italian, and this increased his suspicion. Had she gone, she would probably have been shot at sight. However, the people in the restaurant backed her up, and the amateur policeman and his comrades departed, glaring.

Trudged behind a mule

Later she arrived at a town beyond which the trains were no longer running. She had to share a little room in an inn with a peasant girl, and next morning found herself 200 miles from Almeria, and with no means of getting there. Hearing there was a control station a mile and a half away, she put her belongings on a mule and trudged behind it. With difficulty she persuaded them to take her. At first she was regarded with suspicion, but on the way they entered an air raid zone, and found a poor little boy, shockingly injured, lying in the roadway. Miss Thurstan gave him first aid, and the soldiers lifted the lad in to the car to take him to the first ambulance they met. This entirely thawed the soldiers towards their lady passenger, and thereafter they exchanged oranges─the only food available. Fresh troubles awaited her on arrival at Almeria, and finally she was received into the household of the Danish Consul, whose hospitality was most welcome.

Almeria was packed to excess with fugitives from Malaga and elsewhere. Very little bread was obtainable, no meat, no milk, no butter. Miss Thurstan wired to Gibraltar to Lady Young, the wife of the ambulance leader, who secured supplies of food, which were despatched in a British destroyer, six and a half tons being landed in a lighter, and safely secured, under lock and key, in a store house. That evening Miss Thurstan had the pleasure of feeding sundry babies and sick children on suitable food, instead of the oranges and onions which had previously been their only obtainable diet.

The good work continues and the ambulance is in great demand.

Miss Thurstan visited her parents, Canon and Mrs Thurstan, in Guernsey when a little child, but did not reside there permanently until after the death of her grandfather. She stayed with her grandmother and aunt in 1893 and 1894. During this period she entered the Ladies’ College. Always anxious to enter the nursing profession, she began as a probationer in a little country hospital, and subsequently served in the same way in a Children’s Hospital in the East End of London. In 1900 she was in Guernsey for several months, with sufficient training behind her to be valuable as a nurse. In this capacity she acted in the Town Hospital, and in the Victoria Hospital under Dr E L Robinson. She also nursed two or three very severe private cases, among them a boy at Elizabeth College. Finally she entered the London hospital, where she had a brilliant career.

During the War she wrote three books, all of which had a large circulation. The first, written while she lay wounded in Russia, was entitled With field hospital and flying column. The second book, entitled The people who run, was written while she was acting in Poland as Commissioner for the Polish Refugees Fund in England. The third was a technical instruction to nurses, on the difference between field service and civil hospital work. After the War, while Commandant of the Refugee Camps of Senoussi Arabs in Egypt, she penetrated into regions where no white woman had been before and received a Fellowship of the Royal Geographical Society.

Miss Thurstan’s father is Dr E Paget Thurstan. He is an Old Elizabethan (No 1648). He entered in 1866, and was sports champion in 1869. He founded the College magazine The Elizabethan and went up to Cambridge in 1870.

Violetta (1879-1978) received the Royal Cross of St George for her work with the Flying Ambulance and in 1915 was sent back to England to recover from pleurisy. Her account of this time, The Hounds of War Unleashed—a nurse’s account of life on the Eastern Front during the 1914-1918 war (published in 1978), ends with the loss of her Russian fiancé, an ambulance driver. Her Spanish adventure ended with her being expelled from the country. She also wrote novels, which were published towards the end of her life, as well as books on ancient textiles and weaving, upon which subject she had become an expert. Copies of several of her books can be found in the Library. She lived in Cornwall and died at Penryn, having never married.

The Library has a carte de visite of Violetta, and one of a nurse in full uniform that may be her, from a photograph album (Strong room) probably belonging to one of the Carey family. Please contact a Librarian should you wish to see these.

For further information: Liz Walton on Violetta Thurstan in Channel Islands and the Great War explores her Guernsey links in addition to giving a thorough account of her life.