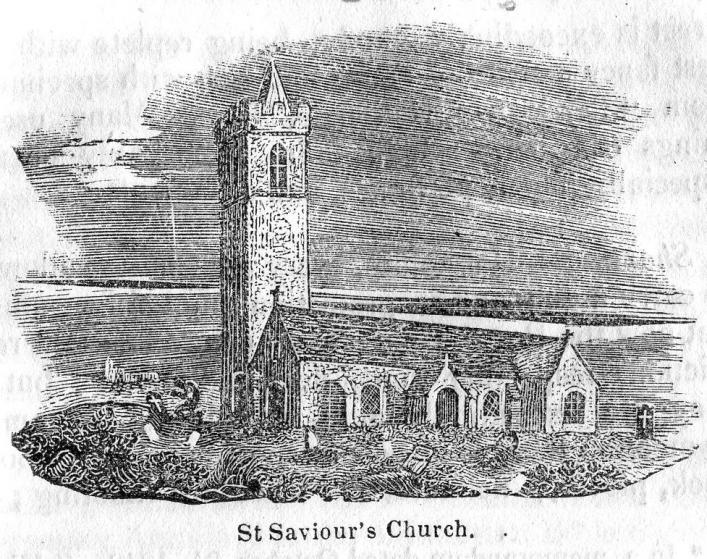 Tonnerre, foudre et orage. From Pierre Le Roy's Notebook, edited and transcribed by the Reverend G Lee in 1893 under the auspices of the Guille-Alles Library. The woodcut is by Dr Thomas Bellamy, from his Guide of 1843.

Sunday, 30th of January, 1658. Accident happened to the Church of St Saviour, by a great by a great thunder, lightning and storm, so that part of the tower was carried away, towards the end of the service.

Edith Carey writes a note to this entry. 'From Recueil de Variétés, Greffe, supposed, by C J Cox, to have been made by Sir Peter de Havilland. 'A L'Eglise de St Sauveur le 30eme Janvier 1658, God sent that day, a Sunday, during the evening service, three terrible flashes of lightning; the third hit when the congregation was singing the second verse of Psalm 132, and caused the people inside the Church to be thrown to the ground, most of them unable to stand up or walk. The strike knocked out the whole of the great North window of the church, and destroyed it from the ground up.' The small bell fell to the floor, and part of the tower fell; and the rubble was carried far from the church by the whirlwind. &c.' T F Priaulx, in his Brief History of St Saviour's Church, describes the disaster and mentions an account in the St Saviour's Church Registers, shown in the photograph below. Priaulx has more elaborate details of the incident, including 'some reports state that the grass verges bordering Les Buttes Road, 400 yards east of the Church, were littered with debris,' and that 'the spire was lifted 18ft up in the air.' The 'reports' that include these details have not yet been identified. 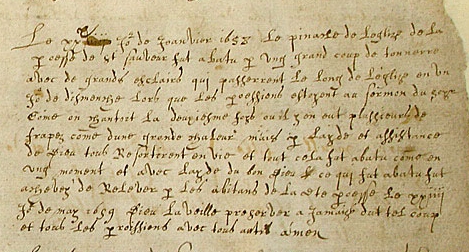 The tower of the parish church was brought down by a huge thunder clap and a great flash of lightning that travelled the length of the church, one Sunday when the parishioners were at evening service; as they were singing the second verse several people were struck as though by a great heat and all fell down at the same moment, but everyone came to again with God's help. With God's assistance everything that had been damaged was repaired by the parishioners, and the work was finished on the 24th of May 1659. May God preserve the Church and all her parishioners and everyone from such a disaster ever happening again. Amen.

Priaulx's guide then points out where the church and tower were rebuilt; the present north door replaced the great north window, which was destroyed.

E B Moullin writes about this incident in the Report & Trans. Soc. Guern. (1953) p. 307. The rector at the time was Mr John Morehead. Moullin's analysis of the registers shows that the church continued to be used despite the damage. He tells us that

when the damage was repared the Piscina was not replaced in the church. It still exists, built into an inside wall of a Blondel house, at Les Grands Courtils, near St Appolline.There are stones built into the house of Les Masseys, less than a mile west of the Church. which are said to have come from the church in 1659. Several people are reported to have taken stones and to have inserted them into the walls of their houses and stables, to act as charms to keep the Devil away.