Sword Exercise of the Cavalry 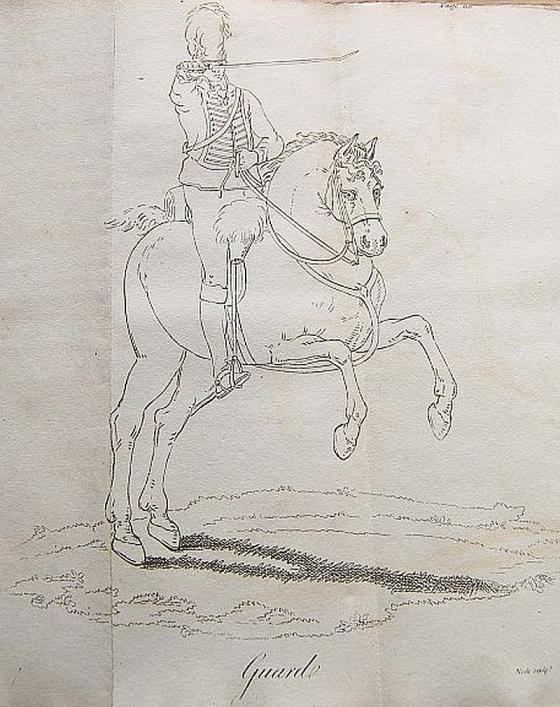 J. Gaspard Le Marchant, Rules and Regulations for the Sword Exercise of the Cavalry, LONDON, PRINTED for the WAR OFFICE, and sold by T. EGERTON, MILITARY LIBRARY, WHITEHALL, 1796.

This volume is a first edition of one of the first purpose-written instruction manuals for the training of officers in the British Army. It was entirely the brainchild of Major-General J. Gaspard Le Marchant, who is famed for founding the Royal Military College at Sandhurst, and leading the charge at the Battle of Salamanca in 1812, which resulted in a British victory and a hero's death. He has a memorial in St Paul's Cathedral, erected at public expense.

Born in Amiens to a father from a prominent Guernsey family and a mother who was a minor Swiss aristocrat, Le Marchant was brought up in Guernsey and entered the army at sixteen, taking part in the disastrous Flanders campaign of 1793-4. He returned to England a major in the 16th Queen’s Light Dragoons. The Duke of York realised that the army was in dire need of reform and Gaspard Le Marchant had plenty of ideas as to how it might be achieved.

He had a maxim: 'It is only by doing what others do not, that you get on.'

He had not wasted his time on active service, and he returned with a wholesome respect for the professional polish of foreign cavalry, particularly the Austrians ... the caustic observation of an Austrian officer - who remarked that British sword-play, though most entertaining, put him in mind of somebody chopping wood.In many a skirmish the unfortunate horse was the sufferer, taking a gash on the head or neck.In others, the rider had the mortification of slashing himself.Le Marchant recalled seeing a captain of dragoons come near to severing his own foot, and the surgeon frequently complained that some of the wounds he dressed could only have been inflicted by the victim’s own sword.¹

Fortuitously, Le Marchant's skill at watercolour painting and the patronage of the Duke of York had won him the ear of the King, and he asked him for his support in devising a new sword drill, threatening to leave the service if he was not allowed to progress. He had also identified another rather significant failing in the cavalry—they were not very good at riding. He himself was a superb horseman, but needed to work on his own swordsmanship and designed a 'run,' with two standing targets, or 'machines,' one of which was a turnip for slashing, the other a ring through which the horseman 'gave point.' Assiduous practice had the desired result, and the ring was soon reduced to the size of a crown piece. At the same time he began to redesign the cavalryman’s sword. Each regiment had its own design and they were all unfit for purpose; too long, too easily shattered, too curved, too unbalanced, too heavy, two-edged and designed for thrusting. The cavalry had increased the speed of their attack, which was always now 'at the gallop,' but their swords remained suited to slower old-fashioned methods. Le Marchant had noticed the success of the Ottoman Turkish cavalry, who sported light, short, curved scimitars. He worked with a swordsmith from Birmingham, Henry Osborn, and created a light, slightly curved sabre with a light hilt, based on the measurements of Andrea Ferrara, a 16th century Venetian swordmaker. Still admired today for its economical and elegant design, it was adopted and remained in use for the next 20 years; it found favour, too, with the Prussian Army, who copied it.

Rules and Regulations for the Sword Exercise of the Cavalry was partly illustrated by his young brother-in-law, Peter Carey, for whom he had purchased a cornetship in the 16th dragoons (and who would go on to become a major-general; another brother-in-law, Tom, was already a major). Peter had studied art and his illustrations were carefully done, but as he could never quite get his horses to Gaspard’s satisfaction, the illustrations were completed by a London artist. The Library has Peter's own beautifully bound copy of this book in its collection. 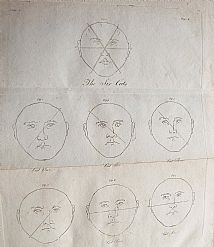 Le Marchant had been ordered to test his theories on various troupes around the country; the try-outs were successful, and the drill book was published as an addition to the permanent regulations of the cavalry on 1 December 1796. Le Marchant rolled out the drill to centres across the country; the first printing of 1000 copies sold out in six weeks and the book became a favourite of the King. Le Marchant was promoted to Lieutenant-Colonel in the 7th dragoons and spent his time teaching horsemanship in Tunbridge Wells. He continued to write, and published The Duty of Officers on the Outpost. It was feared that Napoleon was going to invade England; Le Marchant invented a scheme for a Home Guard, and published Elucidation of Cavalry Movements and Instructions for the Formation and Discipline of the Professional Cavalry, spending the next two years writing instruction manuals for the cavalry at the behest of the Duke of York.

However, by 1798 Britain was the only major European power lacking a school of war; the only college was the Royal Military Academy at Woolwich, which trained the artillery and engineers. No money was ever forthcoming, even when the Duke of Richmond had suggested setting up a training institution several years before. There was an unspoken fear of a military coup, should soldiers be properly trained; and it was assumed that soldiers naturally know how to fight. Following the recent bad defeats at the hands of the French, however, mood was pessimistic. Le Marchant was determined to find a solution, expanding what he had begun with his teaching of the sword drill. He drew up a comprehensive plan, showing, importantly, how such an academy for officers could actually bring in funds for the government, and published a pamphlet privately, 80 copies of which he distributed to influential parties; he obtained a surprising amount of support.

The Duke of York suggested he join forces with General Jarry, a Frenchman who taught in his own private school at High Wycombe. Le Marchant was appointed Commandant and Jarry Director of Instruction, and the Academy opened on 4 May 1799. General Jarry could not speak English, and the instruction manuals were written in both French and English; it was unfortunate that Le Marchant, who was fluent in French, rather underestimated the prowess of the students, who mostly could not understand a word of what the General was saying. Jarry also set his sights rather high, expecting the students to know geometry and trigonometry and a great deal about the technical aspects of weaponry before they started. However, his knowledge of and teaching of logistics was forward-thinking and proved invaluable to the army. A Junior department was eventually set up at Marlow, but there was no support for Le Marchant’s plan for a cohort of educated non-commissioned officers; it was felt in some quarters that ordinary soldiers would refuse to serve under their former colleagues.

In 1801 Le Marchant produced a document completely reforming the administration of the army on the ground, An Outline for the Formation of A General Staff to the Army, and The Duties of An Assistant Quarter-Master General attached to a Division, and despite being progressive, far-reaching and comprehensive, they were slowly adopted.In all, Le Marchant had a great influence at a time of real reform in the army.

After fourteen years at Wycombe, the Royal Military Academy moved to a purpose-built site at Bagshot Heath, on a plot bought from William Pitt, known as Sandhurst. Work began in 1808 but Le Marchant did not see its completion. In 1811 he was sent to Spain as head of the heavy cavalry. The Duke of York was concerned about the state of the cavalry and Le Marchant was probably given his command because he could effect change without causing offence to Wellington.

On 22 July, 1812, he led the heavy brigade in the total destruction of the French left wing at Salamanca and ensured the greatest British victory in a century. In going to the aid of one of his lieutenants who was taking on a small group of French stragglers he took a bullet through the spine and was killed instantly. He was buried two days later in an olive grove, near where he fell. £1500 was voted by the House of Lords for a memorial, which was erected in St Paul's Cathedral.

The arms of Frimley and Camberley borough council (the location of Sandhurst) featured the three white owls of the Le Marchants; these have now been subsumed into Surrey Heath Council coat of arms, retaining one owl.

This Priaulx Library copy is not originally from Guernsey and bears the inscription Jonathan Hulme's Book July 15th 1797. A look at the Army Lists in the Library has revealed a John Lyon Hulme in the Royal Engineers. He is first listed as 2nd Lieutenant in 1809 and Captain in 1814; having received honours for the Battles of the Nivelle and Nive, he eventually retired on full pay, and was promoted to Major in 1854. He may be the same man who owned our book.

Other references of interest: