A tale of St George's chapel 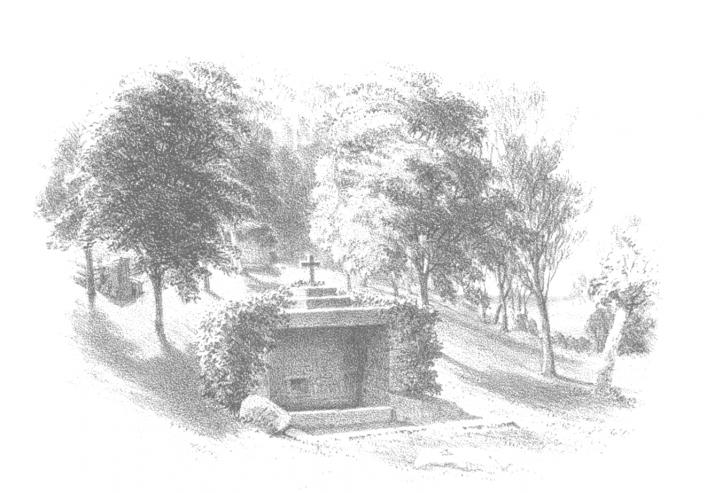 A ghost story, from The Stranger's Guide to the islands of Guernsey and Jersey, Guernsey: Collins /Barbet 1833, pp. 17-18. The illustration is from The Channel Islands, historical and legendary sketches, a book of poetry by C J Metcalfe, Jnr., London: Simpkin, Marshall and Co., 1852.

Adjoining the chapel of St George was a cemetery, the bones of the saints from which served as valuable relics in the working of miracles, foretelling future events, removing witchcraft, &c. A singular tale is related of one of those relics. A female of devout habits had disappeared from her friends and was found after a long search near the Hanois rocks in the bay of Rocquaine, deprived of life by some unknown hand: she was an only daughter and much lamented by her parents, who were said to have been inconsolable at her loss, and to have died of grief. The mangled body was buried in the cemetery of St George, and her ghost continued to haunt the spot, to the terror of many, sometimes assuming the human form, ghastly in appearance, with bleeding wounds, and uttering piteous cries; at other times in a winding sheet, emerging from a coffin, bearing the cross supported by rosaries and other terrestrial habilliments: it often became an aerial being with head and shoulders and wings, flying like a seraph, and on several occasions assumed the naked human skeleton with phosphoric bones, yielding a glimmering light in the dark, of terrific grandeur. But when the midnight hour arrived, after uttering a hollow groan accompanied with loud peals of thunder, the spirit gradually disappeared on the tomb of the deceased, when after a rustling wind, the stillness of death reigned on the spot for several successive hours.

That the dark deed of murder, however secretly perpetrated, can seldom be concealed for any length of time, is miraculously evinced by the sequel of the present narrative. It happened after the lapse of several years, that the grave of this unfortunate woman was opened for the reception of another inmate: when one of the spectators examined a bone with marks of violence, which had been thrown out, and passing it round the crowd of mourners, it got into the hands of a person who had never been suspected of the murder; but the moment it was in his possession, the dry bone yielded a stream of blood to the horror of all present: the culprit was so struck with terror, he made a full confession of the inhuman murder, together with the manner of its perpetration. He was duly tried in a few weeks from the discovery, and executed at St Andrew's; after which period the apparition ceased to visit its nocturnal haunts in the cemetery of St George.