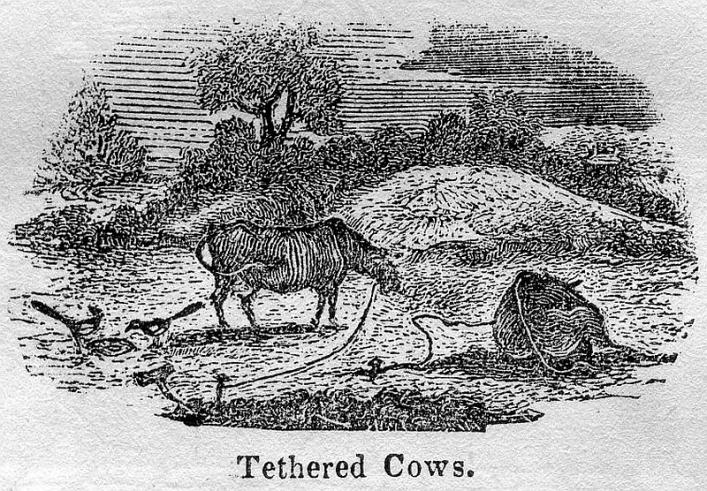 In view of the current controversy over tethering, here is a view of the practice in Guernsey from Duncan's Guernsey and Jersey Magazine in 1836. The woodcut is by Dr Thomas Bellamy from his 1843 Pictorial Directory in the Library Collection.

Three vergees and a half of good ground are sufficient to afford food for one cow during the year. It is an invariable practice throughout Guernsey to tether the cattle, staking them by the horns to the earth, by means of an iron or wooden peg, attached to the halter about twelve feet in length. This is shifted four of five times per diem, allowing a fresh range of from two to five feet each time. By this system the most is made of the grass, for none can be trodden down or wasted.

David Ansted, in his The Channel Islands of 1862, speculates that tethering leads to the yellow colouring of the Guernsey cow and its products because of the lack of exercise it allows the animal. The Reverend John Skinner, in his visit to the island in 1827, noted the horses and cows tied by the leg 'to prevent them ranging and grazing' freely. 'By this method, he says, every grain of grass must be consumed 'and the dung they return in payment for this feed, collected to be burnt by the provident peasant.' QRGS 35 (2), pp. 37 ff.

Samuel Lewis, in A Topographical Dictionary of England, 1831, says of Guernsey:

'Five vergees of grass are computed to be enough for a cow; and the custom of tethering cattle is general. This practice, as it exists in Guernsey, is highly advantageous, since the fields are regularly eeaten through, and, by the time the cattle have finished a meadow, the grass on which they commenced is usually forward enough to afford a second pasture.'

'The treatment of these [cows] is thus described by an old author: 'It is true that in summer she must submit to be staked to the ground: but five or six times in the day her station is shifted. In winter she is warmly housed by night and fed with the precious parsnip. When she calves she is regaled with toast, and with the nectar of the island, cider, to which powdered ginger is added.'