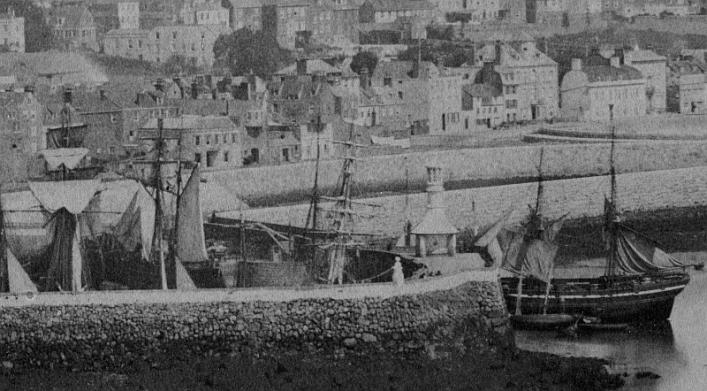 How the sea-front looked seventy years ago, by 'Observer' (1923). The accompanying photograph, from the Library collection, is a detail from a panorama taken by Arsène Garnier of the harbour early in its rebuilding in 1857. The detail below shows the temporary cement mill erected for the works.

See also A peep into the past: the East Coast

Cow Lane; Shipyards; The Piette; The Long Store; The Pond

Seventy years ago Castle Cornet stood on a rock which was completely cut off from the mainland at half-tide. At full tide there was sufficient depth of water for steamboats and sailing vessels outward or inward bound to pass. At low tide the soldiers who were stationed at Castle Cornet proceeded to and fro by means of a causeway which then existed. The Star of that date records several drowning cases which occurred either as a result of the boats which carried on a ferry service between the island and the Castle being swamped in rough weather, or of persons imprudently attempting to cross when the tide was rising rapidly.

At the period in question, the South beach, or Galet de Heaume, as it was then known, was entirely covered by the sea, which in gales was driven to the foot of the houses in the Strand. Northward of the Galet de Heaume was more beach which extended to what is now the Albert Dock, the retaining wall on the South side being formed by the beginning of the arm which extends to Castle Cornet, the other wall on the North side having been incorporated into what was left of the South arm of the old Harbour. At the back of the beach, close under the cliff, there were one or two shipbuilding yards, as well as a smaller yard in which a Mr Parrett was always busy in making pleasure and fishing boats. At high water people could not pass the spot which is now occupied by the plantation which faces the Albert Pier, and when going to and from the Valette had to proceed through the Strand.

On the West side of the Old Harbour, opposite the Town Church, there was a tunnel under the Quay, through which the oxen which had been lowered from or dropped over the sides of the vessels which had brought them from France or elsewhere were driven. They then passed through Cow Lane, and ascending a slight incline, entered Church Square, whence they were herded—usually unhaltered—to their various destinations in the country to graze and fatten before being turned into beef. In those days imported cattle, through being allowed to recuperate several weeks after their sea journey were equal to those which had been reared in Guernsey. At that time any butcher or farmer was allowed to slaughter cattle intended for market on his own premises. Besides private slaughter-houses there was the abattoir, which stands alongside the Picquet-house.

The present spacious coal-quay was only about a third of its width today, and ended near the Crown Hotel, opposite which was the East arm of the Old Harbour. The North beach which is now occupied by the Careening hard adjoined the Crown Hotel, which was as famous a hostel as it is today. At low water the buses which plied between Town and St Sampson, and vehicles in general, passed across the beach to the Glategny Esplanade, but when the tide was high they had to drive through the Pollet. At very high spring tides the sea almost washed the bases of the houses in the Pollet, and once, during a strong South-Easterly gale, a vessel was driven so high upon the beach that her jib-boom actually went through the window of a cabinet-maker’s shop which was situated under the old Temperance Hall, to the great consternation of the men who were at work there. The late Mr James Cressard, afterwards a cabinet-maker on his own account there—he was an apprentice at the time—told me many years ago that he distinctly remembered the incident. About the same time a French chasse-marée was wrecked near the Crown Hotel. The story was related to me a few weeks ago by an octogenarian resident of the Town who was an eyewitness of the incident. Among the vessel’s cargo was a great number of ducks, geese, and fowls. Almost all the latter were drowned, but the former swam ashore and were saved. 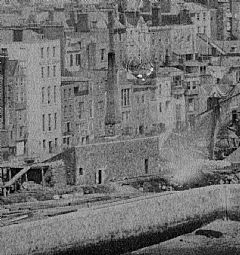 Where Mr Marks’ potato store now stands there was a shipbuilding yard which was owned by a Mr Spur[a]way, and on the space now occupied by the bottom of St Julian’s Avenue was another shipbuilding yard, the proprietor of which was the late Mr Matthew de Putron, whose foreman, Mr Peter de Putron, was drowned about ten years ago, through falling overboard from a cutter while it was on its way up the Little Russell. Many fine vessels were launched from this yard. But when I say 'launched,' I am not using the correct expression, for the Esplanade was too flat to permit a vessel to slide across it from the yard. Actually the cradle had to be dragged on specially prepared 'ways' by means of a stout rope, passed around the drum of a 'crab' which was turned to the accompaniment of a song by means of long wooden bars, against which the shipyard hands pressed with all their might. When sufficiently low on the beach, the vessel was left there, and as the tide rose—a spring tide being always selected for the occasion—she floated off the ways and was towed into the Town Harbour to be fitted with masts and prepared for sea.

Where the St Julian Weighbridge now stands two houses existed, and between them and Mr Newbury’s public house there was a road through which people who wished to go across the beach leading to the Crown Hotel had to pass. Near these houses there was a descent which led to the 'Bridge,' a gravelled causeway that led to the White or St Julian’s rock. Here the passengers from the steamboats which arrived from England or Jersey landed at low water on some slippery rocks. At high tide the steamers brought up in the 'roads' which are known as 'the pool,' and the passengers landed at some steps in the Old Harbour. It was at the steps in the South-West corner of the Old Harbour, that Queen Victoria and the Price Consort landed in 1846.

At the Piette there was another shipbuilding yard belonging to Messrs Marquand and de la Mare, and near the Hougue-à-la-Perre, still another which was destroyed by fire in the ‘70s of the last century. To reach the Piette it was necessary to pass through Salter Street, which was situated near the Salerie. In those days it was a veritable street, as three houses stood opposite those which still exist. On one of these the name of the street may be read to this day. On the approach to the Salerie Battery—whose furnace for making shots red-hot to be employed against enemy vessels which at that time were made of wood, was almost intact up to a few years ago—there stood two other houses, but they like the three others were taken down some forty or fifty years ago. Almost opposite the Piette two houses were actually built out upon the beach on a mound enclosed by solid masonry which had been specially erected to receive them. They were all that could be desired when the weather was fine, but I remember, when a small boy, during a gale seeing the sea sweep entirely through these houses, the back doors of which had been smashed by the waves, and the front doors carried off their hinges. Trifling incidents of this kind did not dishearten the residents, for as soon as normal conditions had returned they proceeded to dry their houses and repair the damage, and calmly await the next visitation.

A little further on is the Long Store—the district being formerly known as Les Mares Pirouin—the name Pirouin applying to a battery which was in the neighbourhood. Few persons know how the road received its name, and I must admit that until a few months ago I was included in the number. Well, my octogenarian friend, whom I have mentioned before, explained the reason, and it was this. When he was a boy, and until the year 1850, when the Town Arsenal was built, there existed, facing the brick house at the corner of Gas Lane, with its back to the sea, a very long one-storied building which was used as a depot for the sixteen guns of the Royal Guernsey Field Artillery, a corps which was disbanded not very many years ago. Hence the name 'Long Store,' which appears to have come to stay. The building, or one nearby, was used as the depot for the rifles and accoutrements of the 1st, or East Regiment of Infantry.

In connection with the Town Harbour, it may be interesting to mention that on the site now occupied by the lairage and slaughter-house near the 'Suffrance Wharf' at the beginning of the pier leading to Castle Cornet, stood the mill which was used to grind the cement that was employed in connection with the Harbour works. When the latter were in progress, the plan included the construction of a ladies’ bathing place—at least the scheme was suggested—was made [sic] on the St Julian’s Emplacement. When I was a boy, the walls which surrounded it were the same condition as when they had been completed, but the space between them had not been filled in. Consequently the water flowed into it, and from half-tide when the water was rising until it had fallen again for a few hours, it was greatly in request as a model yacht pond, and profound was the dissatisfaction of my fellow juveniles when it was decided to fill in the space, which was afterwards occupied, by what will probably never be forgotten—the 'Black Sheds.' The latter had a chequered career, until finally they were destroyed and the site they occupied utilised for the buildings which are now used by several fruit exporting agencies.