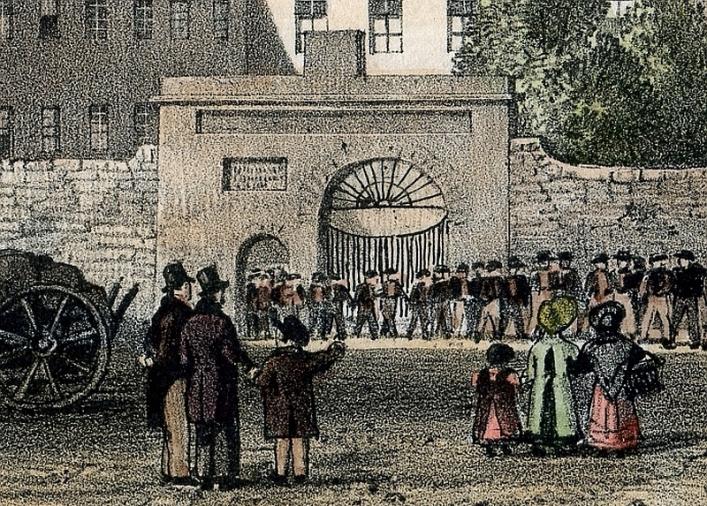 The impecunious Thomas Le Marchant of La Plaiderie died in 1762, leaving a family of young children. His estate at L'Hyvreuse, which included what is now Beau Séjour, was bought by William Dobrée, his children's guardian. Part was then sold to the States of Guernsey; L'Hyvreuse house was demolished and the land used for recreation and as a parade ground for the militia. The imposing double gateway, 'similar to that called Ivy Gates, but much handsomer,' to L'Hyvreuse house was all that remained; it then served as an entrance to the New Ground, or what we now know as Cambridge Park, but proved too narrow for purpose. Known as 'the Arch-way at the New Ground,' it was eventually removed and re-erected at the Town Hospital.

The pelican above the arch, a symbol of charity, was commissioned after the gate was installed at the Hospital and was the work of F Young, a local mason. 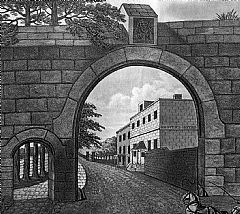 In the accompanying picture from Berry's History, drawn in 1814, the gateway is still in place at the New Ground; Grover's Hotel stands where the present Duke of Richmond Hotel now is in Cambridge Park Road. The coloured Moss print at the top of the article, c. 1829, shows the gateway in place, without the armorial stone, which was bought by Mr. Le Marchant-Thomas, removed and set above a gateway at L'Haye du Puits. A similar painting from 1803 by John Carey of what are probably the Ivy Gates can be found in the Quarterly Review of the Guernsey Society, VII (4), Winter, 1952, and a 1953 photograph of the double gateway to 'Normanville' in X (1/2), Autumn 1954 (built, however, in 1883; there is no evidence of an original).

Since several Heads of Families of this parish are in agreement with the undersigned, in wishing to see the great Gateway (recently demolished) of the Hospital re-erected facing Hirzel Street, the undersigned, as per their wishes, request that Messieurs the Heads of Families meet next Wednesday at 11 a.m. in the Town Church to agree and arrange the means necessary to effect this, and to agree to take any other measures that the case may necessitate.

Everyone appears to be in agreement with several of the Heads of Families of St Peter Port in wishing to see the great Gateway of the Hospital placed facing Hirzel Street, rather than in the place the Directors intend to put it; but the Directors, who have taken offence because someone has published a notice, and because not everyone shares their opinion, have unanimously decided to object to this, 'right or wrong!'. Very well, Sirs, do as you will; the only aim of the signatories is to beautify the external appearance of a hospital that brings the parish so much honour, and to erect the gate where it can at least be prominent and visible, not only from Hirzel Street but also from Smith Street. The Directors want to put it where it could not be seen at all. It would have been better to have left it where it was and saved the parish money they were never authorised to expend; 'but,' say Messieurs the Directors, 'come and see our grand portico and our superb Salon, and you will realise how magnificent a prospect there will be when the gateway is built opposite.' I quite agree, Mr Treasurer, when you are sitting on your throne, and you Mr Directors Sirs, upon your velvet chairs, the prospect will be admirable; but whereas for every one visitor you have, do you not think there will be 99 who will be happy with the exterior of this building and who, if you go through with your plan, will, I fear, have very good reason to be unhappy with your work. From a contributor.

On Wednesday a meeting took place of the parish Heads of Families of St Peter Port, to discuss the placement of the great entrance gate of the hospital; certain parishioners had voiced a wish to see it erected facing Hirzel Street, and as a result a notice had been issued calling a parish meeting on the subject. The Treasurer and Directors did not agree and maintained that the the gate should be placed opposite the door of the building they had recently had constructed. After a debate with contributions from, amongst others, Messieurs N. Maingy, jun., James Jeremie and W. P. Le Cocq, on behalf of the Directors, and Messieurs Pierre Bredthafft, Joseph Collings, James Agnew, and Col. T. F. De Havilland in support of the parishioners, it was decided by a majority of five or six votes, that the gate would be rebuilt in the place favoured by the Directors. [From the French.]