Victor Hugo and Guernsey: The Breakwater 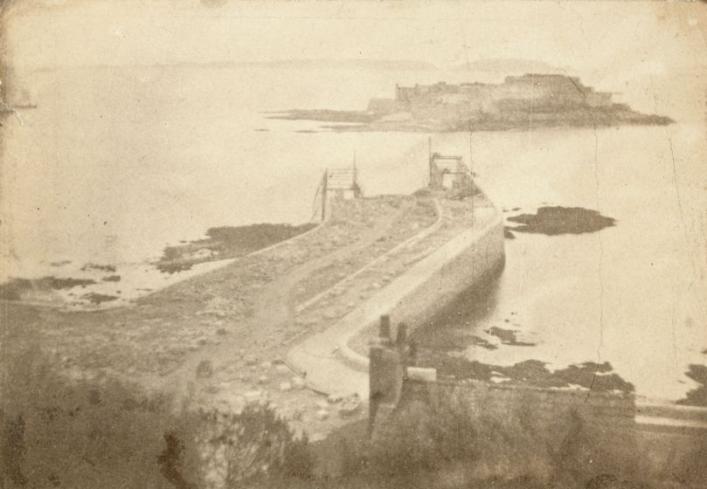 Opinions on the building of the Castle Emplacement from Victor Hugo and his son Charles. Charles took the accompanying photograph, The Castle Emplacement under construction, c 1856; he also took a fine study of St Catherine's Breakwater in Jersey some years earlier. (Hugo family friend Auguste Vacquerie was also an excellent photographer, and may possibly be responsible for this photograph, but Charles shared his father's appreciation of the effort and skill required to build these types of structures, and of the progress and growth they embodied, and is likely to have found this and the Jersey breakwater an appealing subject). The photograph is in the collection of Paris Musées: Construction de la digue reliant le château Cornet au port, attribuée à Charles Hugo, 1855-6.

Victor Hugo’s opinion on Guernsey, from a speech given at a dinner in his house, July 26, 1856

'Jersey believes itself to be as superior to Guernsey as does Paris to any provincial city, and looks down upon Guernsey from the height of what it believes to be its greatness. For me, I had, despite myself, absorbed this notion and believed that the people of Jersey were right. But it did not take me long to realise my mistake. I find Guernsey much more beautiful than Jersey; it is true that this is  entirely attributable to natural causes; but what is down to the Guernsey people themselves is that they are infinitely more intelligent, polite, and civilised that the people of Jersey. I have found in Guernsey politeness, helpfulness, sense, probity everywhere; the courts administer justice, which is saying quite a lot these days.

There is one thing of which I am certain, which is that as soon as you have finished building this fine port that I am watching growing, as it were, beneath my window, once the railway from Paris to Cherbourg is completed, Jersey’s prosperity will pass to here, and Guernsey will be able in its turn to look at Jersey from the height of its greatness.' [From the French: DAB]

‘The sight of the huge works in granite that [the Channel Islanders] have built at their ports is always awe-inspiring; their tremendous constructions out to sea, and their mighty jetties, which are the equal of our naval bases, all these are down to themselves alone. On the moral side, you come unexpectedly across two strange fruits, everywhere else very slow to ripen: religious tolerance and the freedom of the press.’ [Charles Hugo, Chez Victor Hugo par un passant, Paris: Cadart & Luquet, 1864]