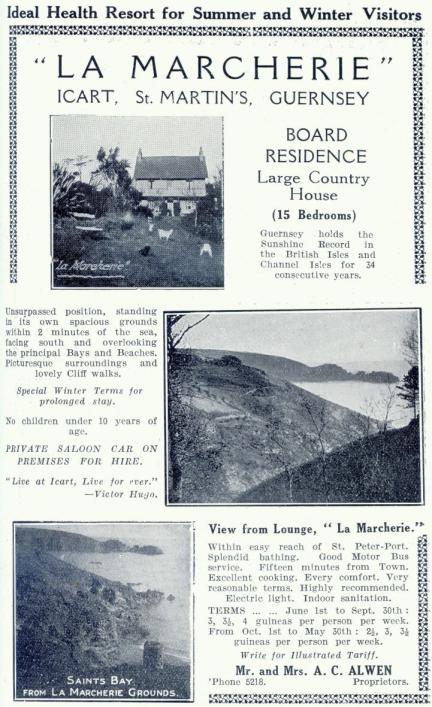 Once a magnificent farm house with 15 bedrooms, made of the best blue granite, said to be haunted, the old house of the [de] La Marche family in St Martin's saw highs and lows. Its story ended with demolition by the Occupying Forces in 1944, and the memory of the house itself and a reputed connection with Victor Hugo became shrouded in mystery. It is quite possible that Victor Hugo admired the house - he certainly would have admired its wonderful situation, and is quoted as saying (in the advertisement above from a 1915 tourist brochure), 'Live at Icart, live forever!,' but there is no evidence he ever set foot in it. His family, however, were indeed intimately connected with it. [By Dinah Bott]

When Victor Hugo died in 1885, he was attended on his last night by his daughter-in-law Alice (the widow of his son Charles, now Mme Edouard Lockroy), and family friend Aline Ménard-Dorian. Aline (b. 1848) was the daughter of a self-made steel magnate from Saint-Etienne, Pierre-Frédéric Dorian, who as an extremely popular Deputy and a stalwart member of the opposition helped to bring down Napoléon III. He was Minister of Public Works during the Franco-Prussian War and his prodigious knowledge of engineering and weapons manufacture enabled the French to hold off the enemy. He died exhausted in 1873, much mourned by his friend Gambetta.

Everyone knew her charm, her curiosity in all aspects of the intellectual and of art, her openness of character, her helpfulness, her welcoming and courageous nature, ready to speak up for her beliefs; her passion for art and her perfect good taste made of her not only a wonderful chatelaine but also a grande dame of the bourgeoisie, her opinions socialist and libertarian, anticlerical, deeply engaged in the political life of the period. She fought until her death on behalf of the Socialist party and for the League for the Rights of man and the citizen [founded at the time of the Dreyfus Affair].

She even became the Secretary-General of the International Federation of the Leagues of the Rights of Man.  She was supported in this by her husband, a wealthy Protestant politician from the Midi, whom she married during the Siege of Paris and who became a Deputy in 1877. He took over from Aline’s father as director of the Holzer steelworks.  From around 1889, at their house at 89, rue de la Faisanderie, in Paris, ‘l’infatigable Mme Ménard-Dorian’ kept a sumptuous salon, inviting many of the famous republican politicians and artists of the day. Literary lions were favoured, and regular attendees included Daudet, Goncourt and Zola, as well as Satie and Rodin. Later her salon became ‘the fortress of Dreyfusism,’ and she and her husband became ‘revolutionaries, almost collectivists.’¹

Aline had long sought the company of authors, most notably that of Victor Hugo.² In fact, Aline Ménard-Dorian, with her daughter Pauline, who was the same age as Hugo’s grandchildren, had accompanied Hugo to Guernsey for his convalescence in 1878. On the 9 August 1878 Paul Ménard wrote from the family steelworks at Unieux: ‘Good news from Guernsey, where I persuaded Aline to stay on at least until Pauline has had her full thirty dips in the sea.’ The image below is a detail from the well-known photograph by André of Hugo and his family and friends sitting on the terrace at Hauteville House, taken during Hugo's stay in Guernsey in 1878; it shows, from the left, Alice Lockroy, Georges Hugo, Pauline Ménard-Dorian and Aline Ménard-Dorian. 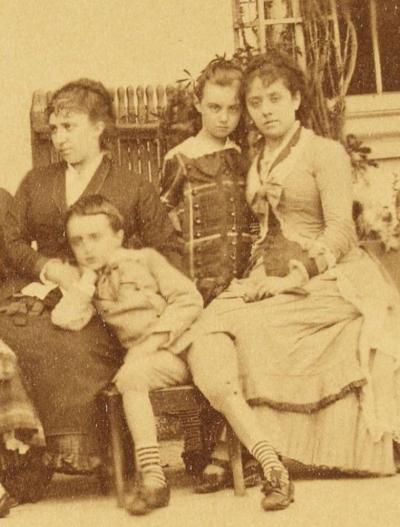 Although after Juliette Drouet‘s death Hugo refused invitations, one of his last outings was to Aline’s salon.

That evening at the Ménard-Dorians’ all the famous names in literature, in art and in politics were in attendance. When the august old man arrived, his eyes deep blue, and within the serenity of his last years upon him, everyone lined up respectfully. Hidden boxes in the ceiling opened and out cascaded rose petals, an extraordinary profusion of roses which scented the rooms and dizzied those present with its magnificence. He walked steadily towards the mistress of the house, whose grace and elegance have already been described, and kissed her hand. A small hidden orchestra began to play Saint-Saën’s Hymn to Victor Hugo. It was an apotheosis, but restrained and in perfect taste.  He who had lived through and observed the century stopped to greet one then another, stroking the heads of the children with his beautiful hands, skin as fine as parchment, lost in thought until he noticed those beings who were now all his life: his grand-children Georges and Jeanne, who were dancing the minuet from Don Juan with the young daughter of the house [Pauline], Clémenceau’s eldest daughter, a daughter of Paul Meurice, and Léon Daudet, ‘a set of wild, gay, and horribly spoiled young people.’ And it was this very salon that would see, in addition to the engagement of Léon Daudet and Jeanne Hugo, the courtship of Georges Hugo and Pauline Ménard-Dorian, who would marry in 1895.³

After Hugo’s death, the Hugo family spent many of their summers in Guernsey at Hauteville House. They brought friends with them, and as the children got older, they brought their own friends. In the late 1880s and early 1890s things began to move on the romantic front. Jeanne, just 21, married Léon Daudet, and in 1893 the engagement of Georges to Pauline Ménard-Dorian was announced. Georges was doing his national service in the navy. The Ménard-Dorians wanted a holiday home near their close friends and soon-to-be-relations by marriage.

On the cliffs at Icart, a the end of Saint’s Road next to Saint’s farm, there stood  a large and ancient farmhouse with a spectacular view, known as ‘La Marcherie’ after the family who originally lived there, the [De la] Marche. The first recorded owner of this house at Icart was Collas Marche, son of Collas, in 1666. It passed through the hands of the Robert family in the 1720s and by the 1830s it belonged to Thomas Ogier. In 1882 it was owned by a banker, William Macey Jones, who advertised it for sale or rent in March, 1892.

TO BE SOLD, with immediate possession, the above ESTATE, containing a modern DWELLING HOUSE, with all necessary conveniences, STABLES and other FARM BUILDINGS known as ‘ICART BARRACKS’ and GREENHOUSES, the whole measuring from 39 to 40 vergees of land.

This property possesses a magnificent sea view, and, by its situation near Saint’s Bay, deserves the attention of gentry and others.

The Ménard-Dorians were occupying it in 1893. At some time they bought it, probably in 1892. In 1893 Aline Ménard-Dorian hosted there one of her closest Parisian friends, the sculptor Auguste Rodin, for a couple of weeks, with his companions, the artist Emile Carrière and the critic Gustave Geffroy. They visited Hauteville House, as the Visitors’ Book ('livre d'or') for that year has their signatures.

Rodin had been working on a statue of Hugo for years. The statue depicts Hugo on the rocks of Guernsey, and Rodin wanted to take a look for himself at the island of exile which so inspired his hero. A set of photographs taken at La Marcherie show Rodin reclining on the cliffs, standing on the edge looking out to sea, and messing about with his friends and the Ménard-Dorian household. The following year his former partner, the supremely talented sculptor Camille Claudel, also came to stay at the Marcherie, and produced a statue that is said to be of Georges Hugo.

La Marcherie was celebrated for being a haunted house: a sinister crying sound could sometimes be heard there, and this was said to be the ghost of a little girl who had fallen down the well and drowned. The sound was no doubt produced by some sort of souffleur or underground cave in the cliffs below.

Georges Hugo had many interesting friends, including the author and journalist Marcel Schwob, a great friend of Marcel Proust (and uncle of Jersey resident Claude Cahun), and Caran d’Ache, the illustrator and cartoonist. They visited the island with him, staying first at Hauteville House (or at 'Friends'' at 20, Hauteville) and later at La Marcherie, and became well-known to a select section of Guernsey liberal society.  Léon Daudet had been many times to the island. Georges and Pauline had two children, Marie and Jean, but unfortunately they divorced, and in 1901 he married another member of the same family, close to him in age, Dora Dorian. Pauline married Hermann Paul. The rift was obvious:

Aline Ménard-Dorian still owned La Marcherie, however, and although she tried to sell it in 1903, it is possible that the family continued to visit during the summer as Pauline put her son Jean to school in Elizabeth College from 1907-1910; he later wrote of spending the most enjoyable Sundays of his life at La Marcherie. The photograph below shows Pauline with her son Jean as a young child ((c) Paris Musées, inv. No. 3555). Pauline and her mother did not always get on; towards the end of her life a quarrel with her daughter meant that Aline was deprived of the company of her favourite grandson, Jean Hugo, whom she had played a major part in bringing up. 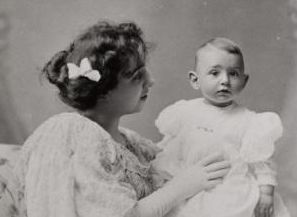 At some point the house was rented out and became a hotel. It was still in the possession of Hermann Paul, Pauline’s second husband, at the onset of WWII. The house was locked up by its tenant, Arthur Alwen, and put in the care of the official States Custodian, but on 22 June 1942 its fate was sealed. It was handed over to Organisation Todt and used to billet German soldiers. Although the official documents list ‘no trace of date of demolition’, it is very likely to have been demolished in 1944 along with Victor Hugo’s ‘Haunted House’ at Pleinmont and other buildings near cliffs and coasts. It was claimed that the German soldiers were frightened of the ghost and did not want to stay there, but these iconic buildings were probably destroyed partly out of retaliation for an Allied attack that took place in 1944, and partly to remove any remaining landmarks that could help the enemy.  The OT carted away the magnificent and prized blue granite and used it for their own building projects, including, apparently, the German cemetery at Le Baugy off the Jerbourg Road.

In all 300 buildings were demolished during the War. In 1947 Madame Paul’s husband claimed reparations for his loss. In fact, he wanted to rebuild the house, but in May 1951 his request was refused by the Natural Beauties Committee. In 1939 the house had been worth £1500. Mr Alwen also wanted to claim £448.19.4 for his furniture and business equipment. He stated: ‘As La Marcherie is now non-existent the compensation if any would assist me to reopen ‘Les Maréchaux’ Guest House in the Grange.’

Hermann Paul was allowed to build a bungalow in La Marette Lane in St Martin instead.

² Later of Emile Zola in particular.

³ Naumont, op. cit. Léon Daudet would later fall out with Aline; he christened her salon 'Picquart's Fortress' (Picquart was the whistleblower involved in the Dreyfus Affair, who was forced to resign from the military and was himself falsely accused and charged with forgery; the exoneration of Dreyfus also exonerated him, and he was restored to his full military rank).