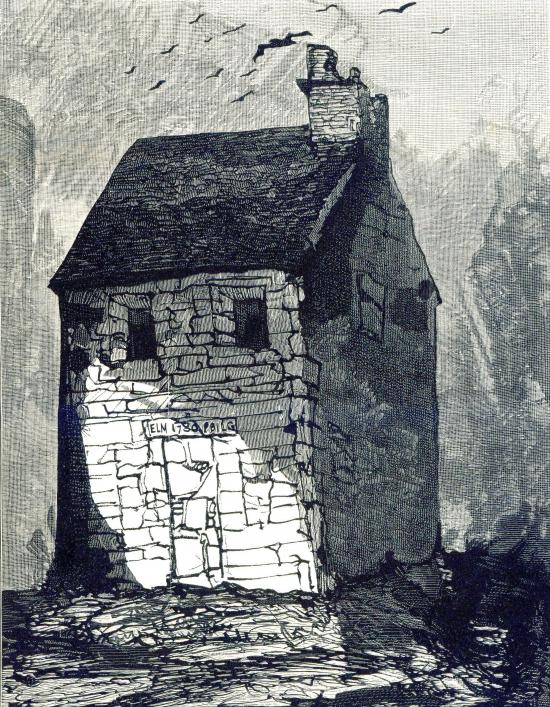 La maison visionnée of The Toilers of the sea, and one of Hugo's favourite places to visit. Although only a few stones remain in situ, the lintel from the house is now in the Candie Museum. [By Dinah Bott]

In 1780 the old watch house at Pleinmont was rebuilt and enlarged by the States. The construction was overseen by Eléazar Le Marchant and the Torteval Constables, and included wooden benches. In 1850 redundant military buildings were handed over by the States to the UK Government. While the majority of them returned to States’ hands in 1908, the old watch house at Pleinmont was retained by the Government as a semaphore station. By this time the dilapidated building was a tourist attraction, having been immortalized by Victor Hugo, who took great pleasure in visiting it on his frequent coach drives. He called it ‘The Haunted House’ in his Guernsey novel of 1866, The Toilers of the sea, and created an arresting image of it in watercolour for his personal copy of the manuscript. For Hugo it was the haunt of smugglers, whose nefarious night-time activities led terrified observers to believe that ghosts and demons were at work there.

It had always been used as a landmark for navigation, and was as such demolished by the German occupying forces. The Library has an excellent photograph of it from c 1895, in which it looks very much like Hugo's drawing. Dr Corbin, interviewed in 1902, remarked that the watch house was by then already a ruin.¹ It was redeveloped in the early 20th century as a telegraph station. Pierre Cressard, in 'Victor Hugo Guernesiais' in L'Ouest Claire has this caption under a photograph of the by then unrecognisable building: