All around the coast, the marine herb or algae called vraic is very plentiful. This sea-weed, which is used both as fuel and manure, is of the greatest value to the farmers, and of the utmost importance to the poor fishermen, who, being unable to afford coal or wood for the winter, depend upon this for firing, and sell the ashes for manure; about twenty bushels are required for one vergee of land.

There are two kinds of vraic; the vraic scié, so called from being cut from the rock with a small reaping-hook; and the vraic venant, being washed on the coast and gathered after every spring-tide, particularly if the weather be stormy. So important is this article in the island, that certain restrictions specified in the ordinances of the Court are laid upon the time and manner of its appropriation.

Poor persons who possess neither horse nor cart are allowed to cut it during the first eight days of the spring tide after Easter, provided they carry it on their backs to the beach.

The manner of cutting and gathering this product is worth noticing. On the morning of the appointed days hundreds of countrypeople asssemble from all parts, two or three families joining company, some with carts and some with horses, having panniers slung each side of them; they proceed to the beach, and as the tide ebbs, they scatter themselves over the bays, the most active on foot, or on horseback, wading to the rocks as far out as possible—some going in boats to detached rocks, even at a great distance, and being all armed with small billhooks, they cut away as fast as possible, sending it off in boat-loads to the beach, where it is deposited in heaps, upon which a smooth stone is laid, having the initials of the owner chalked upon it. 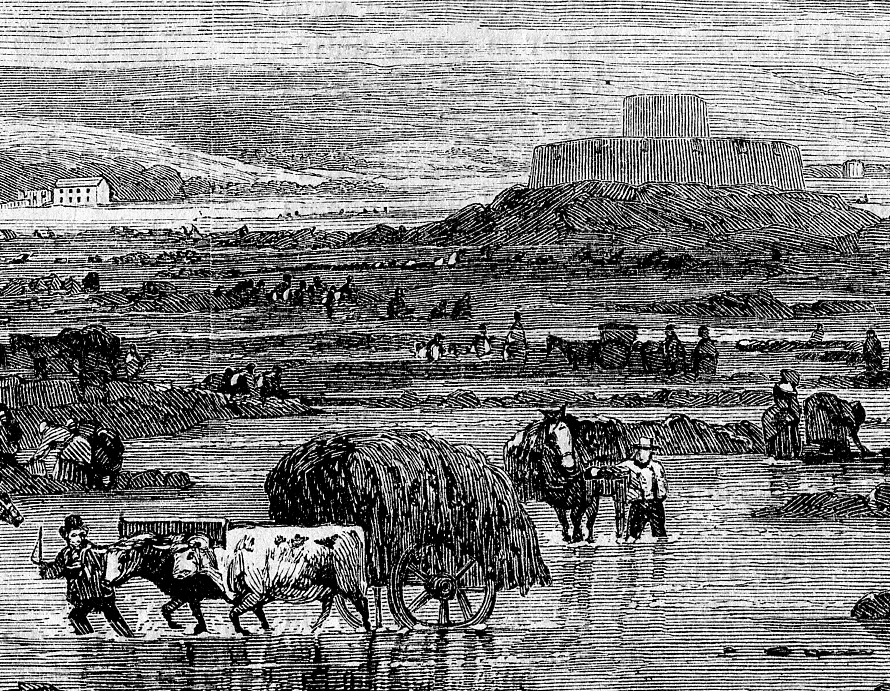 The scene is such a merry one that the stranger will be repaid for a walk or a ride to either of these bays on a vraicing day: the odd costumes of both men and women, with trousers and petticoats tucked up for greater freedom of limb; the varied dress of the younger ones, who turn out on this occasion with as much delight as on a holiday; those who cannot cut vraic being employed in carrying it; whilst most of the women gather ormers, crabs, and limpets in such prodigious quantities that the market is always overstocked with them on these occasions. It is most amusing to watch these vraicers—the gallantry of the young farmers, who pause in their labour to assist some favourite maiden in turning over a large stone, under which she is sure that there must be a quantity of ormers—the scrambling in shallow pools for some unlucky crab, who has incautiously left his hiding place—the many falls over slippery seaweed, and the peals of laughter which resound on all sides. Here a group of merry children with their broken knives hitting off the limpets (called in their Guernsey dialect, 'des flies'), and filling the basket slung across their shoulders, each one trying to collect the greatest number, and every now and then tempted to give chase to a fine loach or cabot, which darts across the pond in utter dismay at the commotion in his quiet home. There a still noisier group of grown-up children, hindering one another with rustic coquetry, and called to order by some gruff voice in the distance, which sets them all at work again in a minute.

At the close of the day, when the tide has risen to its height, and the retreating labourers are fairly beaten back to the sandy beach, the younger ones conclude the business by a general bathing; and a whole string of twenty or more, men and women alternately, each securing the hand he loves best, march into the water as far as they can, and duck each other heartily; splashing, tumbling, screaming, laughing, and then go home thoroughly soaked, but as light-hearted as they are heavy-footed, to enjoy a plentiful supper of shell-fish, fried ormers and boiled limpets, which are very excellent eating for those who have good digestions.

The 'vraic venant' is not gathered in the same manner; it is mostly done in rough weather, when the boisterous waves having torn it from the rocks, it is cast upon the beach, and the men send out immense rakes, with which they drag the vraic on shore, beyond the reach of the sea. This employment is the most laborious, from the weight and strain of heavy rakes; and not without some danger, as they are often wrenched from their hands, and brought violently back against the legs of the men, who thus risk broken limbs as the shingles, dragged by the tide from beneath their feet, cause many tumbles and drenchings.

It has been ascertained that nearly 24,000 loads of vraic venant, each worth two shillings, when taken at the beach, and about 1200 loads of vraic scié, each worth twelve shillings, are yearly collected on this coast, the value of which may be stated in round numbers at about £3000 sterling. This vraic is the chief manure used in the island, except at St Sampson's, where they import chalk for the low marshy grounds.

Both in Alderney, and on some parts of this coast, a sea-weed is collected, which is equal in virtue to the celebrated Icelandic moss, and used in the same manner for invalids. The algae of Sark afford a substitute for horse-hair of the finest quality.