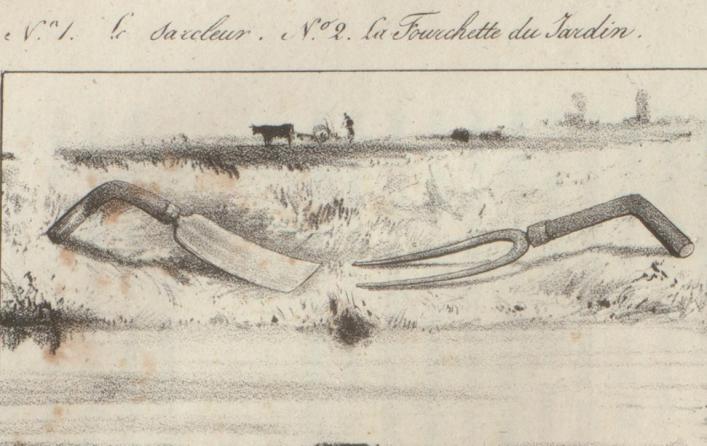 From Frank Feather Dally's 1860 Essay on the Agriculture of the Channel Islands, Channel Islands pamphlets X, in the Library. The sarcloir, or sarcleur. The illustration is from Jacob's Annals, 1830.

The weeding, key-stone of this culture [of parsnips], must be as closely attended to as that of onions, the first weeding taking place as soon as the third leaf is formed; the thinning must also be closely attended to, nine inches between the plants being a good distance; two more weedings take place; the cost of weeding for the season being here, where labour is dear, from forty to fifty shillings the acre. This is done in Jersey, (where the hoe is frequently used in lieu of the more certain but much more costly way of hand-weeding and thinning,) by women on their knees, who use small weeding forks, and deposit the weeds in baskets which they carry with them. In Guernsey, the tool commonly employed is termed a sarcloir; it is formed of iron from four to five inches wide at its edge, narrowing gradually, eight inches in length, and inserted not into a handle at right angles, but by means of a straight spike four inches long into a short wooden handle which is curved near the centre where grasped by the workman. When employed with weeding and thinning with it, he places one knee on the ground and attacks the weeds by pushing forward the sarcloir under their roots, turning them over, and with the flat side occasionally striking the roots, in order to disentangle the adhering mould. In this inconvenient attitude the labourer is enabled, by habit, to make greater progress than might be anticipated.

In Jersey, after the ploughing, or digging which is sometimes adopted, is completed, the field is once harrowed, and women then proceed with dibbles, where straight lines have been drawn with a rake, and set  beans in a row, at a distance of four inches from bean to bean, in four, three, and sometimes two ranks of beans, leaving intervals of from five to six feet between each of the rows—in many instances these are followed by children who drop into the same hole, after the bean, three or four peas; the parsnip seed is then sown. The beans usually appear in March, after weeding and thinning, which commences at the end of April or beginning of May, and is continued through June, if any blanks appear, some farmers, when weeding, fill these up with potato sets, others more frequently plant cabbages at intervals among the parsnips. In Guernsey, no such multifarious crops are found, but beans sometimes accompany parsnips, and a few peas are frequently scattered after the parsnip sowing, the reason of which is, as alleged, that the slugs spare the parsnips when they begin to vegetate, preferring the sweetness of the peas; of these, a few occasionally ripen and are gathered.

The digging of the parsnip begins in the latter end of August and is given, leaf and root, to fattening oxen; and though not at full maturity it is thought to have fully as good an effect as when more grown. The regular digging season is in November and December, this work being now done with three-pronged forks, which have superseded the spade formerly used in Guernsey.