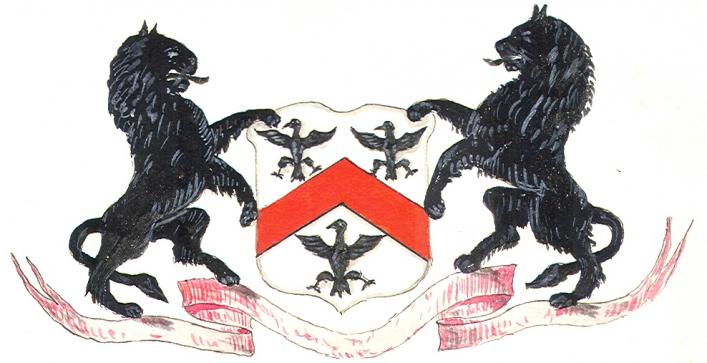 From the Lee MSS, Greffe, transcribed in Inquisitions post mortem &c, II, pp. 70 ff.; Blondel, who is based in London, sells his wife's property in Jersey and Guernsey to Pierre Priaulx and assigns power of attorney in Guernsey to Noel Lihou. The Blondel coat-of-arms is from a collection of watercolours at the Library.

In the name of God Amen. By this present publicque Instrument to all people be it evident knowen that in the yere of our Lorde God from his Incarnation one thousand five hundredthe threescore and tenne and in the twelveth yere of the raigne of our souveraigne Lady Elizabeth by the grace of God Quene of England Ffrance and Ireland, Defender of the Faythe and of this month of August the fourthe daye, before one Thomas Short notary publique of the Quene's Maiestie's authoritie admytted and sworne and the wytnesses hereunder named Personally constituted and appeared the Discrete person William Blundell the sonne of Nicholas Blundell and Vyncent his wyfe deceased while he lyved of the Isle of Garnesey under the Domynyon of the Quenes Majestie and cousin unto Emmett Blundell, daughter of James Blundell and late wyfe of Ellier Gosselin deceased and cusson unto the said Nicollas Blundell, father unto the said constituent, who not by strength, feare, deceyte or any subtill wayes or meanes Induced seduced circumvented or constrayned, but of his own means and free will for and in consideration of a certeyn somme of lawfull money of England to him by Peter Priaulx of the Isle of Guernesey aforesaide merchaunte contented and paide whereof and wherever he knowlegeth himself satisfied contented and paid and theareof and of every parte and parcell theareof clearly acquyteth and dischargeth the saide Peter Priaulx his executor and admynystrator.

By this [party?] hath bargaynede sold gyven and graunted and by this party dothe bargayne sell and gyve and graunte unto the saide Peter Priaulx all and singular [sorte and [illegible] lande and ten[ements?] Immoveable possessions and inheritances whatsoever together with the Issues proffits and commodities thereby comynge and growinge and to him due or to be due and belonging or which hereafter maye, shall, should or of right ought to descend and come unto the saide William Blundell, constituent, by or after the decease of the foresaid Emmett by any wayes or means whatsoever and wheresoever those same are seytuate lyinge or beinge as well within the foresaid Isle of Guernesey and also in the Isle of Jearsey or either of them. To have and to holde occupie use possesse and enjoye the aforesaid possessions and enherytannces together with the Issues proffits and commodities and growinge to the said Peter Priaulx his heires and assignes for ever by the service and customs of the saide Isle due and accustommed and the foresaide William Blundell hath promysed do and dothe promyse of theis party for him self his heirs and assignes to warrant and defende all the said lands and heredytements whatsoever unto the saide Peter Priaulx his heires and assignes against all people for ever of thies party and further the saide William Blundell doth give and graunte unto Noell Lyhou his full and absolute power and [acc-ie] into the premisses with the appurtenances before bargayned and sold and every parte theareof to enter into possession theareof to take to the use and behest[?] of me the said William Blundell and the saide possession [he?] had taken receyved to delyver the same to the saide Peter Priaulx his heires or assignes for ever. And lykewyse for and in the name of the saide constituent yf nede be to appear before whatsoever Judges and Justices Councells and officers of whatsoever estate or degree they be within the saide Isle of Garnesey and this present sale to confyrme and ratefie and allowe and all end every other wrytinge Instruments and Documents whatsoever to stipulate make notifie Recognize acknowledge enseale and Delyver as his Deeds with all and singular clauses penalties obligacions Renuncyacions and warranties in the behalf requysite and necessarye and the saide William Blundell by his othe made uppon the holye Evangeliste of God on the presence of me the said Notarye and the wytnesses hereunder named hath promysed to holde firme and stable under the payne and penalties of all and singular the goodes moveables and ymoveable presente and to come and at no tyme to call backe or disanull or go agaynste the remisses off the which premisses the said consituent requyred me the saide Notary to make him an Instrument publique one or two under one tenor[?] This act weare done in London in the house of me the saide Notary seytuate in the parishe of Sayncte Nicholas Acons in Lombarde Streete within the Cyttie of London then and theare beinge present the discrete persons Eliot Merchaunt joyner and Clement de Vyke clothworker Cyttezins of London wytnesses to the premisses called and Required. [Details of notary, seal, confirmation by Mayor 1570 &c.]

See also a contract of 1579, in Mariage encombré.

From Edith Carey's annotated copy of Guille of the Rohais and St George, p. 4, in the Guille family file at the Library: 'James Guille son of Nicholas (Bailiff c. 1510-1537) married 1st, Colette de la Court daughter of Thomas [this seems to be supposition], by whom he had 9 children; and 2nd, 1518/9, Marie Perrin, daughter of Dominique, by whom he had a daughter, Philipote Guille. She married Nicholas de la Court son of Thomas in 1537. (This appears from a contract of 28 September 1570.) They had sons John and Hellier de la Court; their daughter Colette de la Court married Guillaume Blondel son of Nicholas. (Letter under seal Guernsey 1570 (Andros MSS.)) [13 May 1531, Olyver Le Feyvre (of Castel) son of James in right of his mother, daughter of Dominque Perrin. MSS Sir Stafford Carey.] James Guille's inheritance was divided 26th November 1539 between ten children, 'of which the two youngest sons and the three youngest daughters were minors.' 'Due on the grande maison which belonged to Thomas Fouaschin son of Nicholas on the Grande Rue.' In 1552 Nicolas de la Court accused his wife of 'criminal conversation', i.e. adultery, with Cyprien Le Roy, who was also, claimed Nicolas, a wizard, a poisoner and a thief. ['Crim con' entailed damages.] His second wife was Collette Le Mesurier, daughter of Collas.