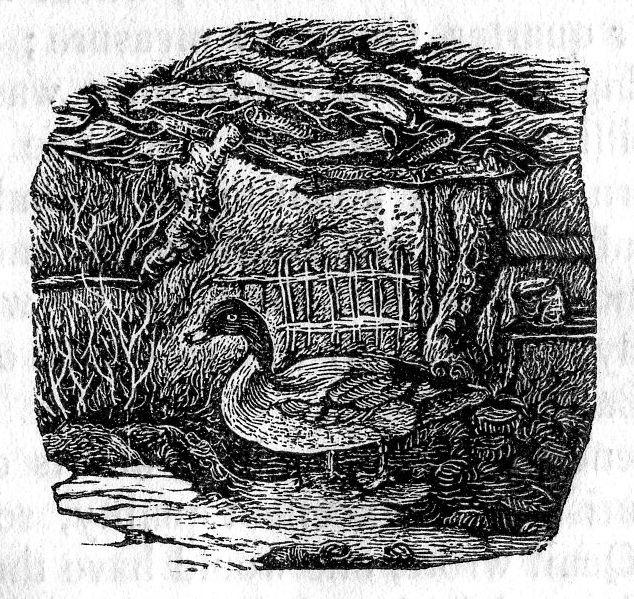 Les Landes, in the Clos du Valle, was at one time common land; it was low, swampy ground, partly covered by water in winter, and on it were kept large flocks of geese by those living close at hand. The presence of geese in large numbers caused the town people (who were in the habit of coming there in the latter part of the summer in parties to gather camomile) to call it the ‘Goose Common.’ (It was sold and enclosed in 1864.)¹

On the left-hand side of the main road going towards the Golf Club on L’Ancresse Common is a low-thatched cottage, in which there resided formerly a man by the name of Benez (according to the Livre de perchage du Fief St Michel au clos du Valle for 1754 the house was in possession of a family of that name.)² This man Benez, it was said, could transform himself into either a duck or a cat.³ He was a fisherman by trade, his partner being a young man named Jacques Rihoy, a neighbour, who in his leisure was fond of going out with his gun. At the back of Benez’s house was a large pond, known as Le Clos au Jonc, where rush and reed grew in abundance, a favourite spot for wild ducks. Jacques Rihoy noticed one morning in the pond a large drake not very far off. Taking steady aim he fired, but the duck flew away quietly to his great astonishment, for he was sure that the shot had struck the duck. That same afternoon, while in the boat, Benez asked his partner what luck he had had that morning. Jacques told his tale and was laughed at. Next morning the duck was in the pond, and Jacques, who had taken great care in loading his gun, fired at it again, but with the same result, the bird flying over his head crying ‘quack, quack.’ Again when in the boat Jacques was jeered at by Benez, who said that the duck would cease to be frightened of him. From this Jacques began to suspect that the old fellow had some hand in the mystery, and that he determined to find out as soon as possible. On reaching him that night he took a silver coin from his money-bag (de son pid d’cauche) and chiselled it into pieces to use as shot. Next morning as he loaded his gun he said, ‘Now I shall see what the old fellow will have to say.’ When he came to the pond the drake was disporting himself as before. Jacques, creeping cautiously as close as he could, fired. At that moment the drake gave a human cry, which frightened the sportsman, and swam towards the rushes where he disappeared. Jacques hunted for his quarry everywhere, but had to go home disappointed. Later in the day when the time came to go out with the boat, Jacques called for his partner and found him lying in great agony on the green-bed. He asked what was the matter, on which the old man replied, ‘You will have to it go to the crab-pots by yourself today. I have had an accident this morning and my arm is broken.’ This proved to Jacques that Benez was none other than the transformed duck.

It is recorded that wizards or witches who have the power to transform themselves into animals or birds cannot see the misfortunes which are in store for them.

On another occasion Benez found himself in a quandary; he was returning before daybreak, after a heavy thunderstorm, from ‘Le Sabbat du Caquiauro’ in the form of a black cat. He had passed Les Hautgards and was coming down la Rue du Corduval when he saw that part of Les Landes, at the bottom of the road, was under water. Even the stepping stones known as Le Pont Sous Bré were covered. As a cat his dread of water prevented his crossing, and he did not know what to do. On looking around he saw a flock of geese slumbering in the rushes at the edge of the water. He though to himself, ‘If I can get on the back of one of them he will be sure to swim towards his home.’ Having selected a large gander he jumped on its back. This so frightened the gander that it took to the water. The cat, setting its claws firmly into the bird’s neck said, ‘Nageons, navigons,’ (Paddle away and navigate) to which the gander replied, ‘Au Gyablle sait un pareille navigation,’ (to the devil with such a navigation!)

Having reached the opposite side of the pond, he got off and found his way home. From this and similar incidents that happened to Benez the saying arose, ‘Tu-est un malin Benez,’ which is used when an attempt at a practical joke is made, but failing, the perpetrator is exposed to derision.

³ The earliest example of the cat-disguise [of witches and of the Devil in Britain] is in the trial of certain Guernsey witches in 1563, when Martin Tulouff confessed:

[About three months ago I met up with the old lady called Collenette Gascoing in the Rue de la Fosse au Coully, and there were five or six cats there, one of them was black and was leading the dance, and Collenette told me that I should kiss the cat and it would stand up on its hind legs; Collenette kissed its behind, I kissed its flank. My[?] mother Francoise Lenouff was there, and Colette Salmon, the wife of Collas Duport, who was at the front, and they all knelt in front of the Cat and adored it and pledged their faith to it, and the old lady told me the cat was the devil.]

The Fosse au Courly is [was] a field in the Beaucamps, Castel [Lenfestey, H J, Guernsey Place Names, 2014.]