The works of Ralph Durand 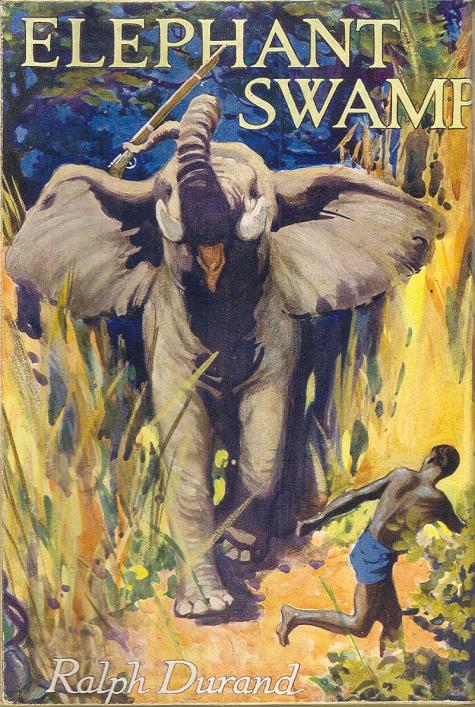 Ralph Durand, author and explorer, was Librarian of the Priaulx Library from 1929-1945, and the curator of the Island Museum from 1938-45.

Ralph Durand spent his early life travelling; his ambition was to be a writer, and he greatly admired Kipling, whose career mirrored his own. Like Kipling, he left home at a young age and set out on his own. After a torrid few years in Australia, he journeyed to Africa, and Central Africa in particular became a lifelong interest. A member of the Royal African Society and the Royal Anthropological Institute, he wrote articles on the archaeology of early man and on the political and social problems of the continent. He also produced several novels, a couple of reference books, and many short stories, which were published in well-known general and detective magazines of the first half of the 20th century. His best-known works are an important concordance to Kipling's poetry and the official history of the Occupation of Guernsey during the Second War, Guernsey under German rule. 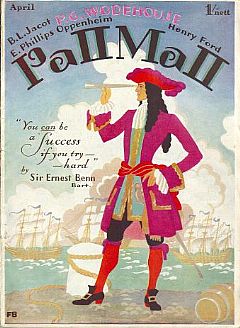 His colourful life is described in The Career of A Rolling Stone, an autobiographical article from the Pall Mall Gazette. This prestigious magazine published stories and serials from many famous contemporary authors.

Durand's first novel was John Temple, published by Macmillan in 1911. It is set in Mashonaland, part of Zimbabwe, and deals with the attempt by the King of Portugal in the 16th century to annex these lands, rich in gold and minerals. Durand's wife's mother had been Eleanor Temple; the review from the Teacher's Times remarks "The beautiful character of the heroine .. is in a sense drawn from life, and the book is dedicated to the "dear lady" who unconsciously sat for her portrait." He kept a scrapbook of reviews of his work, which were by and large favourable.

John Temple, by Ralph Durand (Macmillan, 6s), would be a good gift-book for a boy at Christmas-time, but is by no means without interest for his elders, covering as it does some new ground as to subject, and being written in a pleasant, cutivated style. It is the story of a merchant-adventurer, convict, and conquistador. Every boy will not know what a conquistador is. Mr. Durand tells them what it is, and makes the adventures of his particular specimen as entertaining as may be. Francisco Barreto's attempt to establish a great Portuguese South African Empire is as romantic and wonderful, as the author justly claims, as any tale of the Spanish conquest of Mexico and Peru. The Evening Standard, 16 November 1911.

In 1914 Macmillan published Spacious Days, a second, similar novel set in the Elizabethan period, in which two adventurous sea captains battle for the hand of a girl by trying to be the first to claim an island in the Arctic on behalf of 'Muscovy' to please her father. She chooses someone else in the end, but through working together through their travails the men become great friends. Ralph Durand had personal experience of sailing in the Arctic Circle and reviewers seem to have enjoyed that aspect of the book in particular.

1920 he entered a competition run by Collins, the publisher, and won the second prize of £250 with The Mind Healer. The judges were Sir Arthur Quiller Couch, Mrs Belloc Lowndes, and Mr J D Beresford. The novel was published by Collins in the UK and Putnam in The United States.

Mr Ralph Durand, the winner of the second prize ... has gained his experiences in a rather more varied school. Having been by turns a stockman, a miner, a ploughman, a wharf labourer, a boundary rider, a South African trooper, her returned to England in 1902, with the avowed purpose of being a successful writer. He was just beginning to achieve his ambition when the late war intervened. Mr. Durand joined up at once, and after spending a good many weary months in the trenches, eventually found himself an inmate of Fowey hospital. He occupied his enforced leisure by writing a story of the Cornish coast, which he christened "The Mind Healer", thereby securing Messrs. Collins' cheque for £250, and the whole-hearted congratulations of his fellow patients.

Iin 1928, Durand was the author of the novels Set a Thief and Servants of the King. In 1936 he produced Elephant Swamp, published by Blackie with illustrations by Leo Bates. This is a semi-autobiographical contemporary 'boy's own' adventure story set in Central Africa.

As well as his novels, Durand wrote a number of short stories that were featured in well-known magazines of the day. The first we have on record was The Poisoned Town, published in 1918 in Cassell’s Magazine of Fiction. Rudyard Kipling's Kim was first serialized in this magazine; the character Raffles appeared first here, and contributors included Joseph Conrad and many other writers of contemporary fiction. Durand's detective stories are still appreciated by afficionados of the genre, particularly Artful Jane, published in Detective (one of the first pulp fiction magazines) in 1928.

Durand was also the author of two significant reference books, Oxford: its Buildings and Gardens, which was beautifully illustrated, published by Grant Richards in 1909, and A Handbook to the Poetry of Rudyard Kipling, Hodder & Stoughton, 1914. The Library's copy of the latter includes two letters from Kipling to Durand, which make it obvious that Kipling approved of the work and helped Durand prepare the concordance, and that relations between the two men were cordial. They also imply that their friendship was neither intimate nor of long standing; twenty years later Kipling visited Guernsey, however, and amongst his collected letters a note from him to Ralph Durand, written from the Royal Hotel, apologizes for 'having missed him at the Library.' The book is very highly regarded by Kipling scholars and was held up as a paragon for future authors.

Durand was commissioned as contributor to the Encyclopaedia Britannica and is believed to have travelled extensively as part of his employment. He also wrote factual articles for newspapers and magazines. In his scrapbook can be found published reports on his experiences as a military policeman in the Boer War, articles on trade and economics (his eponymous relative, Sir Ralph Durand, was a famous economist) along with his photographs of an abandoned Boer encampment, and articles on Africa, Java and India.

Assuredly no-one who has ever landed in Batavia would ever come away again were it not for a dreadful drawback - the impossibility of getting a decent bath. From the outside, the bathroom looks like a little storehouse daintily set amidst palm-trees in the middle of a courtyard. Inside it is a chilly, slimy dungeon, the floor a quarter of an inch deep in dirty water. It is evidently intended that we should dip a sponge in it; and anything more unsatisfactory it would be impossible to imagine. ... O Queen of the East Indies! land of light and colour without glare, warmth without heat, sensuous indolence and luscious fruit! if ever I hear that you possess a decent bathroom I will fly to you at once, and never, never leave you again. Chambers' Journal, April 1903. 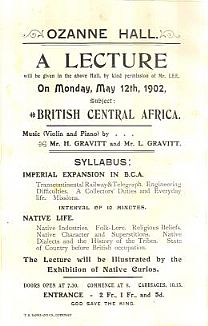 His knowedge of and interest in Africa led him to correspond with the politicians and civil servants of the day, taking the same humanitarian view as his grandfather, Montague Hawtrey, had taken on the Maoris; he pleaded that the Africans should be treated fairly but that their culture and customs should be taken into account in the expectations of those who had imposed themselves upon them. His desire to understand and empathise, however, did lead him to defend those who treated the inhabitants of the Congo Free State so brutally, on the supposition that the climate and the general degradation of the inhabitants and their conquerors led to the brutalization of both European and African officals, who were therefore not responsible for their actions. This may or may not have been true, but it attracted controversy, and he wrote several times to Edmund Morel (1873-1924), the founder of the African Mail, who later became an MP, and who had a particular philanthropic interest in the Congo.

Ralph was appointed Librarian at the Priaulx Library in 1929. When the Island Museum was created in 1938 by the amalgamation of the two main collections in the island and housed in the Church of St Barnabas in St Peter Port, he was also asked to be curator. In that year he gave a talk about the history of the museum and his curatorial philosophy, a transcript of which was published in the Report and Transactions of the Société Guernesiaise. During the Second War, he remained in office at the Library and was asked by the Bailiff to act as official historian of the Occupation [Ralph Durand appointed official Island historian: 11th July 1940 (Guernsey Press Diary), p. 6]. He produced his account of the war years, Guernsey under German Rule, but he died on 22 December 1945, and so did not live to see it published in 1946. In the following quotation he speaks from personal experience:

On several occasions German officers told Islanders on whom they were billeted that the troops would lay down their arms by a specified date.The first date mentioned was Christmas, 1941.Later dates were subsequently given but as time wore on the prophecies were not renewed.Such statements were eagerly and widely circulated by members of the “Guernsey Underground News Service”.Some of them may have been invented.Some were undoubtedly authentic.At any rate it was evident that the German people were by no means unanimous in ther loyalty to Hitler. Less bombastic but more convincing was the evidence afforded by an officer who sought an interview with the author of a recently published book, Guernsey Present and Past [i.e., R. Durand], on the ground that he wished to ask some questions about the history of the island.When they met, however, he showed no interest whatever in the island’s history.Instead of asking questions he described the principal events in the growth of Nazi power to which he applied the words “this terrible tragedy”. At first this officer was listened to somewhat coldly lest he should be in reality an agent provocateur, but there was unmistakably genuine emotion in his voice and face when he spoke of friends driven into exile or incarcerated in concentration camps and it became obvious that he had sought the interview solely in order to unburden his mind to someone whom he had hoped would prove sympathetic.

Ralph Durand neglects to mention here, however, that he actively collaborated with the authors of G.U.N.S. (Guernsey Underground News Service); at great personal risk (particularly since he was under threat of deportation by virtue of his being UK-born) he would place a copy of the propaganda newsheet every day in a pre-arranged book in the Priaulx Library. The Library has examples of the newsheets, typed onto tissue-thin tomato paper.

The Elephant Swamp, a semi-biographical adventure novel for boys

A Handbook to the Poetry of Rudyard Kipling.London: Hodder & Stoughton, 1914

Guernsey, Past and Present. Guernsey: The Guernsey Press Co., 1933

General Militia Orders, during the Latter part of the French Revolutionary Wars and the Napoleonic Campaigns,Transactions of the Société Guernésiaise 12 (2), 1934, p. 142

Some notes on the life and services of Major-General John Gaspard Le Marchant, Transactions of the Société Guernésiaise 12 (4), 1936, p. 491

SHORT STORIES (see notes): (* indicates the Library has the manuscript or typescript)

*The End of The Race, typescript

*The Cave of the Black Cardinal, typescript

*The Genius of the Never-Never Land, typescript, Allens, Plaxtol, Kent

If you wish to view any of these materials or find out more, please contact a librarian.