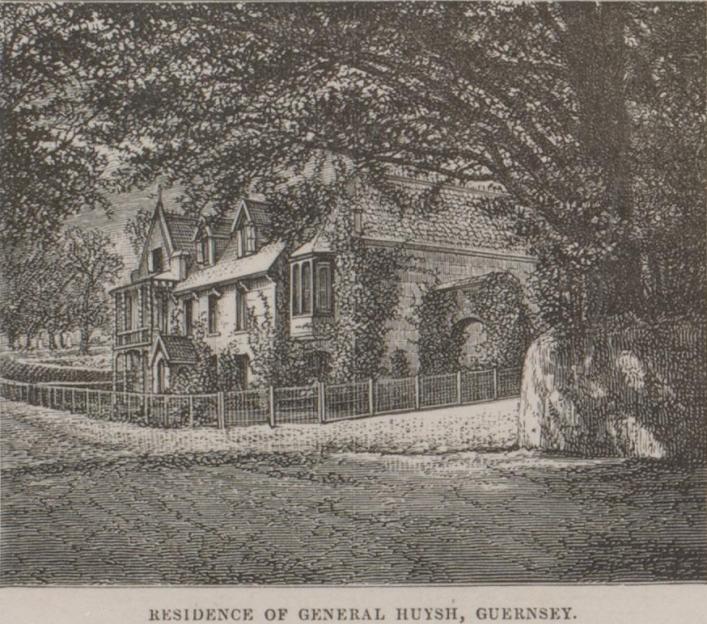 A report of a meeting of the Société Guernesiaise in c. 1927. Rosa Brock's house 'Rosenheim,' now known as 'The Chain House,' was a very popular stop on a typical visitor tour of Guernsey, for its highly decorative gardens. The photograph below, from the Library collection, shows the famous 'sun and moon' trough in situ in the gardens. The Library is lucky enough to hold Rosa's exquisite book of watercolours.

There was a large gathering, many of whom went out by the usual bus from the Town Church, while car owners met at Rosenheim, St Andrew's. Here Mr Warren [J P] read a paper, much of which had been from the pen of Miss Edith Carey, who was unable to be present. While she vainly awaited the fog-bound journalists at the Greffe last Wednesday, she copied out a contract relative to the sale of Rosenheim. A pedigree of the Brock family showed a link with that house. Rosa, daughter of John Savery Brock, born in September 1812, married the Reverend W[illiam] M[aule] Barnes, and apparently they bought une maison et vergée de terre faisant partie du courtil appeli Les Carriaux et située en la paroisse de St Andre sur le Fief de la Rue Frairie, from Dunière Sheppard. This deed shows, Miss Carey thinks, that the original house had no name and was in the field of Les Carriaux. Rosa Barnes married for the second time General George Huyshe, CB, who died in 1881.

Mrs Huyshe was among the first to realise and appreciate the fascination of old Guernsey architecture and relics of the past, and the Société were interested in the old archways1 [there were said to be 20] acquired by her from various parts of the Island and re-erected in the garden. Little is known of the history of these arches because Mrs Huyshe left so vast a number of letters and papers that it was considered at the time of her death, on April 3, 1892, utterly impossible to preserve them—and so they were all destroyed. 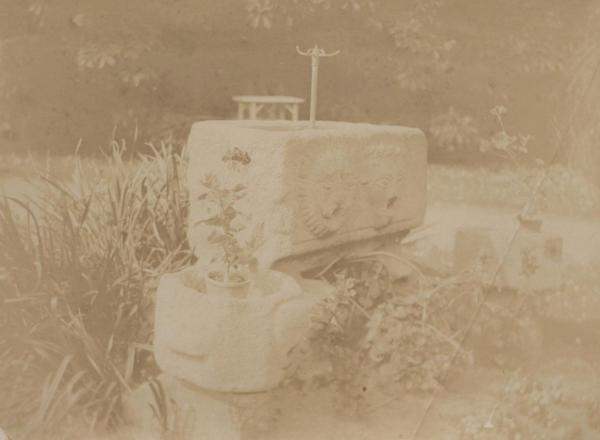 Supporting a summer house is a very fine specimen of an old granite mantelpiece brought from the old house at Les Grandes Maisons;2 an ancient carved granite trough, with the sun and the moon on the face, which might date back to 600 BC, but Mr Warren was not prepared to give any date without much more investigation;3 a carved stone window let into an outbuilding came from Bon Air, St Saviour's; and in the hall, a very large and beautiful stone piscina4 brought from the ancient memorial chapel of St Blaise, which was situated immediately south of the archway just below Le Riche's shop in High Street, and was the chapel of Le Manoir Le Marchant. St Blaise is the recognised patron saint of woolcombers, and, as wool and knitting was the staple industry of the island, he was probably the Saint most frequently invoked. The earliest mention of this chapel is in a contract dated 1383 or 93, and at the Reformation it appears, with the other local ecclesiastical benefices, to have fallen into the hands of the King. On October 1, 1563, Queen Elizabeth's commissioners sold to Thomas Le Marchant, son of Nicholas, a chapel called 'La Chapelle ès Marchants,' otherwise La Chapelle St Blaise, for £3 sterling! Many of the walls of Rosenheim held fine specimens of majolicaware brought from Italy by Mrs Huyshe on her almost yearly visits to that country.

We have not attempted any description, or dwelt on any of the private estates, many of which are delightfully situated, but General Huyshe's gardens must form an exception, for he, with the greatest kindness, throws them open almost unreservedly six days of the week. In fact, he seems to enjoy the pleasure which visitors obtain from inspecting his grounds. Visitors, in large or small parties, are freely admitted without any cards; at times several vehicles may be seen drawn up outside the house, and during the day hundreds are shown over the grounds. The gardener, a very intelligent man, is in attendance, and he quite enters into his master's spirit. The beauty of the beds in the grounds; the delicious little arbour where water from a fountain plays over the rarest of ferns; the conservatories filled with the choicest plants, make the visit one of the most enjoyable and memorable sights of the island. To those who understand anything of horticulture, the visit will be unusually interesting, as the gardener will gladly supply information about the objects of his care, some of which are far removed from common cultivation. If the visit be made in summer, when the grapes are ripe, the houses will have additional attraction. [Benjamin Clarke, Tourist's Guide to the Channel Islands, pp. 97 ff.]

1 Rosenheim, under its later 20th-century appellation 'Pleneuf Court,' is No. 631 in McCormack's The Guernsey House, in which the collection of arches, ancient former doorways and gateways, is discussed but not reproduced. Some of the arches were removed to La Falaise in St Martin's (No. 144), see p. 138 and p. 197. One of the arches seems to have come from Les Galliennes in Torteval. 'John Le Messurier told me he pulled down the old house, and [sold] the archway to Mrs Huyshe, who put it up at Rosenheim, St. Andrew’s.' From Ray Le Mesurier-Foster's Rough Guide to the Le Mesurier family, no. 365. Here is the wit Amias C Andros on Rosenheim's garden, from The Star of January 25, 1881:

but I cannot pass Rosenheim. No, I cannot, for Rosenheim is an institution. Talk of Rosherville gardens as the place to spend a happy day, what is it compared to Rosenheim? Here, for one, we have Taste; here we have Art; here we have Beauty. Here, 'Arry, even, is allowed to roam the flowery parterres of this little Eden, and to wander at his own sweet will through the leafy groves and hot-houses where the training vine hangs over head, and the luscious peaches ripen on the wall. Here he can study heathern idols, Brock's Monument, antediluvian Guernsey sculpture, hydraulic ingenuities, modern ruins, religious tracts, botany, and garden architecture reduced to a Science. He can even wander through an arcade formed of contiguous real Norman Arches, erected in the grounds. No need to enter the house and revel in the treasures, the curiosities of art, brought from all parts of Europe; there are treasures enough outside without visiting Rome, Naples, Pompeii and Granada within.

2 McCormack also mentions this fireplace, by then inside the house.

3 T F Priaulx, in 'Rosenheim, St Andrew's,' Part I, Quarterly Review of the Guernsey Society XX (2) Summer 1964, pp. 27 ff., says that this trough is 'now outside the west door of the Câtel Church.' There is a photograph of it in QRGS XVI No. 3. It is now positioned to the south of the porch and is dated to the 16-17th centuries AD. Part I of the article outlines the history of the house and site from 1584, when it was owned by the Le Patourels (Le Pastourell). It includes mentions of the Robin, Robert, Lihou, Le Mesurier, Lenfestey, Dobrée, De Havilland, Agnew, Le Lacheur, De Garis, and Sheppard families, as well as Rosa Brock, William Barnes, and her second husband, General Huyshe. Part II is to be found in Vol. XX (3), pp. 66 ff. The transition of the trough from the garden of 'Pléneuf Court' to the churchyard is documented by H W De Sausmarez in the Report & Trans. Soc. Guernesiaise, 1934, pp. 130-1, with a photograph, and a report from the British Museum, which concludes that it is a rustic garden trough dating to the 16th-17th centuries.

In the Report & Transactions III (1895) of the Société Guernesiaise, the Secretary of the Archaeological Section, J James Carey, discussed a similar 'font:'

There is a curious old trough in the farm house called Les Fontaines, situated close to the Câtel Church, on the opposite or west side of the road. At the time I took this sketch, 1858, the farm belonged to our Guernsey poet, Mr. Lenfestey. The house was said to have been a convent, the nuns having a right of way to the church by a bridge over the road. The day I visited the house was on a Saturday. The trough was then used for holding buttermilk. No one seems to know when or how it came there, except that it belonged to the church and was supposed to have been used for baptisms. The drawing shows what is sculptured on the front or face of the trough. It is not an unusual thing to see mermaids illustrated in various ways, viz., as supporters to coats of arms, crests on houses, tombstones, on capitals of pillars in churches, &c, &c, but where did the sculptor who cut these mermaids get his design? If it was an original idea his brain must have had the same thought as his brother artist, a native of India. Look at the sketch before you of a mermaid cut on a stone I saw among the ruins of the old Fort of Richore in the Madras Presidency. This I saw about the year 1876. See how closely they resemble each other. Unfortunately, the Indian mermaid has lost her left arm, which I almost feel sure held the ring, or quoit, like the Guernsey mermaid. The trough in question is about 4 feet long, 2 feet high, and 2 feet broad, and I think is cut in granite. Look at the coloured drawing done before me by a native artist in the Nagpore City Bazaar. This mermaid is represented worshipping the seven-headed Naga or Serpent.

Another sketch represents a capital of a column in the Christian Church, near Brixham, Devon. The sketch in my book shows a double-tailed mermaid cut on a lozenge shaped stone on a house in the old Jewish quarter in the town of Newcastle-on-Tyne. The existence of mermaids is thoroughly believed in in Ireland and Scotland to this present hour.

4 The Lukis MSS, transcribed by Edith Carey, I, p. 75, has this to say about the piscina:

The old Post Office, which belonged to Mr D Watson, next to the arch of the Carrefour, was purchased by Mr Joshua Ahier and the present houses of Mr Warley and Madame Beghin were built upon the site, after giving a few feet of width to the street. In these changes there were portions of an older building discovered on the spot, and, in one of the walls, on the northern side, a very fine and elaborate piscina was found. It was sold, and now forms an interesting relic at the foot of the stairs in the passage of the house, or cottage orné, built at Rosenheim, St Andrew's, belonging to Mrs Huyshe.

The Library has a good photograph of the piscina built into a wall at Rosenheim. It was said by Mr A Carey, auctioneer, in 1935, at the auction of the house (then called Pleneuf Court) that the piscina 'dated to about 1380' and 'cost Mrs Huyshe £1,000' [Guernsey Press, January 1935.]