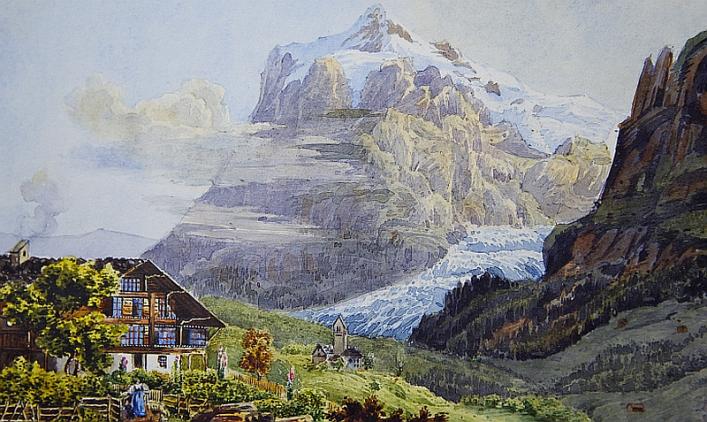 These lovely watercolours are the work of Rosa, the daughter of General Sir Isaac Brock's brother, Savery Brock. They have been given to the Library on long-term loan by Rosa's great-great-neice, Sally Greenaway of New Zealand.

Rosa was born in 1812. Twice married (she became Mrs Barnes then Mrs Huyshe), she was an antiquarian and collector in later life. So many papers and documents were found when she died in 1892, that, as the local historian Edith Carey noted resignedly, they were all burned rather than sort through them. The delicate and colourful works from her Sketchbook, and the book itself, bear no small resemblance to those from the hand of Rosa's cousin, Harriet. Harriet married Lieutenant Robert Pengelley and went out, somewhat reluctantly, to Canada to help him manage her uncles' estates there, only to die soon after her arrival. The cousins were of a similar age, and the date of many of these paintings of Rosa's, 1832-5, roughly corresponds with Harriet's marriage and departure from Guernsey.

Sally Greenaway, the owner of the sketchbook, suggests that two of the works, a pair of pen-and-ink sketches of street life in Oporto, could be the work of Rosa's father Savery, as they are dated 1808, when he was serving as amateur aide-de-camp to Sir John Moore in the Peninsular War. Many of the charming studies of Alpine views probably date from a European tour Rosa undertook aged 22, in 1833; others are dated around 1832-5. A lively painting of Pope Gregory XVI carried in procession can be dated post-1834, as he is wearing his favourite papal tiara, which he commissioned in that year. Rosa is said to have visited Italy almost yearly, in the newspaper piece concerning her chef chef d'oeuvre, her Guernsey house and gardens, Rosenheim.

The colours of these paintings remain extremely vivid. Rosa also left us around 10 views of St Peter Port, including Cow Lane, Fort Saumarez, and several of the Harbour and Castle.

The illustrations here are details from larger works. The watercolours have been digitised and may be viewed at the Library. Rosa and her sister Betsey are mentioned in Jane Barlow's diary.

'Mrs Huyshe of Rosenheim had a garden party. She was an eccentric, and on the tables among the plates of food was a pile of tracts with a notice, 'Please take one. It may do you good, and it cannot do you harm.' If you should say that one does not have piles of tracts at a garden party, I should only answer that at Mrs Huyshe's parties one did. Colonel C J Durand [a notorious practical joker] took the notice and tied it onto a very well-laden peach tree.'

There was a peach tree on the property which grew from 600 to 800 peaches every year.  Some 40 years ago Mrs Huyshe had a box of tracts in her hall with the notice 'Take one.' A now legal luminary of Guernsey, who visited the house, took the notice and pinned it on the peach tree, then in full bearing. Next morning the peaches were all gone, and the tract box was still full!

This winter (1892) has been a sad and mournful one, to high and low, and just as cold dark days are giving place to spring, Guernsey has to mourn another cherished name. An old institution is gone from us in the person of Mrs Huyshe, who leaves a void which will not be easily filled, or rather, which will never be filled.

Mrs Huyshe, née Rosa Brock, was the second daughter of Savery Brock, Esq., and Eliza de Jersey, of Sainte Hélène, his wife. She was niece of Major-General Sir Isaac Brock, KB, and Daniel de Lisle Brock, Esq., Bailiff of Guernsey, and inherited the strong, vigorous understanding and upright character of her family. She married first the Rev. William Maule Barnes, by whom she had a daughter who died very young, and whom, as also Mr Barnes, she laid to rest by the blue waters of the Mediterranean. She married again, about 1862, General Huyshe, CB, with whom she lived for nearly 20 years, at Rosenheim, in St Andrew's parish, and whom she has survived over ten years. Rosenheim has been for so many years the centre of such genial hospitality, that it is difficult for those who have often participated in it, to believe that it is over for ever, that we shall never hear again that kindly welcome, and see the well-known face among her flowers, gathering the choicest roses or camellias, and the most favoured peaches and nectarines for some favoured visitor, some young bride, or some sufferer who could not leave the sick room.

How many distinguished guests have written their names in her vistors' book. The Duke of Connaught who had been associated in the Rifle Brigade with her step-son, Captain Huyshe, called at Rosenheim—so, in much later days, did Prince Henry of Battenburg—so did Prince Blucher, and many others.

Nothing perhaps gave her greater pleasure in this last year of her life than when she received Sir Lintorn Simmons, whom she had known as a boy, and he came up to her with a warm hand-shake, 'How are you, Rosa Brock?'

Her charities were large and unostentatious, and many will have cause to miss her. Others are kind, and benevolent, and hospitable, but Mrs Huyshe had a charm of her own, a special individuality, which we shall long look for in vain. Absolutely unconventional, true and sincere like crystal, seeing the romantic, where others see only the prosaic side of life, where shall we find all these qualities combined in another?

The summer is coming, and flowers will be luxuriant in her beautiful orchard houses and gardens, but the mistress of Rosenheim will never again see her roses bloom, and very true and genuine is the mourning among all who knew her.

The late Mrs Huyshe's well-known pony was taken across to Herm yesterday, where it is destined for the use of Prince Blucher's little boy. [Both extracts from the Library's Brock family files.]