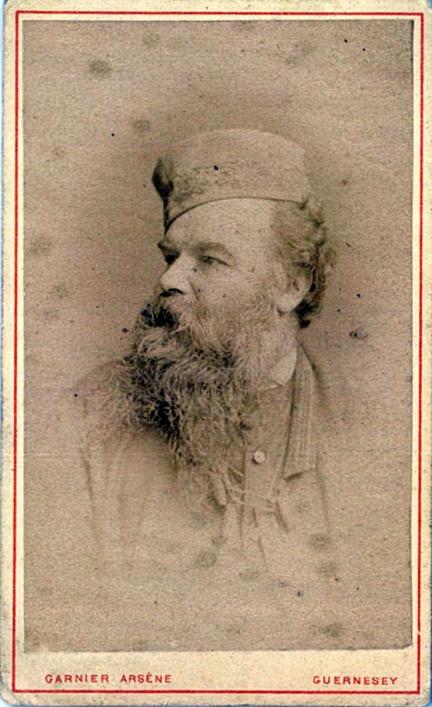 Arsène Garnier was born in Cresnays in 1822. He became interested in photography while at college in Avranches, moving to England and then Belgium in order to pursue it as a career, even inventing a process for colour photography. In 1848 he set up a studio in Guernsey. He had married a French woman whose family farmed a substantial holding in St Andrew’s, Julia Hallier, by whom he had two daughters born in Guernsey; Marie, born 1850, and Hélène, born 1852.

By 1861 he seems to have been living apart from his wife. Living at his house was a French dancing teacher and artist, Marie Plessy, with whom he seems to have some sort of long-term relationship (she may have been his sister, as his first daughter’s godmother was Marie Jacqueline Garnier); his daughter Marie also became a teacher of dancing and drawing.  Garnier was a book collector─ eventually coming to possess a library of 13,000 volumes, housed on the walls of his three-storey studio staircase.

In 1866, through the medium of their mutual friend Kesler, Hugo and had Garnier exchanged volumes, Garnier giving Hugo the much sought-after Latin-French dictionary by Du Cange, and Hugo giving the photographer a signed copy of les Misérables. In the same year he took a photrograph of the author. In March 1868 Garnier photographed the poor children in the garden. He presented a copy of one of his celebrated photographs of Victor Hugo in the Red Room at Hauteville House to Hugo himself, the dedication 'from a humble artiste to the greatest of poets' being written in Garnier's own rather handsome florid handwriting and dated April 1868. According to his memoirs, Garnier was then invited to meet Hugo socially in autumn 1868, the poet complimenting him on his wonderful book collection. The Hugo family was already fascinated by photography, and Garnier, probably Guernsey’s first professional photographer, became a frequent visitor, and in time the Hugo family’s main photographer.

His best friend of that time, Paul Stapfer, called him ‘habile artiste, joyeux compagnon.’ He gave Stapfer copies of the cartes de visite of the prettiest girls who had sat for him. His skills as a hypnotist were noted by Hugo. In May 1868 he mounted an exhibition of his photographs of the Hugo family and Hauteville House at his studio in the Grange, which proved very popular. His most famous photograph is that of Victor Hugo and the poor children attending lunch at Hauteville House.

Despite his quirky nature, his French nationality, and his great talent for photography and photographic science, Garnier, who had been resident in Guernsey since 1848, had never met Hugo before the mid-1860s. Why were two men who ought to have been friends not even acquaintances for so many years? The answer may lie in Garnier's Catholicism. He was very religious, and may have disapproved of Hugo's lifestyle. His antipathy to some of Hugo's beliefs was certainly discussed in Guernsey after he had left the island, but is not borne out in Garnier's own writings. Garnier was a great friend of Father Boone, and it is interesting to note that his first interaction with Hugo came about through the poor children.

Garnier returned to Normandy in 1872, leaving behind his wife and daughters. He built himself a house at Cuves, in which he displayed his books and photographs; he was known as ‘Garnier the Artist.’ In 1887 he was asked to deliver a lecture to a learned society at Avranches about his memories of Hugo, and this was later published as a pamphlet, Victor Hugo dans sa vie privée à Hauteville House, Guernesey, [The private life of Victor Hugo at Hauteville House.] After his death in1900 his extensive collections were sold at auction (his wife outlived him, his daughters did not); his valuable photographic plates were destroyed in an air raid in 1944.