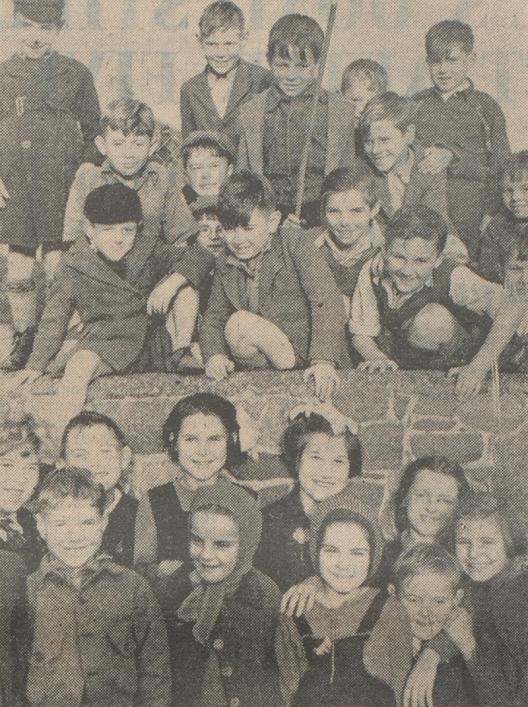 'Accident-free Guy Fawkes' Night was a brilliant success,' by Star Reporter, and 'St Saviour's procession raised 50 pounds,' from the same number of the Star.

It was a night of fires and big bangs. Fires everywhere were smouldering beyond midnight, and fireworks were being let off until a late hour, but Guernsey enjoyed an accident-free Guy Fawkes’ Night. The St John Ambulance Brigade remained on duty but was not called out. £50 was collected in the St Saviour’s Guy Fawkes’ procession, and close on £15 at Bordeaux in aid of the St John Ambulance Brigade of the North. 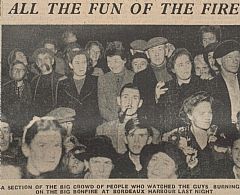 In a great blaze of flame, with fireworks shooting up into the sky over the sea on all sides, the Colorado beetle, mascot Guy Fawkes of the North, went up in fire with sixty other guys a Bordeaux Harbour last night. (Click to enlarge the picture of the crowd.)

Between 2,000 and 3,000 people came to watch the bonfire, which burnt until after ten o’clock. About ten pounds’ worth of fireworks of all varieties, squibs, crackers, wheels and rockets, shot up in to the sky until the district was bright with light.

The huge beetle which was burnt had been made by Miss Daphne Le Comte, and earlier yesterday had been inspected by the Colorado beetle inspector, Mr H Gilroy, who said that yes, it was a beetle, and would have to be destroyed. It was.

Those who helped Mr Harry Bowles to make the extra guys, which were then burnt, were Mr John Renouf and Mr John Dean. Mr Bowles told me: ’I think we may have burnt almost one hundred guys, but it is hard to keep count when you are pitching them into the fire, and they are brought in by the dozen. I would say there were twice as many people at the bonfire this year as last. Lines of cars stretched right up to the fort.’

For 16 miles the men of the West British Legion carried their guy in procession yesterday afternoon. In weird and wonderful garb, ranging from flannel pyjamas to a militia uniform of the 1880s, these men brought a spot of colour and excitement to Guernsey’s country and town life. 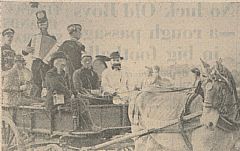 They started just after 1.30 pm, from their HQ at St Saviour’s British Legion Hall, and rode through the Castel to the North, along the Front to Town and home again. There was Osmond Sarre, who led the procession on horseback, dressed in an old black suit with plumes of pampas grass waving in his hat. Frank Roberts drove the decorated wagonette in which the guy, a dignified personage ion a bowler hat, rode. The ‘herald,’ Bill Brehaut, in a costume like a red and white draught board and a black face, rode with the guy. (Click photographs to enlarge.)

At frequent intervals the procession stopped, and Bill said his piece, a speech which I couldn’t hear because of the noise the hundreds of excited youngsters made. In the next van, driven by Clarence Le Cheminant, was the band, accordion and drum, played by the brothers C & J Vidamour. Bringing up the rear were half a dozen men on horseback, including the 1880 militiaman, a red Indian and a clown.Then, of course, there were the collectors, Reg and Brian Smith, Micky Jones, Bill Brehaut, Jnr., and others. They worked hard the whole afternoon, collected from the men in the fields, and even went in to a waiting bus, where the only passenger paid up with a smile.

I met the procession at the Longstore where hundreds of youngsters waited for them. One of them, Brian Green, got knocked down by a passing lorry before the procession came, but was not badly hurt. The men of the West had a triumphant ride into town, where I left them. Hundreds of people lined the route and the collectors were busy. 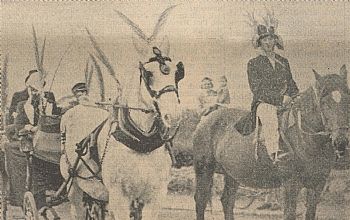 The pace set by the procession was a fast one, and Walter Fallaize, with a black face and flannel pyjamas, rode back and forth on his motor-bike picking up the collectors. Mr C J Le Cras, organiser of the procession—‘If it had not been for him, there would not have been a show’, I was told—said that everything had gone well. Crowds had greeted them by the North Cinema and at St Sampson’s. ‘It’s an all-day job,’ he told me. ‘The West British Legion depend on this show for a lot of their funds.’

The guy went up in flames to the accompaniment of fireworks and music in a field adjoining the British Legion Hall, St Saviour’s, and some 300 onlookers saw his doom. This was followed by a dance, attended by nearly 200 dancers. Mr Osmond Sarre was the MC. During the evening Mr CJ Le Cras announced that the amount contributed during the procession was £50, inclusive of the dance. As expenses were so small, practically the whole of that sum was available for the Western Branch of the British Legion.

There is a 1935 photograph of a similar procession in St Saviour's in Guernsey's Forgotten Past, by Carel Toms (No. 54), in the Library, and one from St Andrew's in the late 19th century in his Guernsey: Pictures from the Past, No. 128, in which the costumes closely resemble photographs dating from 1900.