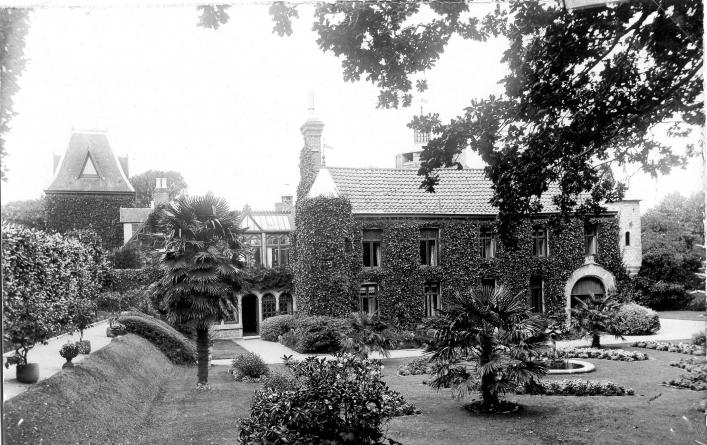 From the Lukis MSS

(Click on the image above to enlarge it; the photograph is in the Library collection.)

The old estate of La Haie du Puits¹ has greatly changed in appearance through the various alterations in the house and the buildings adjoining. The public road, which passed under the Eastern side of the dwelling—where the gothic arch and Warders turret now stand—was no better than a common country road, and a stream constantly ran down it from a long square pond or reservoir which had been made to receive the drainage from the valley of the Beaucamps, which lies south of the Estate. The house then formed three sides of a square, and the basement rooms were so low beneath the basse cour that Mr Le Marchant made very great alterations in all those on the ground floor. The new military roads, however, made a very great change in the arrangements, the wet road was drained, the pond removed, the house became detached from the foreground, and shrubberies nearly obscured the old mansion from the public view. A new arch of red granite, erected by the present owner, has given an entirely new feature to the whole domain. Mr John Thomas² was a very gentlemanly, well educated man, but his alliance with the Le Marchant family was not without some bitter ingredients in the cup of matrimony. Respected as he deservedly was by every influential merchant in London, still the Guernsey family preserved their 'noble independance.'

Mr Josias Le Marchant of the Haye du Puits was a very quiet country gentleman, and a man of great probity. Reserved and hesitating in his speech, as a jurat of the Royal Court his orations were neither lucid nor lengthy. He married a Miss Judith Ozanne of the Hougette in the Câtel parish, sister of Mary Ozanne, wife of Robert Porret Le Marchant, Jurat 1784, Bailiff 1800. This office he resigned in 1810 and Peter de Havilland was selected in his stead. Mr Robert Porret Le Marchant, though an excellent man, was weak both in body and mind, and never interfered in the politics of the island after his resignation. He retired to his house at the Câtel, where he died, and which is still known as 'the Cottage,' a name which recalls the littleness of the grandee-ism of that day, for it is the largest house in the parish.

Robert Porret Le Marchant was HM Receiver for some years, and had his office in LeFebvre Street, opposite his late father’s mansion ([Le Manoir sous la Porte] lately purchased by Dr McGrath). His chief Clerk was John Carey of the Grange, who succeeded in the Receivership, and held it for many years, getting a pension of £150 a year on his retirement. Mr Le Marchant–Thomas Le Marchant (this patronyme he has obtained since the purchase of the Haye du Puits)—bought this estate at the death of Miss Sophie Le Marchant, the last unmarried daughter, who had been living for some years under the care of the family of le Sieur Le Tissier, formerly tenant farmer of the family, and who became possessed of the estate of La Pouquelaie and £2000 or £3000 by the will of this Miss Le Marchant as remuneration for services rendered since the death of her parents.

Mr Peter Le Marchant, brother of William Le Marchant, Bailiff, was a maniac and was under the surveillance of Mr D. Dorey of the Groignet, where he had a room in the gable of the farmhouse, as a place of safety during his fits of insanity, though 'singing aloud' seems to be the true extent of his malady.

The alliance of Elizabeth with Dr F[rancis] P[ery] Hutchesson was against the wishes of the three Misses Le Marchant, sisters of Eléazar Le Marchant, Seigneur du Comte and dependancies. Dr Hutchesson had been in the army and came here with his regiment. The Le Marchant property had devolved in the line of Eléazar and his sisters, and the whole ought to have descended to the family of Charles, but the old ladies would not countenance the marriage of Elizabeth with an army man (un Swablin³), and, in consequence, the largest share of the property was diverted from its proper line, and went to John Le Marchant, son of James, of Rotterdam, who had married Mary, the eldest daughter of Robert Porret Le Marchant, and a large share was given to Thomas Priaulx of Montville, a legatee under the will of these ladies. I have noted this act of the Misses Le Marchant, as I had it from Dr Hutchesson himself, who, being on his side descended from one of the most respected families in Canterbury, was in the full expectation of a large share of his aunts’ property. But they, fancying that the name Le Marchant denoted a foreigner or one of French family, left their fortune entirely away from the Doctor! At the same time the conduct of the two sons of the marriage was such that the Canterbury property was irretrievably willed away from them – 'thus'—said Dr Hutchesson 'have I fallen between two fires'.

Mr Charles Le Marchant was a very good man, but noted for his immense stupidity. His wife was widow of Mr William Le Mesurier of the College by whom she had a son, the handsome and popular Henry Le Mesurier BA of Brazenose, Oxon., who died an ensign in the army. After the death of her first husband she wrote a letter to her kinsman Charles Le Marchant, who was vegetating somewhere in the West Indies, to come over and marry her. The obedient Adonis hastily embarked in a ship and arrived home, and greatly astounded Mrs Nicolas Le Mesurier, ugly Betty’s sister-in-law, when the flounce4 became known. For only the night before his coming the ugly and disconsolate widow, all tears and sorrow had been at her house, loudly bemoaning the dear departed! His elder brother Thomas, a retired Lieutenant of Mariners (familiarly called [John] Tom Sticks by the Patricians and le Ramoneaux (the chimney sweeper) by the Plebeians)—by his miserly habits had hoarded so much money that he 'cut up' splendidly, and Charles found himself possessed of a very good competence. His son Alfred who was brought up as a barrister, and was heir of the Grandes Maisons, was a man of some natural talent, but he shortened his life by living fast. The Hutchessons and Baynes inherited this property.

¹ Spelt Puit throughout. The Library has a copy of the auction catalogue for sale of the estate in 1930.

² Of Upper Harley Street. He had married Ann, daughter of John Le Marchant. Their eldest son Thomas was born in 1802 and in 1835 married Margaret, daughter of the RH Sir John Vaughan and the Hon. Augusta St John. He was a magistrate for Hampshire and Berkshire, and assumed the name Thomas Le Marchant Thomas by royal license in 1865. See his obituary in Vol. II of Jacob's Annals (Library reference copy).

4 A Guernsey word for an engagement, or more particularly an engagement ritual involving walking round arm-in-arm. The word is derived from old French, 'afiancer.'