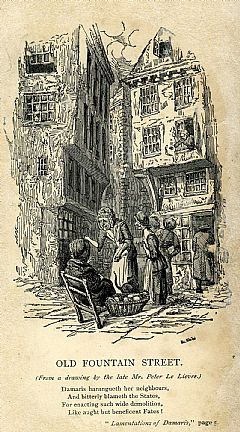 Métivier's poem has been translated by J. Linwood Pitts, a Guernsey antiquary. The translation is not literal and was published along with a selection of poems by other authors in Patois Poems of the Channel Islands of 1883.¹ The poem itself first appeared anonymously in the Guernsey newspaper L'Indépendance, on 2 September, 1826, where it is dated 26th August, 1826.² It then appeared in the unattributed Rimes Guernesiaises, printed by Mauger in Guernsey in 1831.

According to his poetry, George Métivier was himself born and brought up in Fountain Street. In 'Les Chansons d'un r'venant,' written in 1842, he says:

Lamentations de Damaris and translation; an earlier translation is to be found in The Star of 28 March 1865, composed by C H W of The Mount; a further discussion, from 1916, and another poem on the subject of the demolition of Fountain Street, following the States' original decision to improve it; and yet another poem on the same subject, attributed incorrectly to Métivier by Louisa Lane Clarke in her 1880 work, The Folk Lore of Guernsey and Sark. Métivier's great-grandmother had a house in Fountain Street, perhaps the same one; he writes about her and the old days in Fountain Street in the Elizabeth College Magazine.

² The date of a States meeting that decided the fate of Fountain Street.

³ 'I was brought up in Fountain Street, facing the Haut-Pavé [Mill Street], and would you believe it, I can hardly recognise the place they tell me was my birthplace now .... 46 years after my father died, the house is still standing on its street-corner, I can see it ....' See Gazette de Guernesey, 7 July 1810, 'The House of John Guille, esq., situated in Fountain street, will be sold to the highest bidder, on Wednesday the 18th instant, between the hours of 11 and 12 (if not previously sold).'