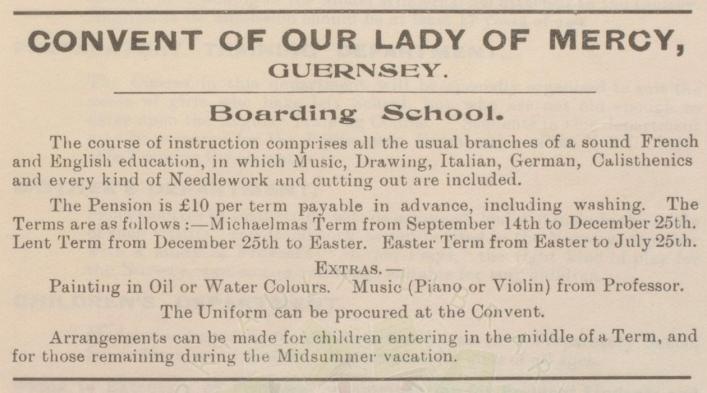 Chapter 47 of Les Soeurs des Saints Coeurs de Jésus et de Marie, by the Abbé A Leroy, Rennes: Simon. The foundation of the first Catholic primary schools in Guernsey. [The boarding school in the 1913 advertisement shown above was in Cordier Hill, but was run by a different order. For the history of this order, the Sisters of Mercy, in Guernsey, founded from Brighton, Sussex, and prominent in the education of islanders, see the Centenary Souvenir (1868-1968), in the Library collection. They acquired Blanchelande in 1956 from the Sisters des Saints Coeurs.]

The Little Schools in Guernsey

The Church of Le Rosaire, high up in the town of St Peter Port, the capital of Guernsey, was founded by a priest from Normandy, who was a refugee there during the French Revolution.¹ The next to come, around 1860, were priests from Rennes, who attempted to establish a college.²

The French-speaking population was concentrated in this area, and a few years later a parish was successfully set up for them with M Boone as parish priest. His was the idea of using part of the former college buildings for his schools. It was a poor area, so the parish schools would have to be co-educational. M Boone made inquiries and concluded that the Sisters of the Little Schools (les Soeurs des Petites Ecoles) would be ideal for what he had in mind. He went over to Paramé himself and discussed the matter with the Mothers Superior. Episcopal authorisation was granted, and agreements drawn up and signed. On 29 July 1874, three Sisters arrived at St Peter Port to begin their mission.

The little institution in the Channel island, where the population is half English half French, part Catholic and part Protestant, went along with local requirements and taught both French and English. An increase in pupil numbers led to another Sister joining the staff in December. There were three classes, with classrooms on the ground floor, in a part of the old college. The Sisters lived on the floors above, with a few boarders.

When Mother Marie-Therèse visited in 1876, she heard nothing but praise for her nuns, who had managed to keep the children in order and make them keen to study. The good priest was full of praise, and thanked her for having chosen him such good schoolmistresses, especially the headmistress, whom he thought most capable and very devout.

The Petites Ecoles du Rosaire went on like this for 25 years. An account of the annual prize-giving in 1885, published by the island's French newspaper, gives some idea of how things were.

The school speech day was held in the local Temperance Hall, and they could hardly fit the audience in. It was a lovely sight, calm, quiet and innocent, this assembly of little girls and big lads in party mood come to be rewarded for their hard work at school. It was extraordinary to hear the little boys and girls express themselves so correctly in our beautiful French tongue, without the slightest trace of a local accent. It is an achievement worthy of note, as it does the greatest honour to the good Sisters and their excellent teaching methods.

Jeanette, a little two-act play, was well performed. During the interval a gorgeous little group of toddlers sang kiddies' songs to us. This was followed by a choir of the bigger girls who kept well together and sang with brio. Then a young boy recited some poetry to us. After a few moments the curtain rose again on the children whose English was demonstrably as good as their French. [...]

Sister Antoinette managed the sisters (from 1882 onwards there were five) and encouraged the growth of the infant and primary schools. She had to be long-suffering and determined: resources were limited and she was forced to have recourse to an annual lottery to make ends meet.

The construction of the Guernsey schools

Sister Brigitte, who followed her, had spent 16 years in the north of England. She had set up an orphanage in Tudhoe, and when they ceased providing this service in 1894 the Sisters had retired to their original base. The new Superior, who had experience of the positive effects orphanages can bring, had the idea of setting one up in Guernsey. Although the project itself came to nothing it did cause the Sisters to buy, in September 1895, 'a house, outbuildings and garden, formerly a part of the Hougue de Vauvert,' near the parish church. This purchase led in turn to the development of the Sisters' Schools in St Peter Port.

After the orphanage idea was rejected by the bishops, the Sisters set up a girls' school in their house, 'Highlands.' This was a fee-paying school and distinct from the co-educational school; in it lay the germ of the boarding-school to come. Here, based in a property they owned, they had acquired a solid base from which to operate.

The parish schools were certainly doing well and expanding, with several hundred pupils on their roll. But time had marched on, and the old college buildings no longer had the authorities' approval. In addition, in order to benefit from the subsidies that the States allocated to institutions fulfilling certain criteria, they had to extend the original buildings or leave what was rather basic accommodation. The parish faced other onerous expense and could not be certain they would be able to fund these changes, so the parent institution instead decided to take on the project.

Next door to 'Highlands,' the property that they had already purchased, was a house called 'Mont Plaisant.' They bought it on 14 February 1891, and putting the two buildings together resulted in a space suitable for a serious establishment.

When the curé, M Dolman, informed the bishop of this in 1900, Monsignor Cahill replied: 'I understand that the Sisters have generously offered to build the new schools on their own land, thus providing for the needs of Catholic children. That is extremely generous of them. Please thank them for me. May God reward them for the sacrifice they have made for the children! Bless you, you and the Sisters.' When he relayed this message the curé added: 'Very Reverend Mother Superior, it is my pleasure to give you His Excellency's answer. He approves, and nothing is stopping you from getting going straightaway. You will be doing a great good, and the Lord will reward you greatly. Notre-Dame du Rosaire, 22 October 1900.'

They turned for advice to Guernsey States' architect, a very experienced man who knew exactly what the States were looking for. The plans were drawn up, worked on, finalised, passed for approval to the parent institution and adopted. The States told the Mother Superior and her Council that 'in recognised schools where the teaching is judged to be of sufficient standard by the inspector, the States will pay half of the rent on the buildings, and other expenses, and that a capitation grant is awarded to the teachers depending on exam results.' The curé and the bishop were both keen that their schools benefitted from these generous subsidies, which would help with the expenses both of the parish and of local Catholic families, most of which were not very well off. The Sisters were of the same mind.

The Semaine Religieuse, published in Rennes, described the events:

10 February 1902 saw the official opening of the primary schools of Le Rosaire in Guernsey, recently built by the Sisters of Notre-Dame des Chênes. These schools, which the Catholic population cried out for and which were purpose-built for them, have 250 pupils. As is well known, Guernsey is a small independent republic, under English authority.

The new Guernsey law on compulsory education, brought in 9 May 1900, gives private individuals and congregations the right to found free schools, and provides considerable subsidies to schools shown to be meeting a public need, as long as they have government approval. The States of Guernsey ruled on 16 December last that the schools of Le Rosaire fulfil these criteria and granted them the States' subsidy.

At the opening ceremony, the children sang songs in English and French. The schools were opened by Jurat de Garis. Notable in the front row were two Anglican ministers, who as States' deputies had spoken and voted in favour of the Catholic schools. They had both addressed the States in French expressing in the most gracious terms their respect for the school of Le Rosaire: 'We have voted for this school in recognition of the services that the Sisters have rendered in our island for the last 26 years, and also because we believe that teaching uninformed by religious faith is worthless.'

The parish schools were moved from the old college buildings into Highlands, next door to the church. The school that the Sisters had started in their own name was finally settled into the house known as Mont Plaisant, with its little incipient boarding school. The original divide between the two properties was altered just a little, as the land on which the parish schools were built belonged to both. The new owners had adapted their property to its double purpose.

The Sisters themselves moved out of the old college in 1903. Sister Brigitte, the Superior, who had done such a good job in setting up the Sisters of the Holy Hearts for the future in the island that had made them so welcome, died on 20 March 1906, and joined Sister Antoinette in the island cemetery. The first two Superiors of this mission bestowed a little holiness on the schools' foundation and left their colleagues two examples of great virtue. [From the French.]

¹ The first Catholic priest to have a congregation in the island, 'a poor chapel in the Bordage,' was the extraordinary and flamboyant orator L'Abbé Coulon, confidant of Marie Antoinette, who was here for around three years. The chapel later moved to Tower Hill. See Origin of the Catholic Mission of Guernsey, extracts from a sermon given at Notre dame du Rosaire on Rosary Sunday October 5, 1913, by Reverend Bourde de la Rogerie, on the occasion of the 120th anniversary of the foundation of the mission, in the Library. See also 'Notre Dame du Rosaire,' Guernsey Life, II (10), October 1967, by Marguerite Miles Le Gallez, Churches File in Library, and 'Nuns outsmart Nazis,' in 'Notre Dame Express,' Guernsey Press 5 July 2012, in Schools file. For a modern version of the history of the schools, see the school's own website's 'A short history of Notre Dame du Rosaire School.'