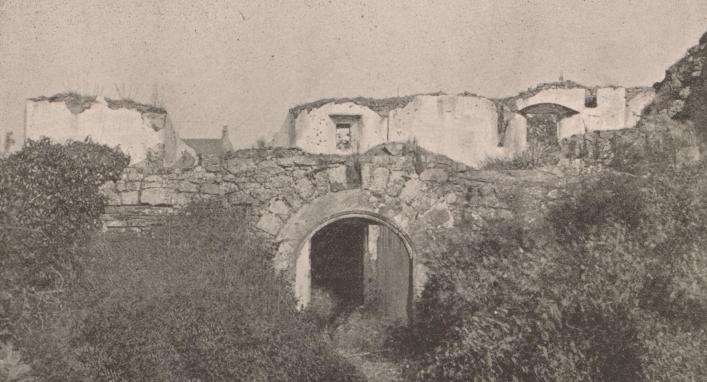 A newspaper report of a trip by the Société Guernesiaise to the Les Quartiers Estate in the 1920s. The photograph is from MacCulloch's Guernsey Folk Lore.

'Les Quartiers' to a learned Society simply isn't. These people delve into the beginning of things and origins are more than haphazard and changeful presents. Thus to the Société Guernesiaise what was visited was 'Les Caretiers.' These estates formerly belonged and are named after the old family of Caretier, or Le Caretier, of which a branch still exists under the name of Quertier [the original branch of Caretier seems to have died out c15th century.].

The earliest record of the name in Guernsey is in the Extente du Roi of 1331, where we find a John Caretier was Chaplain of the Chapels in Castle Cornet, and also of the Chapels of the King's Grange of St Peter-Port. In the same year there was a Guillaume Caretier living at St Sampson's, and Miss Carey thinks it was possible he was the builder of their original home. One Guillaume Caretier was Bailiff of Guernsey from 1447 to 1466.¹

It was from here that Mr John Guille, Bailiff, took bodily away a small doorway over which was cut the Caretier Arms. This he built into the outer wall of the St George's Estate, Câtel, where it can be seen to this day, turned into the Guille Arms. Through the Naftels the estate passed to the Le Patourels, who still owned it in 1855. Since then it has passed through many hands.

'Les Quertiers' is No. 919 in McCormack's The Guernsey House, 1980; see esp. p. 196, and photograph No 7. He regards it as an especially important house, with the finest fireplace in the island, of which there is a sketch by George Bramall in the book. A photograph of the fireplace is to be found in the Quarterly Review of the Guernsey Society, Winter 1955; this belonged to Vera Carey and is dated c. 1936, in the article which it accompanies, by E B Moullin, pp. 79 ff. It is said to be late Gothic, probably from Brittany, and dated about 1500. It was only rediscovered in 1936. 'There are two houses of Les Caretiers, obliquely opposite to one another, and also an ancient ruin which is precisely opposite the house with the fireplace.'Part of the estate in ruins, with an arch discussed by McCormack, is illustrated in MacCulloch's Guernsey Folk Lore (see illustration above); the photograph, by Dupuy, dates from before 1900. Far less of this building 'the only mâsure which can be of any great age so far discovered in the island' stood by E B Moullin's time. Moullin conjectures the the fireplace may originally have come from this ancient dwelling, a source of components for later buildings. The round granite arch of the entrance door, he tells us, 'is now at la Maison de Bas, Vaugrat.' There is a photograph of this arch in its new situation in the Library photographic collection, dated 1928.

The reason why the house was quite so fine may lie here, in a note by George Lee in his edition of the Notebook of Pierre Le Roy, p. 11: Mr William de Beauvoir's distinctive title 'du Hommet' is believed to have been derived from a hillock which formed part of the estate of the Cartiers. This property seems to have come into the possession of the eldest branch of the de Beauvoir family by the marriage of a Guillaume de Beauvior with Jeannette Cartier in the 15th century. There is a note about this house In O de L William's Guernsey Fireplaces notebook, No 18.] There is a photograph of a massive doorway within the house in the Library's Reminiscences of Amias C Andros, I, p. 113.