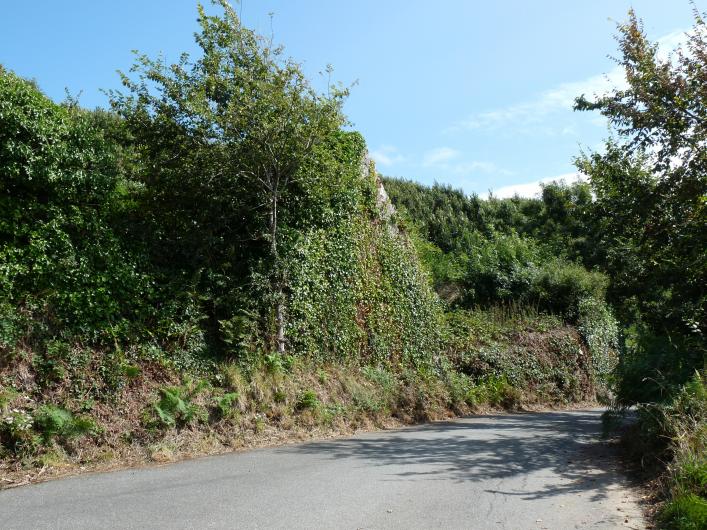 From Edith Carey's Report of the Folklore Section of the Société Guernesiaise, Rep. and Trans. 1931, p. 149. The photograph shows the overgrown ruins from the road before their recent redevelopment.

Edith Carey writes: 'My [western parishes] informant gave me the origin of an old country dicton or lure, as we call it in Guernsey—'Jamais mary, fier comme Jean Bonamy' (Never vexed, happy like Jean Bonamy.) This refers to a Monsieur Jean Bonamy who lived at an old house at La Pomare, St Pierre-du-Bois, which had been in ruins for a long time and was finally demolished three years ago. It was known as 'la vieille maison de Jean Bonamy.' It was owing to his unfailing good humour that his name has been handed down. It appears that he was always cheerful and that it was quite impossible to make him angry. This so exasperated his wife that she decided to make a great attempt to make him angry at least once in his life. She collected a huge pile of furze and wood on the trépied and set it alight, hoping that when he came in and saw the great danger of his house, with its old thatched roof in danger of catching fire, that even he would be roused. But it was all in vain and he remained as calm and cheerful as ever, and she apparently had to resign herself to her fate!

I have received a letter from another friend living at St Pierre-du-Bois, in which she says:

'I was very interested in your lure about Jean Bonamy, and I was wondering if it was the same my mother had told me many times, that her grandmother had told her that la Dame Bonamy had never seen her husband cross and her last attempt was, to make a roaring fire on a summer's day; but when he returned from his duties he looked at the fire, took a chair and sat near it, saying, 'L'air du feu est sain.'

My correspondent thought that Jean Bonamy was Rector of St Pierre-du-Bois.1 If so it was from 1691 to 1739, and inducted as Dean of Guernsey in 1716. This shows the persistence of these old folk memories.'

The house referred to here is No. 315 in McCormack's The Guernsey House. It was evidently almost unique, having a 'Jersey arch,' which was moved, presumably when it was demolished, to what is now the Coach House Gallery in St Peter's, and extremely old, dating from c. 1450. [This is as reported by McCormack, but note below that Colonel Delancey Williams says it went to 'Brouard's house' at L'Islet. Delancey Williams should have written 'Brouard's house at Les Islets' [this is indeed the Gallery in St Peter's].] Its fireplace was fine, with corbels carved as heads. There are still traces of the house to be seen.

In the Bonamy family files in the Library is the following note (No. 29):

'The earliest Bonamy known to us is Ralph Bonamy, mentioned in the Rolls of the Priory of St Michel du Valle as holding lands on the fief of Suart in 1309 and Longues in 1306. In 1305 a Robert Bonamy is mentioned as owing 40 deniers to Robert Blanche.2 Richard Bonamy's son John was holding land on fief Suart in 1339, as well as on the fief of La Pommare, on which latter fief we find the family still seated in the 15th century.'

General Oliver de Lancey Williams made notes about old Guernsey fireplaces in 1956; 'the only book he ever wrote,' which was presented to the Library in 1960. No. 21 is 'La Pomare:'

'A ruined house belonging to Mr Herbert Brouard. This house was burned down many years ago, rebuilt and finally left to decay. The very fine archway was removed and is now in Mr Brouard's house at L'islet. Originally a Bonamy house it came to the Brouard family by inheritance. A fine granite transom 17 inches deep and 7 feet long.'