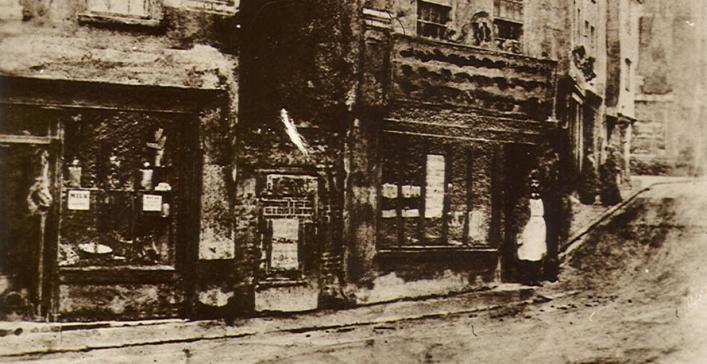 The Star, September 27, 1916. The detail is from a photograph of Fountain Street c. 1870, from the Library Collection.

The Fate of Old Fountain Street

Ninety years ago there was considerable excitement in the Island, particularly in Town, when the States were summoned to meet and discuss the question of several important improvements to Fountain Street and its environs. The meeting was held on August 16, 1826. On that occasion Mr Daniel de Lisle Brock, the Bailiff, read a report in which he referred to the new roads which had been constructed by General Sir John Doyle, Lieut.-Governor. 'But all these fine roads,' said Mr Brock, 'require an outlet to the town and harbour, where everything goes and everything comes. Fountain Street is an obstacle to this outlet; it is a sink of filth that is sufficient to disgrace any well-regulated town. It gives to strangers who arrive here, very unfavourable impressions of the Island, and they are at once disgusted with a place which, in other respects, would afford a most delightful residence.' It was stated at the time that the street was in some places only seven or eight feet in width, and was deprived of air and light, and the houses which consisted of small low rooms and had narrow stairs, were receptacles of dirt and infection.1

The writer’s father was born in old Fountain Street and told him that it was an easy matter for a person who lived there to shake hands with another person on the other side of the street from the upper windows of the house ...

The States adopted the proposition to widen the street, and for this purpose they decided to pull down thirty-five houses. The cost of the land and re-erection was £25,780. It was also decided to build a fish market in connection with the improvement to Fountain Street, at a cost of £1,500. ... From this scheme evolved the splendid houses which are an ornament to Fountain Street, and whose handsome and uniform proportions should have been copied in connection with the widening of Bordage which is now going on, and where all sorts of architecture, if allowed to be followed, will render the thoroughfare the most unsightly in Town.

A Protest in Rhyme

As may well be imagined the decision of the States was resented by some of the older inhabitants of the town who were content to continue to live their lives as they had lived them since they were children. How they couched their protest is not recorded, but their feelings of regret at seeing their beloved old street fall and disappear were appreciated by 'Un Câtelain', who came into the world at about the same time that the houses in question were pulled down. ... the following verses which afterwards appeared in a work published by him and entitled Rimes Guernesiaises. They were written by the late Mr T. Lenfestey, who lived near the Câtel Farm Field.2

L’Assemblaïe de Pàreisse (The Parish Meeting) [of which the last lines are:]

1 The problems with old Fountain Street are listed in the Gazette de Guernesey of 12th August 1826:

the countless accidents—the daily difficulties faced by carts using the street, the danger to pedestrians meeting carts or horses, are so notorious that people actually avoid using the street so as not to witness any accidents. The foul air and stink from piles of rubbish are yet another reason to get to work on the improvements.

For a detailed description of the arrangements and works see Lenfestey, G. M., Public Sewers in Guernsey 1826-1966, pp. 376-77, 'The Renovation and Rebuilding of Fountain Street,' in Transactions of the Société Guernesiaise, XXV (III), 2003.

The Committee of the States for the improvement of Fountain-Street, give notice, that on Wednesday the 18th inst., they will sell by Public Auction, on the spot, at 11 o'clock in the morning, the Materials of the aforementioned HOUSES, situate in the lower part of the said street, viz.: The House the late property of Mrs Harris; Another House adjoining, late the property of the heirs of Captain J. Bazin; And a House adjoinin this one, late the property of Mr W. Le Lacheur. The purchaser shall engage to take down the said houses, and carry away the materials, at his expense, according to the conditions which will then be produced. For further information, or viewing the premises, apply to Mr James Du Port , Assistant-Supervisor, or to Mr Matthew Gallienne.

The States continued to widen the road, purchasing and demolishing or rebuilding several houses in the early 1870s.

2 The writer appears to be mistaken as to the authorship of this poem. The book Rimes Guernesiaises, which was published under the pseudonym 'Un Câtelain,' does contain the text of 'The Parish Meeting,' but was first published in 1831, when Lenfestey would have been only 13 years of age. In fact, 'Un Câtelain' has long been acknowledged to have been George Métivier, who attributed his knowledge of and interest in Guernsey French to his days as a child spent at St George in the Câtel. This poem, however, is most unlikely to have been written by Métivier.

Métivier, in a preface to a later edition of Rimes Guernesiaises, complains that several poems that were not only coarse in conception and language, in his opinion, but that were completely unknown to him, had been added to the collection without his permission and published as part of his work; in later editions he had removed them. This confusion on the part of the publishers may have been entirely innocent. Métivier submitted various poems 'from his collection' anonymously in the early 1820s to L'Indépendance newspaper, published by Dumaresq and Mauger, only acknowledging his own work with the initals H.H. in October of 1826. The Editors informed their readers that

the patois poems [poèmes insulaires] submitted by our old friend will from now on be indicated by 'H. H.'. His zeal in maintaining the purity of the Guernsey dialect remains still strong enough in the eyes of devotees of such poetry to justify his wishing to 'keep himself apart'.

The publishers may simply have forgotten that some of the anonymous verses were not by Métivier, who was out of the island in 1831 when the Rimes were published.

We may assume that 'The Parish Meeting' was not by his hand, and neither was 'La Vielle Rue de la Fontaine, et les Nouviaux Marchis,' attributed to 'Un Câtelain,' by Louisa Lane Carke, and published in her book The Folk Lore of Guernsey and Sark as such in 1880. The author of 'The Parish Meeting' cannot have been born at the same time as the houses in Fountain Street were pulled down, as the author of the above piece asserts, for he would have been only a baby when the poem was first published in L'Independance on 30th September, 1826, where it was attributed to 'Un Amateur d'Antiquitai.' Thomas Lenfestey (1818-1885) did write poems in Guernsey French, and was a denizen of the same parish; he was born too late to have written 'The Parish Meeting,' although he might have written 'La Vieille Rue &c.' See, for example, J. Linwood Pitts' Patois Poems of the Channel Islands, 1883, for a translation of one of his works, and his own book of poetry in standard and Guernsey French, Le Chant des Fontaines, (par Thomas Lenfestey des Fontaines), Guernsey: Thomas-M. Bichard, Rue du Bordage, 1875.

A full translation of 'The Parish Meeting' is to be found in Pitts' book of patois poetry, where it is attributed to Dr James Tupper. Linwood Pitts was editor-in-chief of a series of books published around the same time under the auspices of the Guille-Allès Library, which also included the collected works of Métivier, Poësies guernesiaises et françaises; edited by Edgar MacCulloch, it does not include 'The Parish Meeting.' All these volumes are available for consultation at the Library.