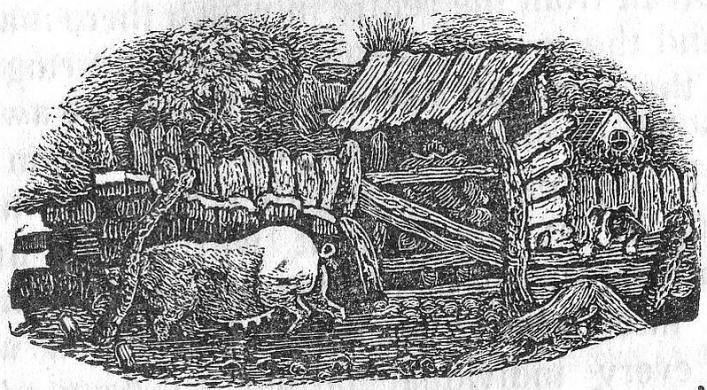 From an editorial in the Star of December 12, 1836. The woodcut of a 'frisky' Guernsey pig is from Dr Thomas Bellamy's Pictorial Directory of 1843, in the Library collection. The writer comments on the credulity of those in the country parishes, who continue to venerate such impostors and quacks as Louis D'Orléan, about to face trial for imposition, and in doing so gives us details of the case of Nicolas Roussel which, although having occurred in 1807, 'is not yet forgotten, and just a few particulars respecting it will not, just now, be unacceptable'.

NICHOLAS ROUSSEL, an old grey-headed man, was indicted as an imposter, and accused of attempting to cure witchcraft. He stoutly acknowledged the fact, but maintained that his recipe was infallible; and he called twelve witnesses (as many as can be allowed by law to prove any one fact) to prove it: scores, if he had been allowed, he might have had, for numbers volunteered their services.

One, a miller, declared upon oath that his mill had been for a long time quite useless to him. There was water in abundance, and the machinery had been repeatedly repaired, but all to no purpose: nothing could make it go: carpenters, smiths, millwrights, had all uselessly exercised their skill upon it. Suspecting at last that the mill might be charmed, he applied to Roussel, who gave him a small white stick, directing him to place it in a certain part of the mill. The miller did do and lo! and behold, off went the mill, as if by magic, round and round, as well as ever, and it continued to do so, whenever wanted, from that day to the time of the trial. Another witness, a person residing at Plymouth, being excessively unwell, of an illness which appeared to baffle the skill of his medical attendants, attributed his sickness to witchcraft, and hearing of Roussel's extraordinary power, came over to this island, consulted him, followed his prescriptions, and was eventually cured! This man, hearing that Roussel was under trial, actually quitted his family and affairs, and came over to Guernsey unsolicited, for the purpose of bearing evidence in his favour. A third declared that his field laboured under the malediction of the devil: his parsnips would not grow, neither could he weed them, as the iron weeders (small instruments used to extract weeds) actually went alone: he applied in a fright to Roussel, who soon set all to rights! The other statements were equally marvellous. One man's cow would not eat, another's pigs frisked about in various directions; Roussel put them all to order. He was, in short, in the opinion of the witnesses, the most valuable man of the day. Such was the evidence. He was, notwithstanding, sentenced to an hour's exposure in the market-place. This was his grand triumph. Crowds went to look at him. The rich pitied, the poor dreaded him: by both he was relieved, and had far better have been left in his previous obscurity.

Roussel was recognised as a type of quéraud, more commonly known in Guernsey by the term désorcelleur; see Les Sorcelleries. For another story of 'Collas Roussé' and his wife Nancy Guille, farmers of Vazon (and shapeshifters—favoured animal: the hare), see Jennings and Marquis, The toad and the donkey, Francis Boutle Publishers: London, 20i1, pp. 292-3, originally published in Guernsey Folk Lore, pp. 361-5.

In her MSS notes to Guernsey Folk Lore, Edith Carey repeats the words of F Corbin Lukis concerning Collas and his wife:

Nicholas Roussé, or Russel, was called Le Rimeur, his dit-ons were household words in his day. He was a quiet, inoffensive creature, and a charge of witchcraft, or being a sorceleur, brought him before the Royal Court, where, being found guilty of having exercised something of his craft, he was condemned to the Cage on a market day, to be gazed at by the people, the majority of whom pitied him. His gentle manners and customary doggerels were more amusing than otherwise, and, when placed in his cage, a stool having been accorded him by the Sheriff, he exclaimed with good humour. 'Eh, voici Colas Roussé, bien assis sur un scabé,' (a scabellon is a pedestal.)

Collas Roussé was consulted by the Islanders on doubtful questions and in cases of lost property, and truly those who went to consult him were as guilty of witchcraft as himself. He was required to find lost rings or lost property of every description. What appeared most condemning to his judges were the divining rods which he was wont to consult or appeared to amuse his hearers with: 'Collas Roussé et ses petits bois' became proverbial. Though the poor man was punished by the Royal Court, many of the inhabitants still believed in him, and in the powers of these acts of divination, and they felt for and pitied him. These supposed powers were said to be vested in a son who might be the seventh son.