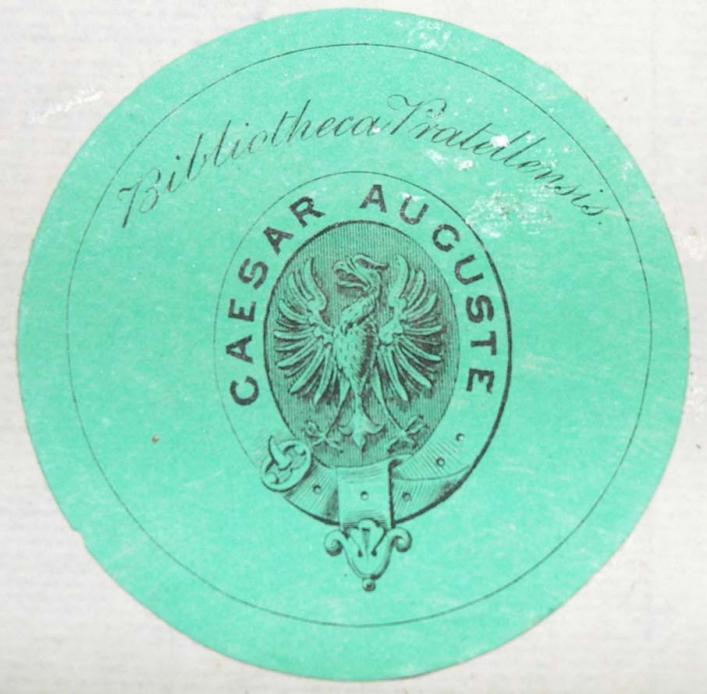 I want nothing called after my name, and I will give nothing to those who already have much. .... If the money be not properly administered, better it had been thrown in the sea.

Scholar, author, and bibliophile, Osmond de Beauvoir Priaulx was born in Guernsey in 1805. He attended St Catherine's College, Cambridge, after which he based himself in London. According to Jane Barlow, in her diary in the Library collection, he was 'handsome,' and she liked dancing with him at balls. He dallied in French radical politics as a young man in Paris. Called to the bar in 1832, he married late, having lived the life of a bachelor of means in London, and having amassed a vast and scholarly collection of books, which forms the basis of the library today. He wrote several books, one of which was an important work on progressive education, which is still studied by modern educationalists. He was apparently an enthusiastic genealogist and could recite from memory some of the more important family trees. He remained interested in Guernsey affairs, particularly education, and felt strongly that his fellow islanders should have free access to books.

A quotation from the autobiography of the philosopher Herbert Spencer reads:

The other addition to my social circle was a gentleman with a remarkable name—Mr Osmond de Beauvoir Priaulx; the author of a work entitled Quaestiones Mosaicae. He was famed for giving sumptuous dinners to somewhat select parties. [Then follows a description of some of the guests, including the author Thackeray.] Mr. Priaulx was called by his friends an intellectual sybarite, and while one of these words was justified by the character of his parties, the other was justified by the quality of his dinners, which differed from other dinners, even of the elaborate kind, in that they always had a good deal of the unexpected; there were unusual dishes. Various choice wines too, eight or ten in kind, came round in the course of dinner and dessert; of which the Château Yquem was always looked forward to by the guests as yielding the culminating pleasure of the feast.

Osmond's cousin also recollects his soirees, in Haud immemor, p. 146, in the Library:

My cousin, Osmond Priaulx, himself a man of marked ability and learning, though too critical and too otiose to be himself a producer, was much given to entertaining his literary and political friends, and his select dinners at his house in Cavendish Square were 'feasts of reason.' The parties were always small, and I have met there the best of company. Herbert Spencer and the late Sir Francis Doyle were frequent guests. Doyle was an admirable diner-out, touching nothing in conversation that he did not adorn with wit and erudition. In his company and in Herbert Spencer's one should have been provided with the Boswellian note-book and pencil. I remember one evening when both of these were among the guests, the question was started, 'What is the most interesting building in the world?' The party was eight in number, and the selections, if I remember right, were, Windsor Castle, Westminster Abbey, the Alhambra at Granada, the Mosque of St Sophia at Constantinople, the Cathedral at Cordova, the Taj Mehal at Agra, the Kremlin at Moscow, and the Great Pyramid; the two first being Doyle's and Herbert Spencer's respectively; but there were no two in agreement, so the competition was undecided.

[Haud immemor: reminiscences of legal and social life in Edinburgh and London, 1850-1900, by Charles Stewart (1841-1916). He was thirty-five years younger than his cousin Osmond, but shared his profession of barrister.]

In Tait's Edinburgh Magazine of 1837, another of Osmond's famous works is reviewed:

... the State and Prospects of Education ... The volume of the author with the foreign-looking name of Osmond de Beauvoir Priaulx, though he is, we are informed, an English gentleman, is a fine emanation of the spirit of humanity—the speculation of a philosopher, of highly refined mind and warm philanthropy, whose theories command reverence from hard, practical men, even while they may reasonably doubt about how they are to be put in action. Educators should read his book, if not to follow his methods, yet to soften their hearts and enlarge their charity. ... a work containing so much sound and original thought ... (page 742)

His gift to the people of Guernsey, made several years before his death, not only included Candie House and gardens, but also his entire library. His charitable project began many years before, in 1859, and reflected his greatest interest; he intended the rents and income from Candie Estate—'The Priaulx Hospital Childrens' Fund'—to be used for the education of disadvantaged children in Guernsey, but the Parish were recalcitrant and in 1879 'decided not to accept the generous offer to establish in this Island a place wherein to lodge and train such children as might be committed to their charge by the Directors of the respective Hospitals of this Island, according to the conditions attached to the said offer.' They wanted to use the money to build a reformatory. Julius Carey prevailed upon him instead to fund scholarships at the fee-paying Elizabeth College. This proposal received extremely short shrift and Osmond, with his progressive ideas on education, seems to have grown irritated with the States' prevarication. He wrote in an angry letter to the Star:

I gave to the Town and Country Hospitals, remember, and yet the children still live in their old quarters and still wear the same ugly dress. But the Douzaine wants an Industrial School for the 'little Arabs' that crowd your streets? They cannot appropriate the fund I gave to the Hospital children, to that I cannot accede. Endow Elizabeth College with 'Priaulx Exhibitions'? That is not my ambition. I want nothing called after my name and I will give nothing to those who already have much. If [the money] be not properly administered, better it had been thrown in the sea.

His school plan was rejected, but the gift of the House and Library accepted, and the States agreed to fund the repair and conversion of the house. His books now form part of the various collections housed within the library, and the Priaulx Library has a duty and responsibility to look after them, on behalf of the people of Guernsey, in perpetuity.

Many of his own books contain his distinctive bookplate, shown above, with the Priaulx family's 'Caesar Auguste.' As well as history and geography, he also collected fiction and poetry and items reflecting his interest in genealogy. His collection was later supplemented with bequests of books and documents from various members of the Carey family, especially the local historian Edith Carey, and Wilfred Carey, an orientalist. Visit the library to find out more about this fascinating collection; many of the books are now catalogued online.

His great friend Amias Andros, who helped convert Candie House into a Library, wrote in a letter to the Star newspaper of May 2, 1891, concerning the obituary notice for Osmond Priaulx that had been published in that newspaper:

[....] the brief memoir [....] was partly composed by his brother, Major Henry Priaulx, and myself at Cavendish Square, when the end was fast approaching. I read over the draft to him when completed - as far as it then could be - and he gave it his approval, begging me to order for him 50 copies of the Star whenever it appeared. Poor fellow! he died before his brother, after all, and I am now the survivor of what I now call the Cavendish Square Committee, who used to meet there so often to discuss the Candie plans.

Candie House was built around 200 years ago by Peter Mourant, a merchant and business man who made his money from brandy running and smuggling. The death of his wife, Marthe Mollet, in 1798 is recorded in a family bible held in the Library.

The house was bought by Joshua Priaulx in about 1830 and sold on to his brother, Osmond de Beauvoir Priaulx. Osmond, who had a perfectly adequate house in Cavendish Square, London, leased it to Sir Peter Stafford Carey, Bailiff of Guernsey. The Bailiff occupied the house until his death in 1886. There is a brass plaque in the Library's St Aubyn Room inscribed with the words 'Sir Peter Stafford Carey, Bailiff of Guernsey, died in this room.'

The building was enlarged and quite heavily remodelled by his friend, author, architect, and engineer, Amias C. Andros. It became clear in the roof renovation project of 2005 that the workmen on the original job in 1887 had concealed objects in the roof-space to ward off evil spirits—a fairly common practice of the time, but largely kept secret by the workmen.

The bay window of the Bailiff's dining room was extended up to the first floor to provide a reading room, the pillared portico was transferred to the rear entrance, and the interior lined floor to ceiling with bookshelves. The furniture was provided by Fuzzey & Co. The Library was at first known as the Candie Library, since Osmond had not wanted to be commemorated for his generosity, but his name is now forever associeted with it. There is a portrait of Osmond by Hewitt over the fireplace, and above the fireplace opposite there is a brass plaque on which is inscribed in Latin:

I, a Sarnian, Osmond de Beauvoir Priaulx, have placed my books, the solace of my life, in this library, and given them for ever to the people of Guernsey, in the 82nd year of my life. As they have profited me so may they profit you.

The Library was finally opened in 1889. When Osmond died in 1891, he was cremated, following his wishes (very progressive at the time), and his urn placed in Candie House, where it remains on view to this day.