In the Star of the 11th ultimo we gave, from the Shipping and Mercantile Gazette, a brief and very imperfect account of the death of this amiable and very promising young officer; and we now insert the following letter, which appeared in an Irish newspaper, the Downpatrick Recorder, of the 13th ultimo. As this letter contains many more details than our previous extract, and as it speaks of the deceased in terms which must be highly gratifying to his relatives and friends, it will be read by them with mournful interest, the more so as neither the name of the writer or receiver is known here.1 Mr Tupper was serving as a mate, the news of his promotion to a lieutenantcy in May not having reached him when he was so suddenly cut off at the age of twenty-one—another victim of that sad and singular fatality which of late years has attended so many of his name and family2—

I am sorry to say that we have just suffered a irreparable loss in the death of our second mate, Tupper, who was killed along with one of our petty officers named Kennedy, by the natives of Tanna, four days ago. Poor Tupper was, without exception, one of the most aimable and promising young officers I have ever met with, and, as you may suppose, was a general favourite. We used to call him 'the pride of the Iris'; he was such a noble, handsome-looking fellow, and as good and simple-hearted as he was handsome. I was greatly attached to him, and feel as if I had lost a brother.

Some time after we had paid our last visit to Tanna, the captain of a sandal-wood trader and two of his boat’s crew were murdered by the natives, who are the most desperate and untamed in these seas, so we came up determined to punish them, since lenient measures had produced no effect. We left Aneiteum on Tuesday 29th and early on Thursday morning, July 1st, anchored off the beach, where the murders had been committed. We had with us three trading ships, whose crews of natives were very useful in clearing the bush. The evening before, we had captured the second chief of the very tribe we had come to punish, as we were running down the coast; so we clapped him in irons, and on the morning of the 1st, after getting the ship within a few hundred yards of the place, we opened fire, in the hope of clearing the scrub, before our men landed. Every one, as far as we could judge, had decamped, as soon as they saw what we were preparing to do, so, after an hour’s firing, we manned and armed all our boats, and pulled in for the beach, intending to destroy the villages, cut down the cocoa trees, and root up the plantations, considering that this would be a sufficiently severe lesson.

When our fellows landed they found the bush so dense that it was with the greatest difficulty that they advanced to the villages; although only a couple of hundred yards from the beach, the paths, as in all those islands, are barely wide enough for one man to go on at a time, and are so built with dense walls of vegetation, that none but a naked savage could get on except by them. They appear to have been unusually difficult and intricate at Tanna, so much so, that the parties almost immediately lost sight of the water, and often lost one another. They burned the houses and then all hands turned to, to cut down and destroy—no natives being visible, although their yells were heard all around. From the ship, every point where a native showed himself on the rocks, or on the clear hill beyond the villages, was swept by the large guns, and thus they were prevented from attacking in any large bodies, the very sound of a shell sending them flying for a mile or two. A good many of them, however, seem to have stuck to the jungle, and to have followed our men throughout. In the smoke and excitement, Tupper and three others separated from the main body under Captain Loring; and trying to regain it, only involved themselves deeper in the wood. They appear, however, never to have been more than four hundred yards away, and yet they could not extricate themselves. All at once they found themselves surrounded by natives, who crept up around them on every side, throwing spears and forcing them into the thick jungle. Tupper got two spears in his body, one he took out himself, and the other one of his men removed. They were very well armed with revolvers, and seem to have killed several of their assailants, who became more wary. One of Tupper’s men was wounded, but very slightly, and as they were forcing their way back to the sea, in crossing a small open space, their assailants made a rush on them, and in the melee and confusion, Tupper and Kennedy (the captain of the hold) were overpowered. Through God’s mercy the other two escaped, and within a few minutes, came right upon the main body. I suppose the savages, being so occupied with the two they had killed, so as to forget the other two for a moment, our men, with the Captain and First Lieutenant, advanced as far as they could towards the place where Tupper was last seen, but they either did not hit on the exact spot, or the savages hearing them approach, had disappeared, for they neither saw nor heard anything, but following one of the paths they found, by the most wonderful chance, poor Tupper’s body, bearing marks of having been dragged some distance; of Kennedy’s body they saw nothing, and doubtless it had been carried off and eaten.

Tupper’s remains were brought on board, and a more melancholy evening was never spent on board the Iris, for the two we had just lost were, each in his station, men that we were justly proud of, and whom everyone respected and loved. The next day, every man that could be spared was landed at the same place, and the work of destruction completed, but not a native was to be seen. So in the evening we got under way, and poor Tupper’s body was committed to the deep some miles off the island. 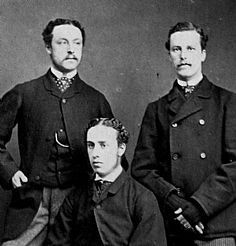 1They add: 'We understand that Mr C W Tupper has received from the chaplain of her Majesty’s ship Iris a very beautiful and consolatory letter, in which he fully confirms the eulogy in the subjoined statement, and bears most feeling testimony to the excellent qualities of his gallant son, whose loss, he adds, was deeply regretted by all his shipmates.' Edward was the second son of Carré William Tupper (b. 1795), Fellow of Exeter College, Oxford, and Eliza Jane Priaulx, daughter of Thomas Priaulx of Montville. He was born in Guernsey on 27 November 1836, and attended Elizabeth College (No. 841), as did his brothers, James de Vic, Basil de Beauvoir, and Jasper Selwyn. He entered the navy in 1850, and was appointed to HMS Dido. A silhouette of him as a teenager was sold at auction in 2006; this and a portrait miniature of his father was purchased by the Candie Museum in Guernsey. A portrait miniature of him in his naval uniform was sold in 2005, as was a portrait miniature of his mother, painted in 1825 by Mansion, and two of his father, in 2005, as well as portraits of others of the immediate family. The whereabouts of these are unknown to us. The letter from the chaplain of the Iris, and the life and naval career of Edward Tupper are detailed in Sarnia: or brief memorials of her many sons, civil, military and naval, 2nd. Ed., 1862, pp. 78 ff., published by Le Lièvre in Guernsey. Below is a photograph of his father, C W Tupper, and above of his mother, Eliza Priaulx, from the Library Collection. The three young men are his surviving brothers.

2 See, for example, Duncan's The History of Guernsey, Appendix pp. 598 ff., Memoir of the late Lieutenant Carré Tupper, RN, and F. B. Tupper's Family Records. The Tuppers were a very unlucky family, but then they did produce a large number of boys, who were brave, liked entering the armed forces, and seem to have had recklessness as a family trait.