A stroll through town as it was 70 years ago 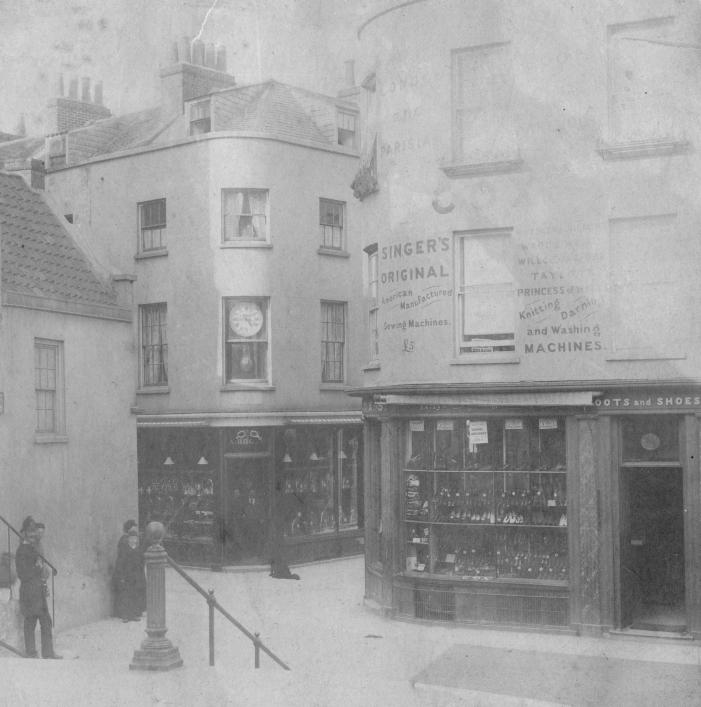 From the Star, July 1944. Funeral cheese and scarlet eggs, Granny Ogier, and a leopard and a Lamb. The illustration shows the Arcade around 1903; the shops are Roger's the jewellers and Cox's bootmakers.

Octogenarian's memories of the Old Arcade.

Guernsey as she used to be has always held an attraction for her true sons and daughters, and, acting on the suggestions of more than one islander, I sought an interview with one of the best known tradesmen of former years, Mr A I Le Patourel, of 'Buena Vista,' St Martin's, with the intention of reconstructing at least some part of that town which he has known so well.

Mr Le Patourel, although now well in to the eighth decade of life, can place most of the shops and their owners as far back as the days of his youth. With him, I took a stroll in memory through the Commercial Arcade as it was in the 1870s and 1880s. Starting from the High Street entrance, he remembered that the window now occupied by Messrs Bucktrout's tobacco shop was part of one building which also included that of Maison Carré and was the property of Mr F Le Quilbec, a wine and spirit merchant.

On the opposite corner stood Robin's grocery, renowned for its special 'funeral cheese,' which, together with Guernsey biscuits, was eaten for tea au retrait from funerals. Above this shop, where now stands the Jeweller's and Silversmith's Co., was Blackmore's Hotel.

Continuing along the Arcade, on the right-hand side, came Mrs Le Noury's confectionery shop before it was moved to its present more commodious premises; then Mr Paint, a chemist and, if needed, a dentist as well. Next, a book store kept by Mrs Le Lièvre and her sister, Miss Vincent, above whose shop the seeds of the first Guille-Allès Library were planted.

Then a jeweller's shop, followed by one of the leading town grocers, W Brouard, and two shops forming the corner which were kept by an outfitter and a chemist respectively.  Le Cheminant, a name always associated with the Arcade, was established as a pork butcher with sausages of island renown, and across the open space came Ed Valpied's draper's store.

Dupuy, then as now, a chemist, was in those days succeeded by a jumble of houses which were all cleared away when the Arcade corner and its environs were remodelled and rebuilt. Before this happened, however, there was, on this side, a small tobacconists's shop kept by Miss Moullin, where the best cigars were obtainable at 7 for 3d.

Cox's boot store occupied the ground where Smale's stood in pre-war days, then Mrs Arscott's dairy. Mr Spong's Analytical Tea shop, and Taylor's restaurant, a famous meeting-place for country-cousins, took one to the top of the steps.

In the corner was the well known 'Old Post,' a public-house kept by W Dawson, with an eating house adjacent, and down the right-hand side of the Central Arcade ran a tailor's shop; the first grocery of the famous Luff and Co., opened by the late Mr Fred Luff; Mrs Stribley's hat and gown repository; and a toy shop kept by two sisters names Barbé, where Messrs H and F Carré's premises stand today.

Beyond this window to Robin's grocery already mentioned, the Arcade had not been completed in those days, and a row of ugly hoardings met the gaze.

Taking the centre block of shops on the right hand, one found Mr E Le Cheminant, a grocer, on the site of the toyshop of the same name today; David Marquand, a tobacconist, with Harry Kaine's auctioneer's office overhead; then two eating houses, kept by H Tostevin, and the two Misses Lukes; a hat shop and another, the occupant of which escaped Mr Le Patourel's memory; then on the corner now occupied by Messrs A P Roger, was the piano shop of Mr Hartwell.

The remainder of the Arcade was completed by the establishments of Mrs Hunkin, a dressmaker: Mr Black, a confectioner and specialist in wedding cake manufacture and decoration; Monsieur E Beghin, who held a stock of unique French boots, shoes, corsets and similar specialities; and last of all, on the corner now occupied by Miss Mary Toms, was Mr Paint, a jeweller.

Here, then, for enquirers and antiquarians, is a reconstruction of this thoroughfare of 60 to 70 years ago; but perhaps of equal interest is the scene which existed before the present Market Hill was built, and the wide space into which the Arcade space led was covered by a multitude of small houses, seemingly thrown together haphazardly by the passing centuries, and which extended in a gloriously inconsequent jungle almost up to the doors of the Town Church itself.

This part of the town was inhabited chiefly by the French coterie, and the shops and eating houses which abounded in every twist and turn catered for the working man and the poorer classes. Shell and wet fish, meat pies of uncertain pedigree, and sausages capable of standing up in their own right were displayed in the open air for the inspection of the passers-by, who might also purchase for one penny each, if the fancy seized them, eggs boiled in cochineal to a brilliant scarlet.¹

Such was this part of old St Peter Port. A lane ran through the conglomeration of houses from the Church up to where the Fisheries now stands, that site being then occupied by the drapery establishment of Messrs Grut and Valpied. A somewhat eccentric photographer named Myers occupied the premises of Rectory House, a former residence of the Rector of St Peter port, which still stands. [July 13]

When Xmas boxes were plentiful

An interesting supplement to the recent reminiscences of the Old Arcade is supplied by Mr W Stonebridge, of Les Camps Terrace, St Martin's, who writes:

I can remember certain shops that Mr Le Patourel does not mention. Next to Maison Carré, was a fancy shop kept by Mrs Le Lacheur, one of whose daughters died only recently. This was before Mrs Le Noury moved there from Mansell Street.

The shop before Mr Brouard, the grocer, was Mr Rowe, a jeweller of a good class. He mostly had all gold stuff in his window, whereas the other watchmakers would only have silver articles. Mr Brouard's grocer's shop was one of the cleanest shops on the town, and my mother used to send me there to get her tea at 1/- per lb. At Christmas time he used to ask her what she wanted—a dozen oranges or a pound of biscuits.

After Mr Brouard's shop was Mr Lamb, a hatter, and he had in his window a stuffed leopard. Mr Le Cheminant, the grocer, was where the toy-shop is now, and around the corner, about where Mr Jackson's shop now is, there used to be a large drapery and outfitting business kept by Messrs Keyho and Bartlett. Then, I think, came the Post Office, and on the other side, where Mrs Gaved is now, there was a gentlemen's outfitter, Mr Fred Ellston.

In the corner on the left of the steps was a little shop kept by an old woman generally called 'Granny Ogier.' Mrs Arscott also kept a music shop. Where Roger's is now was a grocer named Greenslade, and his shop-front was painted bright green. I was sent there for something many times by my mother, for in those days we used to deal with as many shop as we could, buying one thing from one and something else from another.

A step to fame

Mostly all the shops gave something at Christmas, so, although the working-classes did not get much money in those days, they generally used to have a pretty good Christmas by getting a different Christmas box from each shop.

At the Rectory House was Mr Wybert Rousby [see Guernsey Gossip for biography, in the Library], a theatrical agent and manager. He got my step-sister Eva a job on the stage; she went to New Zealand, where she became one of the leading actresses in Christchurch.

Where the Fisheries is, before Mrs Ferguson had the premises, there was a public house, so was the place where the Library entrance is now. Where the Red Cross bureau is now was another one.

Another grocery was that of Martel, on the site of J R Richens, in Market Street, where my mother sent me many times to get their famous breakfast ham. [July 20]

The day after Midsummer used always to be the day of the fair, held at the Fair-field at the Câtel. It was crowded from the early morning by the entire population of the island, and the hedges round the field, and even the sides of the road in the vicinity, were filled with French women, selling strawberries, and eggs dyed red with cochineal, and who drove a roaring trade.