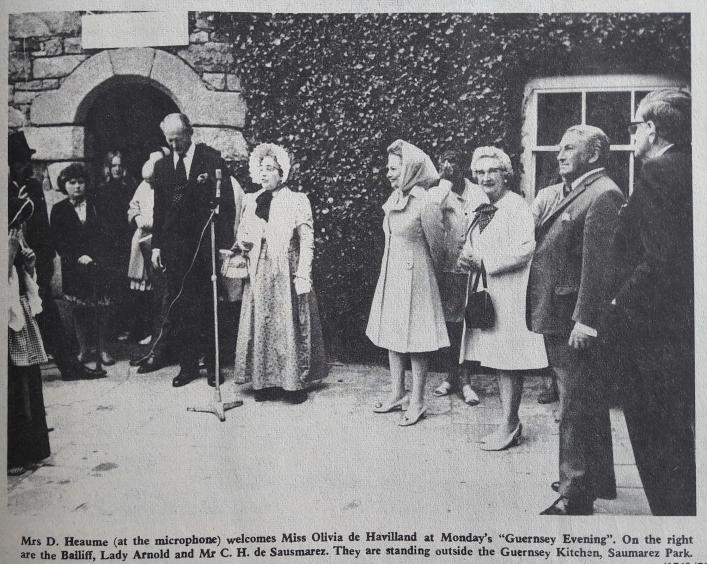 For a few hours on Monday, Saumarez Park returned to the 19th century. The occasion was the Guernsey Evening, held at the Folk Museum and in its environs in aid of the Museum's funds. To say that it was a pronounced success is no more than the truth. The sun shone, crowds attended and the money rolled in.

Gracing this delightful occasion was Olivia de Havilland, the famous actress of Guernsey descent. The Bailiff and Lady Arnold were there, with Lt-Col F G Macartney (president of the National Trust of Guernsey, which sponsored the event), representatives of La Société Guernesiaise, Count Blücher (whose residence, Havilland Hall, was the home of Miss de Havilland's ancestors), Miss M Bonamy Collings, and a great many more, with visitors included.

Miss de Havilland arrived by carriage, one of the museum's exhibits. It was driven by Miss D C Meldrum, and, later, it was available for carriage drives around the park, with another horse-drawn conveyance. Miss de Havilland was accompanied by Sir William and Lady Arnold and Mr C H de Sausmarez.

Mrs D Heaume greeted Miss de Havilland in Guernsey French and for the benefit of the uninformed, Mr de Sausmarez translated her words. She welcomed all and said she hoped they would have a happy evening.

Mrs Heaume introduced Miss de Havilland, whose great-great-grandfather was a Bailiff. All appreciated her presence; she had come especially from France to attend, stated Mrs Heaume.

The Bailiff and Lady Arnold received a greeting.

Mr de Sausmarez said Miss de Havilland was his cousin, and, while she had 'gone with the wind,' all over the world, there was a little whisper in her heart, one of longing for Guernsey.

Miss de Havilland expressed thanks for her most charming welcome and said it was a special pleasure to be present. She referrd to the costumes, crafts and customs of the isle of her ancestors and said that on her previous visit, last year, she had been greatly interested in the Follk Musuem.

Since then it had been enriched by the efforts of its committee, which gave it added interest. She understood the number of visitors had exceeded last years' figures and that there was an increase of £100 in receipts. She looked forward to seeing the exhibits and dancing, organized by those who had regard for the lore of the island. She ended with a few words in Guernsey-French, to the delight of all.

The official visitors then toured the museum and its surroundings and they had much to see. In an atmosphere of patois and old-time Guernsey attire, they watched a man making a crab-pot; they saw gâche being made; they watched the manufacture of butter; they saw innumerable reminders of the Guernsey of yesteryear on the stalls. There were cars and carriages in various places and horses were very much in the picture. The visitors saw a demonstration of knitting and scoop-making and also beautifully-made Cobo dolls, dressed in traditional costume, like those who sold them. Guernseys were also on view.

The goods on the cake stall were most appetizing and all manner of excellent things could be purchsed there, including gache, Guernsey cracknels, soda bread and apple tart. Again, the vendors were in island dress.

Guernsey 'treasures' were on sale and one of them was presented to Olivia de Havilland by little Caroline Winder. It was an old print of the island.

Other good things available were pickled ormers and fine produce. Cider and gâche were available, too, and the three varieties of this cake were on sale. The vendors, of course, dressed in the fashion of yesterday.

An Evening Press reporter had the pleasure of riding in a carriage made by his grandfather in 1895. It is now an exhibit at the Folk Museum but it reverted to use that evening and was driven by Miss Meldrum.

Mr F W Falla, standing on a cart, was the commentator. The singing and dancing took place in the courtyard; the exhibits were, for the most part, in the museum, and some of the stalls were nearby. The bookstall, where one could also purchase old prints, was in the Guernsey Kitchen.

There was delightful dancing by children of Castel School. The girls looked very pretty in their island dress, while the boys wore guernseys. Equally enjoyable was the dancing by members of L'Assembllaie d'Guernesiaise. The singing of Mr Eddie Jones was very well received, while the music of the accordionist was much appreciated.

The entire event was a marked success. Thre was informality; there was good fellowship. Those who entertained and sold goods did so with good cheer. The crowds enjoyed every minute of the evening - and so did those in charge of the museum's funds!

It is to be hoped that something as good as this will be offered to the public next year, for there is no doubt entertainment of this special kind is most acceptable.