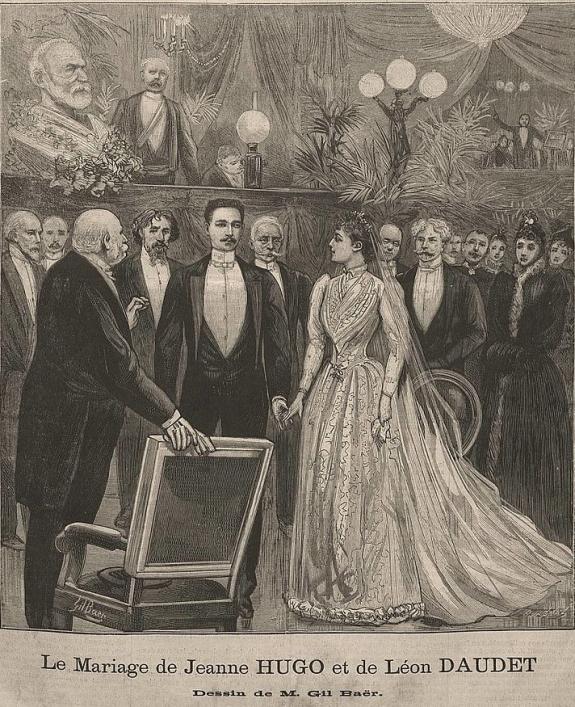 Jeanne Hugo, the granddaughter of the sublime Victor, and the spoilt child of the world of art and of letters, has received a long walrus-tooth formed into a paper-cutter. On one side is her monogram, ‘JH’ and on the other the inscription, 'Produit de la chasse de la Vega dans la mer polaire offert à Mlle Jeanne Hugo par A E Nordenskjold.'/ (From  the voyage of the SS Vega in the Arctic Ocean, presented to Mlle Jeanne Hugo by A[dolf] E[rik] Nordenskjold.) [Glasgow Evening Post, 5 June 1880.]

Léopoldine Clémence Adèle Lucie Jeanne Hugo was only eleven years old when this little article was written about her, the report of a gift from the leader of a famous Swedish scientific expedition to the Arctic.  Her starring rôle along with her elder brother Georges in the immensely popular book of poetry that Hugo had published in 1877, L’Art d’être grand-père, and the fact that Hugo was the children’s guardian meant that for those who were admirers of ‘the sublime Victor’ they had the status from a very young age almost of royalty, basking in their grandfather’s golden glow. As Jeanne grew she seemed to glide serenely through the fame. Always accompanied by her mother, her social life was enthusiastically documented in the newspapers.

Victor Hugo died in 1885. The Hugo family had a close circle of friends, and Jeanne followed the family tradition by falling in love with one of them, Léon Daudet, the son of the very popular novelist Alphonse Daudet.  Handsome, of the same age as the Hugo children, he was Georges Hugo’s best friend. At the time, Léon Daudet seemed the perfect match, as many contemporary newspapers remarked. A marriage of love, both wealthy (although Daudet much less so than Jeanne), both from literary families, both brought up in the company of the greatest literary minds in contemporary France! Jeanne had to wait until she reached her majority to marry, as Victor Hugo, no doubt mindful of his late daughter Léopoldine, whom he had perhaps seen reborn in Jeanne, had inserted a proviso into his will that meant she would not receive the main part of her sizeable inheritance if she married earlier. Jeanne decided the marriage at Passy should be a civil one, out of respect for her grandfather; it attracted large crowds of onlookers and was attended by the glitterati, who heard long eulogies to Victor Hugo and comparatively little about the happy couple.

At the time Léon Daudet was a great admirer of Victor Hugo, and appears to have remained obsessed with him for years. From 1885 he attended medical school with Jean-Baptiste Charcot, the son of a world-famous neurologist and friend of his father’s, Dr J-M Charcot. For a while they and Georges (who did not attend university) were great pals, having fun running amok in Paris, fighting, drinking, politically active republicans, getting into the newspapers for their outrageous behaviour; but then Daudet failed his exams. He mortally offended Charcot by claiming that he only passed his medical examinations because his father was their professor. Charcot never forgave him.

After his marriage in early 1891 he published his first novel. His mother had hoped that marriage to Jeanne would quieten him down, but his political views changed and hardened. He became a monarchist; following the publication by his father in 1886 of Edouard Drumont’s La France juive he had become virulently anti-Semitic. He was, however, able to remain close to Georges Hugo for some years despite Georges’ many Jewish friends. Like his father Alphonse Daudet, Léon was passionate about politics, irascible and easily offended. He was prone to fighting duels.

Léon and Georges were united in their dislike of Georges’ stepfather, Edouard Lockroy, and in later life Daudet reserved nearly as much venom for Lockroy as he did for Emile Zola, one of his main bêtes noires (although he had known him too from childhood). Jeanne had a son by Daudet, Charles, but the marriage was soon in trouble. Daudet tells us that in 1885, he decided, while at Hauteville House sorting out Hugo’s belongings with Georges, that he would one day write a novel:

We were submerged in relics. At that time I got the ambitious idea of writing a monograph about a genius, in his particular field, including a study of his entourage. But I didn’t get around to writing The black star for eight years, until 1893, in that same house where I discovered, in 1885, the remains, the crumbs, the debris of Hugo’s fat head. Although I tried to disguise reality as much as I could, something of the truth remained, and when Lockroy read the proofs (anyway he hated Hugo and Hugo hated him) it caused quite some drama. Hauteville House is fated to host scenes, and would have been a perfect place to be included in the remarkable book by Edouard Estaunié: Objects talk.

He wrote this novel, The black star, while sitting in Hauteville House with his wife, Victor Hugo’s beloved granddaughter, only two years in to their marriage. Jeanne divorced him in 1895 and was awarded custody of the children, whom Daudet (who had issued a counter-divorce suit) was prevented from seeing for thirteen years by Edouard Lockroy. Jeanne then had a couple of failed engagements in quick succession, before marrying Dr Jean-Baptiste Charcot, all-round boys’ own hero, in 1896. Daudet and Charcot fought a duel, inevitably. Charcot was livid that Georges, who refused to attribute blame for the divorce to either party, did not drop Daudet, as Jeanne had requested. In fact Georges took Daudet’s side (perhaps because of his antipathy to Lockroy). He upset his mother by turning his back on her in the street. In 1898, when the family was attending the first performance of Victor Hugo’s play ‘La Grand’mère,’ Charcot saw Georges with Daudet, stormed over to him, accused him of disrespecting his sister and slapped him so hard he knocked him down. Georges accepted the challenge, and he and Daudet both sent seconds, but Charcot changed his mind. The next day they were in court. Apparently Jeanne Hugo had been very upset that Georges continued to take Léon Daudet to visit Hauteville House, a place so special to her. Charcot said that he and Georges had been friends, but that Georges had refused to speak to him after the divorce. He, Charcot, had only wanted to help an unfortunate young lady rebuild her life. A horrible scandal, written up with relish by the newspapers who compared the two sides to the Montagues and Capulets. In the end the court decided it was six of one and half-a-dozen of the other, and fined Charcot 50 francs.

Sadly, Jeanne did not take into account her knight in shining armour’s ambitions to be an explorer. She divorced Charcot for desertion, serving the notice when he set out for the South Pole, and in 1906 settled down with a Greek naval captain, Michel Negroponte, who died at the early age of 42 in 1914. Jeanne sent Canon Bourde de la Rogerie some money for the poor children of Guernsey in remembrance of him. She came to Guernsey in 1927 when after Georges’ death she and his children handed over Hauteville House to the City of Paris.

Daudet last spoke to Georges Hugo in 1903. He married his cousin and had another son, Philippe. He wrote a biography of Victor Hugo called The tragic life of Victor Hugo, which he claimed was based on material he had learnt from the family. Although Hugo’s life was in many ways tragic, the same could be said of Léon Daudet, whose son Philippe fell in with the anarchists (the polar opposite to his father) and who committed suicide at the age of fourteen by shooting himself in the head with a gun he had been given in order to commit a political assassination. Léon Daudet would not accept this and was determined that his son had been murdered. He went to prison for libel, escaped, went on the run, was pardoned. He renounced his antisemitism in 1929, disliked the Nazis but was quite keen on Mussolini. He died in 1942, supporting the Vichy administration, having written 9000 articles and 128 books. The devil does indeed have some of the best tunes, because Léon Daudet was a brilliant writer. Jeanne, who was extremely proud of her heritage and spent a great deal of time safeguarding her grandfather’s memory and estate, died in Paris in 1941.

Jeanne's autograph, along with those of other members of the Hugo entourage, is to be found in the Priaulx Library's The Album of Maggie Lelean. Maggie was the daughter of a sea-captain, and she and her sisters were near neighbours of Hugo and his grandchildren in 1878; they played with Georges and Jeanne at Hauteville House.