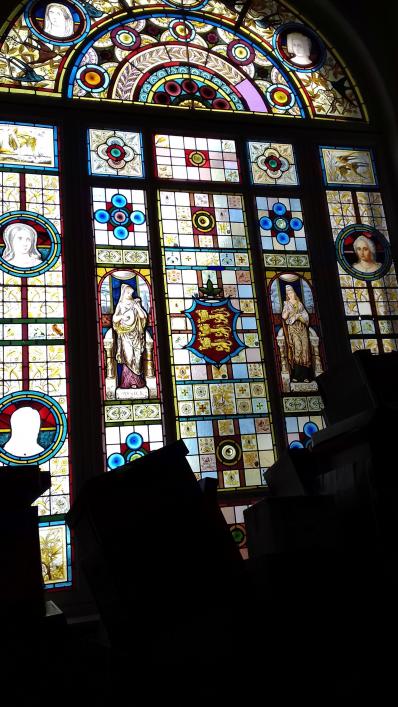 As always, we have received some exceptional material this year from very kind and generous donors. Above: the Guernsey Arms circular-headed window from Jane Mahy's report on the stained-glass windows of Grange House, one of this year's donations.

June Cunningham of Guernsey gave us a tablecloth, beautifully embroidered by past members of the WI, c 1950. [Strong Room]

Mrs Ede-Golightly donated her report How the Ladies College building in the Grange was used during WWII, together with her colleague, Jane Mahy (Ladies' College Guild), who gave us a copy of her investigations into Ladies College Guild Stained Glass Windows sited at Grange House. Mrs Ede-Golightly also gave us a copy of a Melrose Girls' School report on Lilian Dingle.

S & A Carey gave us a copy of the Guernsey and Jersey Magazine Vol V (1838) and Vol 1V (1837), and Geoffrey Gale of Norwich A pedestrian tour through the islands of Guernsey & Jersey by William Walmesley. (Ed. K. Renault),

Miscellaneous books: from Averil James of Wraysbury came a book by a former Librarian, On Service by Capt. J. Percy Groves; Tony Bussell gave us 10 days, one Guernsey Summer; Bert Enevoldsen gave us a copy of his A Guernsey School Boy in Wartime; Rosemary Kelleher of Camberwell, Victoria, Australia donated Serfs, Subjects and Citizens by Mary Clare Kelleher and Patchwork Prisoners by Trudy Cowley and Dianne Snowden, about transportation to Australia; author Sarah-Jayne Lainé donated a signed copy of her recent An Animal Anthology and Fred Gallienne a copy of his The Harassment of Mr De Bré.

Valentine Fallan of Hastings donated the 'Gerzey' section of a copy of the Cassini map.

Mrs Elizabeth Calvert of Boston Spa donated maps from her grandfather, (Allan R De Carteret, author of the Fief of Sark); and The Fief of Sark (with A H Ewen).

D E Guilbert gave us The House of Mackay, and Sylvia Jopson of Brentwood donated a Pringle Family History.

Brenda Searle's Personal account of the evacuation from Guernsey and experience as an evacuee, donated via Zoe Ash. In People's War box (Strong Room),

Les Bourgs Hospice Shop kindly passed over to us thirty assorted local prints and a copy of Matthias Finucane's print 'Market Square' and its key.

David Le Conte, the Librarian and archivist for La Société Guernesiaise, gave us an engraved plate of a Paddle Steamer; assorted books and pamphlets; and material re the De La Rue company, Papermaking in Britain; Portals, 250 Years of Paper Making; and Portals.

Trade and commerce: Brian Barnes gave us items re Le Riches stores, including a photograph of the founders of the store, and one of delivery trucks; other photographic items; store history, examples of headed paper, an advertisement, share certificates and company records. Tony Jehan gave us copies of two volumes he has written concerning the history of the Ironstores.

Dr Philip Wood of Newport, IOW, sent us six Star newspapers from the Occupation period. Dorothy Dowding also gave us copies of newspapers from the occupation. From Mrs Penelope J Matheson of Limassol, Cyprus, came a copy of Frank Falla's The Silent War and The Guernsey Weekly Press of 15 May 1945.

Lloyd Le Tocq donated a copy of the important Atlas Linguistique et ethnographique normand par Patrice Brasseur, v. II, which was given by the author to Harold Naftel, who in turn presented it to Lloyd Le Tocq. We will be having this bound. Peter Gill gave us The Memoirs and Correspondence of Admiral Lord de Saumarez, Vols 1 & 2, and Juliet Campbell of Oxford One small island and two world wars: the life & times of Major General Wilfred d'A Collings.

From John David. Papers of the Reverend John Guille: a five-year diary including an account of visit to Sark;  Sark diary August 1956;  photographs & Kodachrome slides.

Our colleague Margaret Edwards gave us a collection of 75 cards and postcards of local scenes, and Mrs Jennifer Frith of Southam a photograph and postcard album of 1929 with views of Guernsey, Sark, Herm and Jethou.

Mr Byrom donated several volumes of The Report and Transactions of La Societe Guernesiaise Transactions and the 1969 Bulletin of the Société Jersiaise.

Gordon Dawes donated the excellent Paris 1259, published by the Guernsey Bar in 2016.

Tom Le Pelley gave us a collection of newspapers with articles about royalty, and a Bible.

Mark Lamerton of Jersey donated a Postcard and three negatives of the Little Chapel.