Elie Brevint (1587-1674) was minister of Sark from 1612. His father Cosmé, also a minister, was a Huguenot refugee from Angoulême who had accompanied Helier De Carteret from Jersey in his colonisation of Sark. Transcriptions and microfilm of Elie's 14 Notebooks, which were found in a loft in Sark in the 19th century, are held in the Priaulx Library. Elie appears to be a sensible and rational man with a curious and detached mind, until he turns to these sorts of subject: the Pousseresse, perturbateurs, and salamanders. The illustration is of the Tormento do Tacto, or Torture, from Alexander Périer's O Desengano dos Pecadores of 1724, in the Library.

Judges cannot order a witch to lift a curse without becoming implicated themselves in sorcery; the Pouseresse; Common people cannot distinguish between magic and natural causation; The sorcerer Mauger; Demons and dangers to be found in nature; Trumpet of doom; A sceptical judge soon changes his mind; Fern seed; Quakers.

It would seem reasonable for a judge to be able to order a witch to go and cure or lift a curse, as they say, because the witch can do this without any new communion with the Devil; but the judge would appear to share some of the guilt in encouraging the witch to lift a curse or cure someone of witchcraft, as a witch cannot do this without the Devils’ involvement in as much as he is his servant or slave. So much so that in this case the judge, because of his position, can no more order this to be done legally than can an ordinary individual. [§48]

As for night terrors and writhing about, the Pousseresse, which the Romans called Incubus, doctors agree that it is an entirely natural affliction. Sometimes, however, experience shows that witchcraft is involved, because if it were only the result of a melancholic humour the violent effect would not appear and disappear so quickly; nor would those people who had been troubled by the Pousseresse who poked around their bedroom afterwards with a sword and closed all entrances into their house thus prevent themselves from being affected by it again, as is the case. It even affects people who stay awake or sleep on their sides, and leaves them instantly when they start moving around, whether they shift about a little or a lot. Even those who are under the spell but feel it without actually moving (?) feel and hear something wriggle about on top of them, and before they are shaken, or afterwards, they hear something jumping down to the ground, like a cat or dog. Some people have even managed to grab hold of this thing, and after they have flung it away from them have found a kind of mucus the next morning. Indeed there is a story of a man who was afflicted by a witch writhing about on top of him and giving him night terrors; he placed a piece of wood with a knife blade sticking out of it on his chest, and next morning the witch was left dead on top of him, run through by the knife.

[From the trial of Isabel Becquet for sorcery, as trancribed in Guernsey Folk Lore:

Item; that the children of the said Isebell said one day to the children of the said Gallienne, that if their mother was ill it was because she had spoken rudely; that some time afterwards, Mrs. Gallienne being in bed in her room, the door being shut and simply a sky-light (une luquerne sic, lucarne) open, she felt something like a cat, which, little by little, crept on her chest as she lay on her bed. Having shaken it to the ground, she heard one or two growls, on which, astonished, she began to threaten it that if it was a wizard or a witch she would cut it to pieces (que le couperoit en pièces), it returned by the said sky-light.]

Some people think that the Devil cannot do anything beyond or against nature. So, if you try to answer that by saying that the Devil can, however, stop ordinary fire, for example by cooling a oven being used for cooking meat, they will counter that this is simply fooling the senses, that is, an illusion, or that he is doing it by secretly applying something to prevent the fire lighting naturally. For example, if I place lead shot in a saucepan of water the water will never boil, because its magnetic properties will attract the iron and the iron more iron, which is a purely natural causation; the common people will nevertheless believe this to be a miracle or magic.

People say they witnessed a cloud come up from Herm, and from there travel across to the dungeon in Castle Cornet where a certain Mauger, afterwards burned for witchcraft, was imprisoned; and that the cloud broke up and vanished over the Castle, and that the fishing boats it had passed over capsized. [Pierre Mauger fils James, sentenced together with his wife Anne Grut and Jeanne Le Roux, wife of Collas Agenor of Beaumont in Normandy, 26th July 1605. Burnt at the stake.] 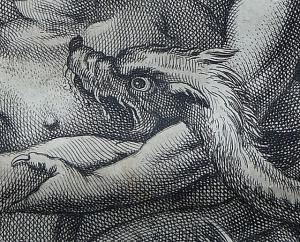 There exist troublemaking demons (perturbateurs) in the form of frogs who like to live in foul mud; or in the branches of cedars of Lebanon, falling on people who are resting in their shade and overwhelming them.

Salamanders live inside hollows in fruit trees, and bit by bit dry them up and kill them with their heat.

The shade of the yew tree and oleander is poisonous.

It is said that occasionally at the Marsh Castle in Guernsey people hear a trumpeting or braying like a donkey, so terrifying and violent that it makes saucepans fall off the dressers; they take this as an omen of imminent death.¹ [§156]

They say there was a Judge who did not believe in the existence of witches. Several of his cows and sheep suddenly died. However, after this loss, which he attributed to sorcery, he became very keen on punishing witches. [§178]

It is said that someone is using the Fern Seed, when, making use of a Book of Magic or some other means he communicates with the Devil, who gives him powders to enable him to attempt and commit various wicked acts, such as opening locks, violating women and girls, &c. In return he must give his Master a living animal, such as a cat or dog, otherwise the Devil will hunt him down and kill him.

There were two magical versions of fern seed commonly held in reverence. Fern seed in the form of spores was regarded as very potent, if you collected it properly; kept in your pocket on Midsummer Eve, for example, it bestowed invisibility. The powers that Elie assigned to the seed do seem to imply some sort of invisibility, but are akin to another belief, common outside the islands, that on solstice nights, Christmas and Midsummer Eve, the fern produced a blue flower and from that a magic golden seed. This seed was more powerful than even a mandrake and the Devil himself would 'lay the table' for its possessor.]

§479 Some say the Quakers, or Tremblers, are possessed by the devil or are wizards (enchanteurs).

[From the French: DAB]

¹ See the phenomenon known as 'Le Canon des Isles' in Report and Trans. of the Soc. Guernesiaise XII (1935) pp. 265-6. In the Report and Transactions of 1922, p. 91, Edith Carey reported that 'At Les Vinaires, a house belonging to a Mr Brouard, pots and pans in the dairy rattle as a warning before death. This happened as recently as the early part of this year.'

The Notebooks remain in Sark. The Library has a copy on microfilm of the original notebooks, that can be consulted upon request by visitors to the Library, along with the Sark court records for the period, also on film. A full French transcription with original spellings is to be found in the 4-volume Les Notes Manuscrites d' Elie Brevint, pasteur de l'Ile de Serk, copied by J. H. Carteret Carey in 1900, 'from Mr C. J. Cox's copy of the copy by the Reverend George E. Lee, Rector of St Peter Port, Guernsey. ' The numbers refer to pages in Cox's copy. George Lee made the following notes:

'Elie Brevint, son of Cosmé, lived in Serk from 1612. Died in Serk in 1674, aged 87. Presbyterianism was abolished after his death, and Moïse Bénoist succeeded him, being ordained by the Bishop of Winchester.' His house in Sark, built for him by the Seigneur, still stands; George De Carteret had paid for his education in Saumur. His hero-worship of the De Carteret family is evident throughout his notebooks. He married Susan Slowley in 1626; she was likely the daughter of a controversial Sark jurat, Robert Slowley. His brother Daniel was a minister in Jersey. His son, also Daniel, Elie's nephew, was a notable divine, writer, and fellow of Jesus College, Oxford, who preached to the King in Jersey in 1649. Daniel Brevint married the daughter of the royalist Lieutenant-Governor and Bailiff of Jersey, Philippe De Carteret, and exiled himself to France for a considerable period. Another nephew, Josias, was also a minister.

Elle was proposed to the Colloque of Guernsey by 'Mr De St Ouen', that is, De Carteret, as a suitable candidate for the Sark ministry in December 1611, as 'he had been sponsored in his studies for this purpose'; he was examined, found to know his stuff and to be 'prudent and worthy', and told to begin a trial within the fortnight. [Actes du Colloque, Vol. II p. 202.] His sermons went down well; two Sark elders testified on his behalf, Raulin Vaudin and Pierre Le Couteur, and he was permitted to take on the ministry of Sark, in compliance with the request of 'Monsieur de St Ouen, patron of Sark church' [p. 205].