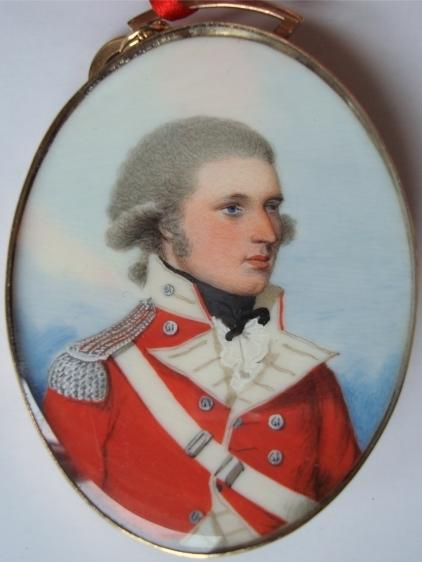 The first is a letter from Dover written on the 17th August, 1812, by John James Barlow, of the 61st South Gloucestershire Regiment, to Major Robert McCrea,1 in Guernsey. John James Barlow had married Nancy Coutart in Guernsey, when the first battalion of his regiment was stationed here; his marriage is discussed in a letter of 1797. His brother Frederick Barlow had then married Nancy's cousin, Maria McCrea, daughter of this Major Robert McCrea addressed in the letter. John James and Frederick were sons of the first commanding officer of the 61st Regiment of Foot, John Barlow.

The McCreas were a military family with Irish and American connections resident in Guernsey. Frederick Barlow and Maria had two children, of whom one, their daughter, Jane Maria, survived to adulthood and married Philip De Saumarez, R.N. Her diary is held in the Library. Frederick, whose portrait miniature, held by the Soldiers of Gloucestershire Museum, by Irish artist Buck, is shown above, bought his Lieutenant-Colonelcy just before he died at the Battle of Salamanca, a month before this letter was written. John explains in the letter that this purchase had left poor Frederick's widow and child virtually penniless, and asked Maria's father, Major McCrea, to help them with a pension. Jane was very young; Maria spent several years in Paris and Europe after this with Jane.

The second set of material is from Sark, and concerns William Toplis, the artist who illustrated The Book of Sark. Included are receipts for artist's supplies from John Bryce Smith, of London, dated 1907 and 1915, and from Valpied Brothers of Guernsey, builders' merchants, dated 1916, and a letter adressed to Toplis at La Maison Rouge, Sark, from R. Jackson, an admirer of his work at the time resident in Belgium, but who had obviously spent time in Sark as he was acquainted with both Toplis and John Oxenham, the author of the text for The Book of Sark. Jackson has just received his copy and is delighted with it. There is also a studio photograph of as yet unidentified young man posing as a hunter with a rifle, taken in Durban, Natal.

The third set are letters and transcriptions from John Le Page, a sailor on HMS London, back to his family in Guernsey. He describes the siege of Sebastopol, in which the navy played a major part; he died only a few days after his arrival, in October 1854, and one of the letters is from the doctor at Sebastopol informing his family of his death. He had a child, Jack. This Le Page family has links to the Daddo family but as yet is unidentified. There are also letters from the mid-1860s from the Le Page family in the gold rush town of Port Albert.

¹ Gazette de Guernesey, 20th January 1810: 'That part of the house called the Brasserie which is at the moment occupied by Major McCrea, is to buy or let. Apply to Miss Elizabeth Carey.'