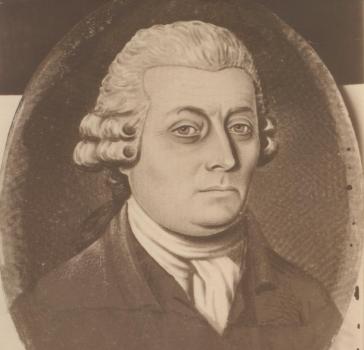 John Banister of Virginia describes the Boston Tea Party and the growing disaffection between Britain and New England, including the Battles of Lexington and Concord, to update his business associate, shipping magnate Elisha Tupper. The illustration, from the Priaulx Library collection, is of a miniature of Elisha (1720-1802), in the background of which a date, possibly 1785, is just discernible. The photograph was taken by or on behalf of Edith Carey, c. 1920.

Extract of a letter from Peter Le Mesurier, Governor of the Island of Alderney, to the Right Hon. Henry Dundas, one of his Majesty's principal Secretaries of State, dated Alderney, the 25th of December 1797. From The European Magazine and London Review, Vol. 33.

From a letter in the Star, May 2, 1833. The Hibernia, Captain Brend, left Liverpool 6 December 1832, and sank on February 4, NW of Acension island, 1100 miles from Brazil. There were 79 males, 80 females, and 50 children as passengers; 4 of the crew were boy apprentices. 150 died. There were insufficient lifeboats, and they were very poorly maintained. The survivors were rescued by the Guernsey vessel, Isabella.

The case of a Russian ship, the Graf Nikita, from The Political Magazine and Parliamentary, Naval, Military, and Literary Journal, Volume 6, 1783; in which an independent judgment of Guernsey's Royal Court was overturned for British political expediency.

Not dead yet: the curious case of the Speedwell, on the hunt for Americans, March 1812

Admiralty-office, Feb. 5. A Letter from Captain Shepheard, of the Fylla, announces his having captured the French lugger privateer L'Inconnu, of St. Maloes, of 180 tons; pierced for 20 guns, mounted 15, and had 109 men. Her second Captain and four men were killed, and four wounded. Lieut. W. H. Pearson, and W. Read, corporal of marines,were wounded on board the Fylla. [Gentleman's Magazine, No. 84.]

Captain Knapp and the Mayflower, February 1762

From The London Chronicle.

Captain Thomas Saumarez, RN, uncle of Admiral James Saumarez, had a surprisingly easy time when taking possession of the French ship Belliqueux. As a reward he was made commander of the ship and took her on a campaign to the West Indies, but was forced to retire through ill-health. From Sir John Ross' Memoirs and correspondence of Admiral Lord de Saumarez, 1838.

Shock and awe: Thomas Phillips and the Hellburner Infernal, 1693

Thomas Phillips illustrated the famous Legge Report, a survey of the Channel islands completed in 1680. His return to the island he had so carefully studied was to prove fatal to him.

From The Gentlemen's Magazine , XV, p. 694. The Elizabeth , MacKenzie, from Virginia, taken the 15th inst. off Falmouth, by the Lys privateer of St Maloes, and the same night lost on the rocks off Guernsey, but two English and eleven Frenchmen saved.