Hugo's daughter Adèle kept a diary while the family were in Jersey. The original is in the Morgan Library in New York and the Maison Victor Hugo in Paris. In it she records conversations with Hugo during the Tapner affair. Here is a translation of the entry for the 9 February, 1854, a letter from Thomas Falla, John Charles Tapner's advocate during his trial for murder:

Extracts from The Star, September 1916

The Guernsey workman, by Charles Hugo

The decoration of the salle à manger, or dining room, at Hauteville-House, Victor Hugo's residence in Guernsey, was finished in May 1857. Charles Hugo wrote of it: 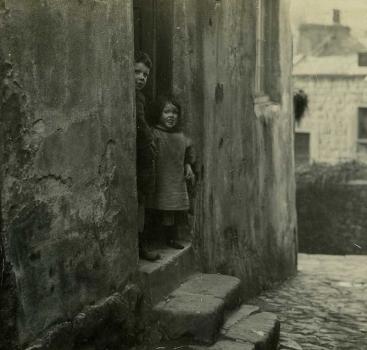 We asked the question: who wrote the following and when? 'Cross a ravine, go down and across Mill Street, into a sort of fissure between two tall houses, climb up a narrow and interminable set of tortuously winding steps with loose paving stones, and you find yourself in a Bedouin village; hovels, cracks in the roads, dirt alleys, burnt gables, ruined houses, deserted rooms, windowless and doorless with grass growing inside them, beams across the road, ruins blocking the way, here and there an inhabited cottage, little naked boys, pale women; you would think you were in Zaatcha.' And gave you a clue: the original is in French.

5th July 2017
An interview with, and the obituary of, 'the oldest man in the island,' Thomas Mauger Gore, carpenter and builder, who helped Victor Hugo realise his vision at Hauteville House and especially at Hauteville II, Juliette Drouet's house in Guernsey. Obituary from The Star of Tuesday March 6, 1928, interview in the same newspaper,  July? 1927. Part of the Victor Hugo and Guernsey project.

Victor Hugo and Guernsey: A visit to Hauteville House, 1883

28th June 2017
From an American publication which lasted all of five years: The Continent, published by Albion Tourgee, Vol 4, 1883, p. 135. An extract from an article, 'The Normandy of the Sea.'

The Parisian Paul Stapfer was born in 1840 and graduated in Classics in 1860. In 1866 he joined the staff at Elizabeth College, Guernsey, to teach French. He calculated that this employment would give him time to work on his doctorate in English literature, and that he could thus both improve his English and observe the doings of Victor Hugo. He was the author of a significant book of memoirs of Victor Hugo, Victor Hugo à Guernesey: souvenirs personnels. This is part of the Victor Hugo and Guernsey project.

When the French government declared an amnesty in August 1859, the majority of political exiles returned to France. Victor Hugo announced that he would return to his homeland only when liberty returned there; he would not accept the amnesty. His friend Kesler pursued the same policy and remained in Guernsey until his death in 1870. This is part of the Victor Hugo and Guernsey project.

9th June 2017
Victor Hugo had a couple of favoured coachmen whom he used to drive him on his excursions around the island. Hugo had a few strictly prescribed routes, and would become almost anxious if pressed to deviate from them. This would sometimes prove tedious for his familial entourage, who would often accompany him; but Mme Drouet was always happy to indulge him. This is part of the Victor Hugo and Guernsey project.